Qom Seminary in Iran seems to have pinned its hopes on Rouhani's ability to reduce international pressure and restore the clergy's standing domestically. 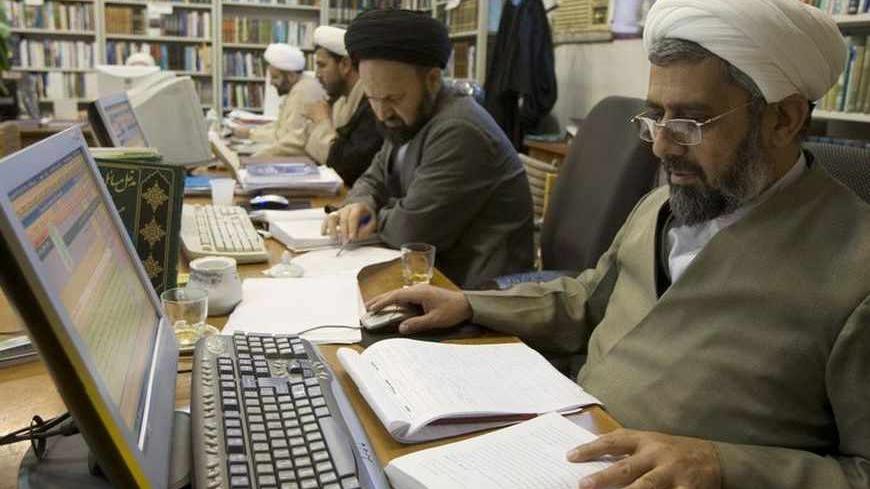 Clerics work on computers at a religious research center associated with the seminary in Qom, 120 km (75 miles) south of Tehran, Feb. 2, 2009. - REUTERS/Caren Firouz

Hassan Rouhani’s victory in the Iranian presidential elections resulted in variety of reactions within Iran’s different social and political circles. Although he is wearing what is the official clerical robe in Iran, the experience of the previous elections show that Hawza is not necessarily allied with, or supportive of, a cleric as the president. From time to time, non-clerical candidates have managed to attract more attention from the influential members of Qom’s seminary with their ideas and policies.

Unlike the first and second term of Ayatollah Hashemi Rafsanjani’s elections, this time around the Hawza of Qom did not have a unified view toward a single candidate. Nor did they have a binary split between two opposing candidates, as in Ahmadinejad’s second term.

Usually Hawza does not give an official opinion regarding the candidates, although the Society of the Seminary Teachers of Qom, try to present the position of a limited number of clerics connected to the establishment as the official position of the Hawza. Generally observing, the body of the Hawza was divided into three sections in this election: the “traditionalist majority” who have traditional right wing tendencies and the two minorities of “reformist” and “radical right.” The traditionalist majority group, which usually shows tendency toward Hashemi Rafsanjani’s outlook and position, in this election and in absence of Rafsanjani, was divided into different branches. Each one of the candidates, except Saeed Jalili, had attracted a portion of this group. Saeed Jalili belonged to the radical faction of Hawza and in particular the group around Mesbah Yazdi.

In light of the above observations, Rouhani’s victory, as a representative for both the traditional conservatives and the reformists, satisfied the majority of clerics in the Hawza of Qom, although some of them had not voted for him. In addition, a general observation of votes cast in the city of Qom also confirms the claim that Rouhani’s portion of the votes in the Hawza was probably high. Rouhani’s votes in this city were more than 200,000 and almost twice as much as Jalili’s votes, the runner up in Qom.

The traditionalist body of the Hawza, in addition to what people expect of Rouhani regarding improvements in the economy and an end to sanctions, also hopes for an improvement in society’s perception of the clerics. Once again a cleric with a moderate and logical outlook has been elected president and his success would naturally improve the general opinion of the clerical establishment.

Among the radical faction of the Hawza, the reactions were different and usually more subdued. Mesbah Yazdi, who is considered to be the leader of this faction, and his supporting entourage had officially endorsed Saeed Jalili. With a very meaningful silence, he has avoided any conflict with the successful candidate and has not reacted to his candidate’s defeat. Previously, in fact only a few days before the election, Mohsen Ghoroorian, a former student of Mesbah Yazdi, had asked him not to repeat the mistake he made in the previous election and basically not to endorse any of the candidates. Mesbah Yazdi was an ardent supporter of President Mahmoud Ahmadinejad until halfway through Ahmadinejad’s second term, when the two had a falling-out. Ghoroorian had previously, on a few occasions, criticised his former teacher and as a result, was removed from the organization that is run under Mesbah’s supervision.

Customary reaction of the radical faction was expressed by Alireza Panahian, a cleric connected to the Basij and the Revolutionary Guards (Sepah, IRGC). In an interview with Raja News, he claimed that using the label “defeat” is a mistake and suggested that his faction is the winner in this election for the following reasons. First, the Principalists had done their duty and thus are absolved in the divine judgement. Second, Rouhani belongs to the Principalists and is an official member of the Combatant Clergy Association (Rouhaniyat-e-Mobarez). Third, Rouhani has avoided using secular and anti-revolutionary words and phrases that is used by the Reformists.  And fourth, his victory was the result of the mistakes made by Ahmadinejad and is not a sign of change in the way society views the Reformists.

From some of the other points made by others connected to the radical faction of the Hawza, it appears that they are preparing themselves for the role of the oppositional, and critical, faction to the future government

Iran’s recent elections, similar to Iran’s all other important events, is closely followed by the Hawza of Najaf as well. In spite of its secular manner, the Hawza of Najaf displays great concern about the affairs of the Shiite societies. Religious authorities of the Hawza in Najaf, in accordance with their common practice, had not endorsed any of the candidates and did not have a position regarding the Iranian election. However, the happiness and the satisfaction expressed by a few of its instructors in an interview with Al-Monitor, coupled with the consistent moderate direction of this Hawza, demonstrates the presence of a positive assessment of the election results.

The most important change worthy of consideration, in relation to the element of the Hawza in this recent election, was its moderate avoidance of political advocacy and the attempt to create a distance between its own religious obligations and the political obligations of the statesmen. This change is evident by the marginalization of the radical faction and the caution exercised by most of the religious authorities, and high rank instructors, in expressing an official opinion regarding the elections. This secularist outlook, if continued and strengthened, will result in an assimilation of the conduct of the two Hawzas of Qom and Najaf.

Ali Mamouri is a researcher and writer who specializes in religion. He was a lecturer in Iranian universities and religious seminaries in Iran and Iraq. He has published several articles related to religious affairs in the two countries and societal transformations and sectarianism in the Middle East.