At a critical time in Lebanese politics, the EU decision to classify Hezbollah’s military wing as a terrorist organization has reopened debate about the party’s participation in government and its right to possess arms. 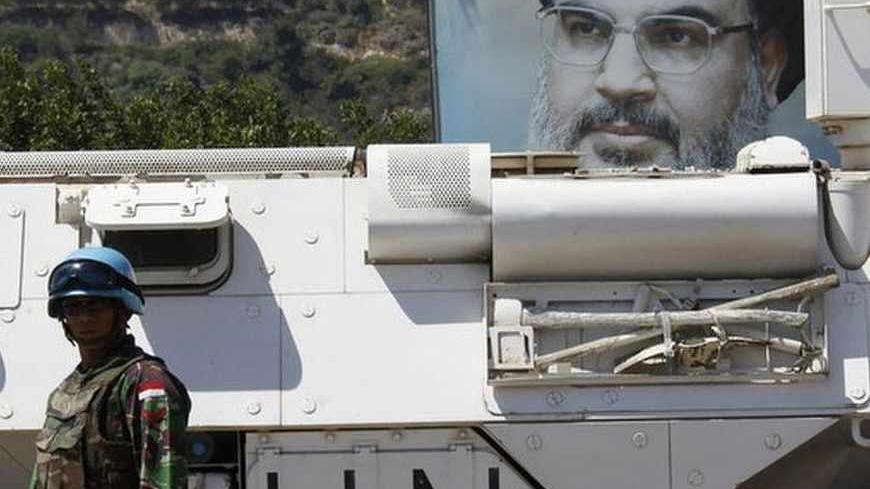 An Indonesian soldier from the United Nations Interim Forces in Lebanon (UNIFIL) stands near a UN armored vehicle as a picture of Lebanon's Hezbollah leader Hassan Nasrallah is seen behind him in the southern Lebanese village of Adaisseh, July 24, 2013. - REUTERS/Ali Hashisho

The EU's decision to include Hezbollah’s military wing on its list of terrorist organizations has not raised the Future Movement’s hopes for finding solutions to the multifaceted crises hitting Lebanon. On the contrary, the Future Movement realized that this decision is a prelude to further complexity in the relationships with this heavily armed party, whose positions and orientations are not subject to local considerations.

High-ranking officials in the Future Movement, headed by former Prime Minister Rafik Hariri, are somewhat pessimistic about the next phase in Lebanon. A prominent figure from the movement told Al-Monitor that those who expect any flexibility in Hezbollah's positions regarding Lebanese internal matters after the European decision do not take into account the fact that the orientations and policies of the Iranian regime — to whom Hezbollah is closely associated, and from which it even receives instructions — did not budge despite the stringent international sanctions imposed on it several years ago. Moreover, this regime found a way to proceed with its nuclear project and expand its influence within the Arab region — especially in the Fertile Crescent, including Iraq, Syria, Lebanon, Palestine, Jordan and other countries. Furthermore, Iran played a role in Bahrain, Yemen and in other Gulf states by betting on Shiite groups that it seeks to control, as was the case with the Soviet Union’s leadership, which controlled communist parties throughout the world during the Cold War.

The Syrian regime also provides an example to Hezbollah, which sent its military units across the Lebanese border to fight alongside regime forces. The regime did not fall, and has not even been shaken by international sanctions. On the contrary, it continues its war against rebels who took up arms against it. Moreover, it seems that this regime is hoping to militarily eliminate armed opposition groups before sitting down at the negotiating table. Meanwhile, the international community and the Arab League are standing by with their hands tied, unable to take any tangible and conclusive steps to calm the situation.

Whatever applies to Iran and Syria applies equally to Hezbollah. Just like Iran, Hezbollah will bear the sanctions and will not deviate from the path followed since its inception in the early 1980s. On the other hand, its opponents — politicians from the March 14 bloc — raised their hopes and expressed their optimism before the international Special Tribunal for Lebanon issued its indictment in the case of the assassination of Hariri and his companions, expecting Hezbollah to hastily seek reconciliation with Hariri's heirs and draw a policy based on seeking repentance.

Those who did so were delusional, given the subsequent developments. The flaw in their analysis is due to an essential omission on their part: that Hezbollah does not even recognize the international community, which it considers under the influence of Zionism and the United States, whose international policy only serves Israel — Hezbollah’s enemy in terms of ideology. Based on this point, it was natural for Hezbollah to accuse Zionist groups and the United States of being behind the European decision against it, just like it did when the indictment was issued against four of its leaders and members for their involvement in the assassination of Rafik Hariri.

Days before the EU decision was announced, a prominent Beirut deputy had not ruled out the possibility that Hezbollah — whose conditions are impeding the process of forming a government led by Prime Minister-designate Tammam Salam, according to the Future Movement and its allies — will accept a government in which it and the rest of the political forces do not directly participate. Such a government would not allocate ministries to specific sects. For example, the Ministry of Foreign Affairs and Immigration would no longer be headed by a Shiite party, which would be accused by other parties of serving only Hezbollah at the expense of Lebanon's official objectivity in the event of a conflict of interests.

This would be a government in which the March 8 coalition would not be able to block decisions dispreferred by Hezbollah. It would also be a government that excludes from its ministerial declaration Hezbollah’s weapons and the resistance, a change from the slogan “the people, the army and the resistance,” which was passed on by the previous governments. This is due to Hezbollah’s need for an actual government to provide it with a protective shield against the attacks by the international and Arab communities.

Following Hezbollah Secretary-General Hassan Nasrallah’s live televised speech on July 24 — in which he rejected the international decision and made his sarcastic proposal to appoint officials from Hezbollah’s military wing as ministers in the new government — everyone, with the prime minister-designate at the forefront, realized that the Lebanese political situation does not look good. Therefore, the caretaker government headed by outgoing Prime Minister Najib Mikati will continue managing the country’s affairs until a change favoring one party occurs and pushes it to change its position. Hezbollah will either bend its conditions or its opponents will have to accept the ones it has set, and in return waive their own. These include Hezbollah not directly participating in the government, not controlling a blocking third and not retaining the ministries that it wants, most importantly the Ministry of Foreign Affairs.

As for Nasrallah’s call to hold a national dialogue, the answer came quickly. The dialogue is approved but with the condition that it must be held after and not before the formation of the government, so that this dialogue does not turn into a constituent assembly. In fact, the party answering his call has its suspicions that Hezbollah and its allies — each having a specific interest in mind — are now seeking to drop the Taif Agreement, which ended Lebanon's long war in 1990. They suspect Hezbollah may want to do away with this agreement in order to redistribute the balance of power in such a way that is more in line with Hezbollah’s weight in the country.

There were other conditions, including Hezbollah immediately withdrawing its military units from Syria and handing over its members accused of assassinating Hariri to the Special Tribunal for Lebanon.

Some politicians from outside the narrow decision-making circles added yet another condition: that Hezbollah hands over its weapons to the Lebanese army. Of course, this is an unjustified surrender according to Hezbollah, whose vision over Lebanon and its complexities is much broader than this country.