Events in Egypt are now being interpreted in the Israeli news media, and on social media, by Hebrew-speaking Egyptians who are shattering the image of the Arab world in Israel. 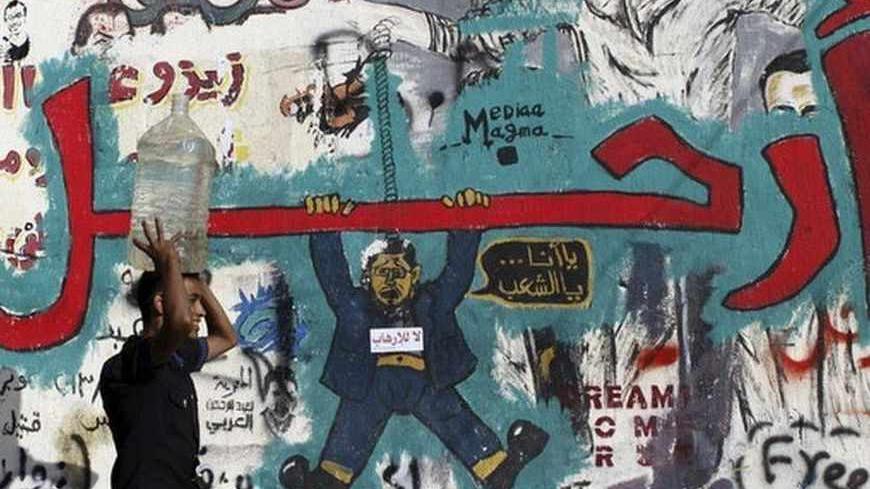 A man carrying a water container on his head walks in front of a wall filled with graffiti depicting deposed Egyptian president Mohammed Morsi with a message reading "Leave," at Tahrir Square in Cairo, July 14, 2013. - REUTERS/Amr Abdallah Dalsh

Until a few weeks ago, the name Heba Hamdi Abu Sief meant nothing to most Israelis. But then dramatic events erupted in Cairo, culminating in the dismissal of Egyptian President Mohammed Morsi. Now the name of the veiled Egyptian academic has become familiar to us all. Together with her friend, seasoned researcher and tour guide Munir Mahmoud, Abu Sief has become one of the main Hebrew-speaking spokespersons of the anti-Morsi protest movement.

From the heart of the hottest square in the Arab world, Abu Sief told the Israelis in their language what impelled the masses to demand Morsi’s removal. She passionately explained that by assenting to the nation’s demands to oust Morsi, the army actually carried out a supremely democratic act. When she felt the need, Abu Sief did not hesitate in expressing her admonitions as well.

“Israeli commentators do not live in Egypt,” she said. “Their worldview is limited to their own interests, personal or national.”

Abu Sief made her debut in the Israeli media four months ago on the Israeli army's radio station. On the eve of Morsi’s dismissal, she was again interviewed on the same station. This was her short cut to regular appearances on other Israeli media outlets. Following Abu Sief and Munir Mahmoud, additional Hebrew-speaking Egyptians made their way to Israeli broadcast networks. These include translator Omar Zakaria, journalist Mohammed Magdi, television personality Fatma Helali and marketing representative Yasser Mohammed Marzouk, who became known under his Facebook alias, “the speedy typist from Cairo.”

This kind of cooperation between private Egyptian citizens and the Israeli media could not have happened so easily a year or two ago, and certainly not in former Egyptian president Hosni Mubarak’s era. It is the direct result of the dramatic events overtaking Cairo these days.

“It was excellent. I received total freedom to say what I wanted to say, it’s only a shame that it didn’t happen under happier circumstances,” concludes Omar Zakaria, telling Al-Monitor about his motivation to speak to the Israelis. “I wanted the Israeli public to get to know the overall picture from a first-hand source. I think that this can bring the peoples closer together.” Meanwhile, "speedy typist" Yasser Mohammed wrote on his Facebook page, “I conquered Israel without weapons when I opened my mouth and my heart.”

This commitment by Egyptians to speak to Israelis in their language has created excitement in Israel too. Director Doron Tsabari tweeted, “Every second that Heba Abu Sief talks about the Egyptian revolution on the Israeli screen, Israeli stigmas about Arabs are smashed. Continue, Heba.”

In an article published in the Israeli daily Haaretz, journalist Yossi Klein pokes fun at Israeli astonishment at the polished Hebrew of their neighbors. Klein posits that the average Israeli is uncomfortable hearing his neighbors speak Hebrew because he is accustomed to the image of the "other," the unsophisticated Arab. Our poor familiarity with our neighbors, presumes Klein, is the reason that we feel surprised.

Ostensibly, Egyptian citizens could have made contact with the Israeli media (if they wanted to) from the first day of the peace agreement between the countries in 1979. Hebrew has been taught in Egypt since 1933. Retired ambassador Zvi Gabay, who served in the Cairo embassy in the early 1980s, talks about how he was amazed at the knowledge of the lecturers and students in the Hebrew department of Ain Shams University when he visited.

“Ahmed al-Misri, deputy director of the Israel department in the Egyptian Foreign Ministry, asked and received from me works of Yehuda Amichai that he needed for writing his doctorate,” Gabay recalls. “In one of the meetings with Hebrew speakers, I was asked to explain the words ‘Admor’ (grand rabbi) and 'Arabush’ (Israeli slang for Arab).”

Gabay, who later on served as deputy director general at the Foreign Ministry, was lucky. He was part of that small coterie of Israelis bearing official titles that circumstances ''allowed'' Egyptians to come in contact with. For dozens of years, the relationship was limited to a small clique of mainly officers and diplomats. The peace treaty between the countries was formulated as a military-diplomatic alliance. Each side had its own excuse, related to politics or security, for a sour attitude toward the other.

The practical expression of this policy in Egypt raised difficulties for all citizens who wanted to visit Israel or be in touch with its citizens. Trade unions persecuted members who dared talk to Israelis, and the state’s apparatuses were sent to stop any private initiative for contact in its infancy. Every Egyptian journalist, politician, academic, businessman or tourist knew that he had to obtain special authorization from the Interior Ministry in Cairo if he wanted to visit Israel. He had to explain the purpose of his visit and justify it, and on his return he’d most likely have to give a report of what he did there.

Many would give up at this point, even before getting to the next stage of going to the Israeli consulate for a visa. But even those who managed to pass all the hurdles usually faced disappointment on the Israeli side as well. The Israelis, filled with security fears, were in no rush to grant the prized entrance permit. And beyond the security problem, the official Israeli establishment has never encouraged its public to look for the positive aspects of its neighbors. Thus, both nations suffered damage for generations. This was intentional harm that stole from them the right to benefit from normative neighborly relations.

It is quite possible that a constructive dialogue, the like of which never took place between Israelis and Egyptians, might have even contributed to advancing a solution on the Palestinian issue.

Clearly, the group of Hebrew-speaking Egyptians deserve citations or medals for bravery. By saying “no” to dozens of years of an iron regime that prevented them from conversing with Israelis, they have created a small revolution with their own mouths. Their positive response to appeals from the Israeli media to explain the situation in Egypt is not treason, but an effort to knock down walls. It is part of the struggle for freedom of expression and the natural right to talk with one’s neighbor, for better or worse.

These youths are not alone in the battlefield. There are those in Cairo who are giving them a tail wind. One of them is Samy al-Emam, a Hebrew-language researcher in Al Azhar University.

“I thank my honorable brother Munir, and my dear children Heba Hamdi and Mohammed Magdi for their efforts to show (the Israelis) Egypt’s proud youths,” wrote Emam on Facebook. “All my thanks to you — with God’s blessings may you continue, may you succeed with his help.”

In Emam’s eyes, those Egyptians are not traitors, but patriots carrying the voices of Egypt far and wide. Why did they learn Hebrew, he wonders, if they couldn’t actually use it?

Does this mean that we will soon see Israelis talking to the Egyptians on their media outlets? It is too soon to hope for this. In order for such a thing to happen, the Egyptians need to find — among themselves — a reasonable political explanation that will justify it. Although the time is not yet ripe, at the rapid pace with which the walls are falling around us, it is altogether likely that good tidings in this field await us in the coming years.

Jacky Hugi is the Arab affairs analyst of the Israeli army radio Galie-Zahal, a columnist for the Israeli business newspaper Globes and the former Arab Affairs correspondent for Israel`s Maariv daily. He is the author of Arabian Nights.Com (published February 2011), a nonfiction introduction for Israeli readers to contemporary social, cultural and political discourse within the Arab World and the winner of both the 2007 Media award of The London Next Century Foundation and the 2008 B'nai B'rith award for journalism of Jewish communities in the Arab World, among others. On Twitter: @JackyHugi