The port city of Haifa, once a major gateway to the Near East, is regaining some of its lost commercial importance thanks to the Syrian war. 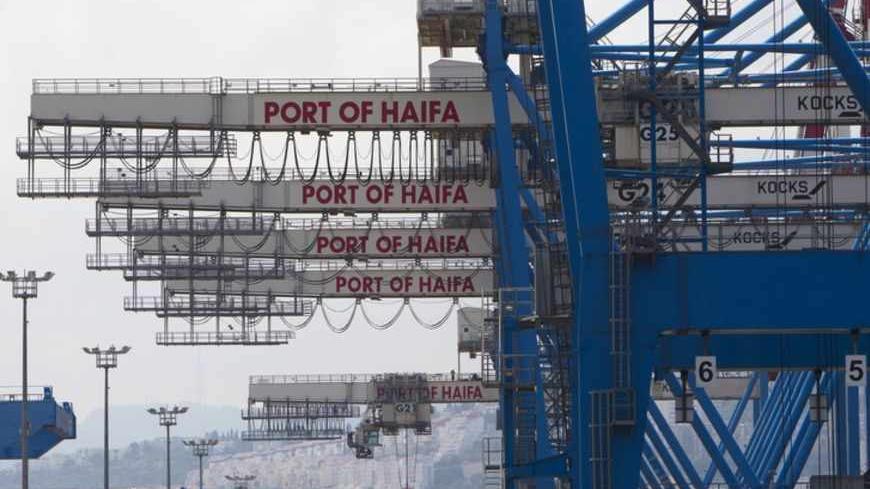 HAIFA, Israel — Under Ottoman and British rule, the port city of Haifa, nestled between the Mediterranean Sea and Mount Carmel, was a major gateway to the Near East, a multiethnic entrepôt where merchants met and goods flowed to and from Damascus, Baghdad and beyond. The creation of Israel in 1948 and the consequent conflict with the Arab world, however, severed Haifa from much of its economic hinterland. Today another war is helping it regain some of its lost commercial importance and perhaps in the process changing the geopolitical calculus of the region.

On May 27, a convoy of 30 trucks carrying fresh fruits and vegetables from the Turkish city of Iskenderun rolled off the 7,084-ton Kibris Yildiz anchored in Haifa and formed a line on one of the docks. The Turkish drivers lazed about in the sun for hours, chatting, smoking and occasionally facing Mecca to pray while waiting for the signal to move. When word finally came, the men jumped in their 12-wheelers and drove, in groups of 10, some 50 miles through the fertile Jezreel Valley to the border with Jordan, their final destination. The convoys were part of a new trade route that opened seven months ago to circumvent the war in nearby Syria.

“There's no other alternative right now,” said a representative for Tiran, the Israeli shipping company operating the line. Speaking on condition of anonymity due to political sensitivities, he added, “If [traders] need to move fast, and they have raw materials, and they don't want the cargo handled again, this is the only option.”

Until recently, goods traveled overland between Turkey, to the north, and Jordan, Saudi Arabia and the Persian Gulf, to the south, but the fighting in Syria and instability in Iraq have severed these lines. As the Washington Post reported on May 24, a roundabout route through Egypt and the Suez Canal has picked up most of the traffic, but it can take about three weeks for containers to arrive at their port of call, making it undesirable for transporting perishable or delicate products.

Tiran's service is faster — goods travel between Turkey and Jordan via Haifa in just three days — if not much cheaper. Transport by truck is costlier than by container. The line's relative speed, however, makes it ideal for transporting meat, fruit and vegetables, which, according to Israeli government sources, are largely consumed by Jordanians but are also helping sustain hundreds of thousands of Syrians who have taken refuge in the country.

Other cargo traveling along the route includes textiles, liquid oxygen for medical purposes and even race cars. Last month a shipment of more than 300 such vehicles passed through Haifa en route to the annual Allgau Orient Rally, a charity event race from Germany to Jordan that formerly went through Syria. It is an open secret that Jordan is not the final destination of some of the goods, which continue on to Saudi Arabia and Iraq, neither of which has diplomatic relations with Israel.

Israeli security closely monitors the foreign trucks transiting its borders. Before entering the country, vehicles are put through giant x-ray machines, allowing customs officials to examine their contents without opening their doors. In addition, the drivers are screened by Shin Bet, the domestic intelligence service. Whatever security headaches the line might cause, it has not lessened Jerusalem's enthusiasm for it. The Israeli government has high hopes the revival of the Haifa route might help improve ties with its Arab neighbors.

“How do you increase regional cooperation? You start with economic cooperation,” said an Israeli official at the Ministry of Regional Development who insisted on anonymity. “This is a win-win situation. People can meet, and Jordanians can see that Israelis don't have horns, and Turks will see that not every Israeli is murdering people on the [Mavi] Marmara,” he said, referring to the boat en route to Gaza that Israel raided in 2009, leaving nine Turkish activists dead. “They'll meet and drink coffee together, help each other and build a better life.”

Jordan is less keen of advertising the new line than Israel. Although the two signed a peace treaty in 1994, the Hashemite kingdom's large Palestinian population remains hostile toward the Jewish state. With the spate of uprisings in the region, Jordan's King Abdullah II is wary of upsetting his citizens by flaunting economic cooperation with their adversary. Aware of Jordanian sensitivities, none of the Israeli officials interviewed for this article would speak on the record.

Israel's ties with Turkey have also been troubled, sometimes causing complications for business transactions. For instance, the race cars that took part in the Allgau rally in May hit a bureaucratic snag on their return from Jordan and were detained in Haifa for five days. Turkish headlines screamed of Israeli foul play, and the Turkish ambassador was called in to resolve the problem.

“Even with all the difficulties and controversy, if it wasn't so profitable they wouldn't use the line,” said Haifa Port spokesperson Zohar Rom, referring to the Allgau incident. “After less than a week, the problem was solved, and a new company was found to run the line.”

The Haifa-Iskenderun route has tremendous commercial potential, but so far its success remains limited. In the nearly seven months since it opened, authorities estimate a total of 1,400 trucks have passed through Haifa — far from capacity. Nimrod Goren, a professor of Middle Eastern studies at the Hebrew University of Jerusalem, noted that business ties between nations can often be completely decoupled from diplomatic ones. As an example, he says trade between Israel and Turkey flourished even at the height of the spat between their governments in 2009. Yet in the long run, the flow of people and cargo between countries can sometimes yield slight yet significant changes in perception.

“There's so much regional cooperation between Israeli and Arab businessmen that people aren't aware of, yet somehow there's a prevailing sense that such cooperation is impossible,” said Goren. “But it exists, and when stories like this get out, they change some of that awareness.”

Ben Hartman is a reporter for the Jerusalem Post, based in Tel Aviv. His writing has also appeared in The Atlantic, CNN and The Forward. On Twitter: @Benhartman

Gil Shefler is a freelance journalist based in New York City. He writes about international affairs with a focus on the Middle East and religion. On Twitter: @gilshefler