A senior US aid official tasked with coordinating humanitarian assistance to Syria says he is “all for” prolonging the Syria war if it leads to a “democratic Syria.” 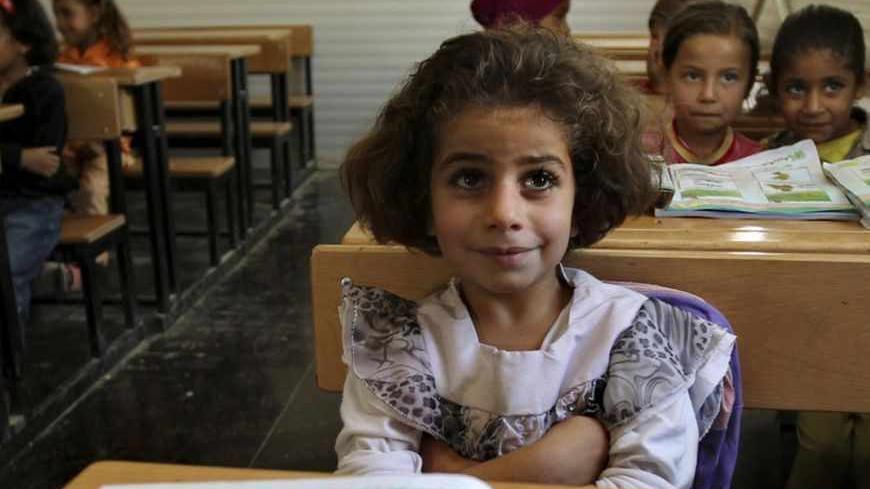 Syrian pupils sit for their lessons in a UNICEF school at the Zaatari refugee camp in the Jordanian city of Mafraq, near the border with Syria, June 25, 2013. - REUTERS/Muhammad Hamed

As the Syrian civil war grinds on and the Syrian opposition struggles to speak with a unified voice, a new institution has developed to help international donors deliver urgently needed humanitarian assistance to areas outside Syrian government control.

Mark Ward, a senior adviser to the State Department on aid to Syria, told Al-Monitor in an interview Thursday [June 27], that the so-called Assistance Coordination Unit (ACU), has become a crucial partner in assessing Syrian needs and determining where supplies such as food and medicine should go.

Created in November under the initial leadership of Suhair al-Atassi, a vice president of the National Coalition for Syrian Revolutionary and Opposition Forces — the opposition group with the greatest international recognition — the ACU has gone from a staff of two to 170 personnel, Ward said.

“What we have today is absolutely essential to the international community in terms of an organization that we can bounce ideas off of,” he said. “The donor countries now have someone to ground truth and validate their ideas.”

Initially, Ward said, big foreign NGOs were reluctant to share information with the ACU, whose staff was similarly wary of revealing contacts within Syria. Over the past half year, however, those mutual doubts have dissipated. “There’s no longer a trust problem,” Ward said. “As a result, our humanitarian program is far more effective today because we know what the priorities are and we have better contacts inside Syria.” The US is no longer responding to “the guy with the best cell phone but to the greatest need inside,” he added.

US humanitarian assistance to Syria since the war began more than two years ago exceeds $815 million and is focused on food and acute medical care. Ward said that flour and food baskets paid for by the United States are feeding more than 200,000 people a day in Aleppo. The US has also delivered via the ACU and internal NGOs portable surgical equipment, surgical drugs and kits to turn basements into sterile operating rooms.

“We’ve treated thousands of wounded rebel fighters, thousands of people in the community in the wrong place at the wrong time and even injured regime fighters,” Ward said.

US aid has gone primarily to seven provinces in the north of Syria near the Turkish border which are relatively calm and under opposition control, as well as to Syrians displaced within the country and refugee populations outside Syria. An international donors conference in Kuwait in January produced pledges of $1.6 billion in humanitarian assistance, although there remains a big deficit between what the United Nations has requested for aid for refugees and internally displaced Syrians  and what foreign donors have so far provided.

The ACU, which is headquartered in Turkey, has just opened an office in Jordan, Ward said, and may seek to help coordinate aid to the south of Syria as well as helping the Jordanian government deliver assistance to the hundreds of thousands of Syrian refugees living in camps and in Jordanian towns and cities.

The Barack Obama administration has also sent about $250 million in non-arms aid to Syrian rebel forces. In the aftermath of a revised US intelligence assessment on June 13 that the Syrian government used chemical weapons that killed about 150 people — and recent battlefield advances by Bashar al-Assad’s forces — the US has promised to begin providing military assistance to the rebels as well. Ward told Al-Monitor that the recent shipment of about 200,000 military rations — so-called meals ready to eat or MRE’s — was a test for the opposition Syrian Military Council (SMC) to see if the supplies made it to authorized groups — not jihadist organizations such as Jabhat al-Nusra, which is on the State Department’s terrorist list.

“Our view is that they passed the test,” Ward said of the SMC. “This was a very important first step to provide materials and equipment and other things that we would not want to fall into the wrong hands.”

The Obama administration has declined to identify exactly what “other things” it plans to send via the SMC but the items may include ammunition, small arms and anti-tank weapons. The United States is also providing training to rebel forces in Jordan.

The US decision to begin to arm the opposition is likely to prolong what is already the region’s bloodiest and most intractable conflict.

In a new report released Thursday, the International Crisis Group warned that the conflict, which has already killed 100,000 Syrians, is “metastasizing,” spreading into Lebanon and Iraq, is becoming “a regional war with a Syrian focus,” and that the best solution is a diplomatic one, as Al-Monitor has reported for months.

However, diplomatic efforts toward convening a Geneva conference on Syria appear to have stalled, despite the June 18 statement by the G-8 to hold the conference “as soon as possible.”  UN Joint Special Representative Lakhdar Brahimi said on June 25 that he doubted the conference would take place in July, as had originally been hoped. US Secretary of State John Kerry and Russian Foreign Minister Sergey Lavrov will meet next week to try to get the conference back on track.  A meeting of Syrian opposition forces will also take up their participation in the conference at a meeting July 4-5.

UN officials have called for a cease-fire to facilitate delivery of aid but a pause in hostilities looks unlikely.

Asked if US aid to the opposition was only prolonging the bloodshed, Ward said, “If prolonging the war increases the chances of a free and democratic Syria, we’re all for it.”

He also expressed optimism that the ACU would continue to exist after the war is over, becoming either an independent NGO or a future ministry of planning.