Robert Ford, US ambassador to Syria who left Damascus in February, said the Obama administration has not decided whether to provide arms to the Syrian opposition and that the US priority remains a political deal, reports Barbara Slavin from Washington. 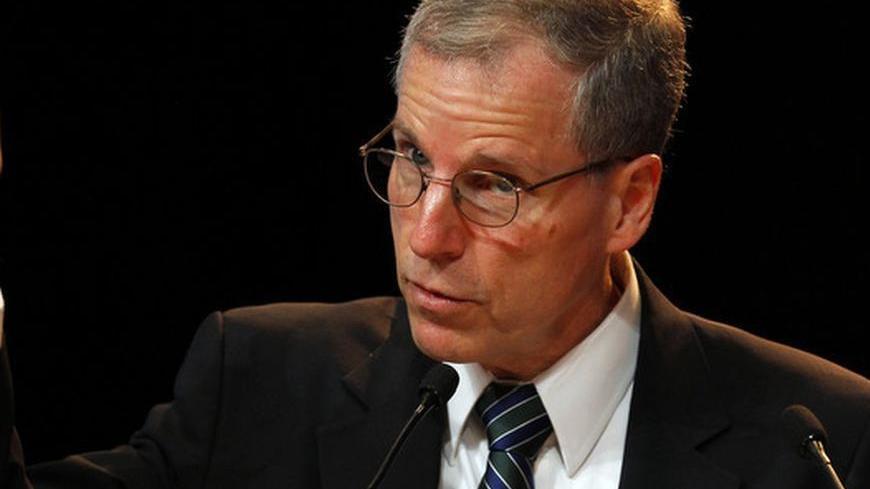 US Ambassador to Syria Robert Ford speaks after receiving a 2012 John F. Kennedy Profile in Courage award during ceremonies at the John F. Kennedy Library in Boston, Massachusetts May 7, 2012. - REUTERS/Brian Snyder

The Obama administration has not yet decided whether to provide arms to selected elements of the Syrian opposition and fears that introducing more weapons will only prolong the civil war with even worse consequences for Syrian civilians, a top US diplomat said Thursday, Nov. 29.

Robert Ford, the US ambassador to Syria who left Damascus in February when the fighting made it too dangerous for American diplomats to remain, discussed US strategy toward Syria in detail Thursday at a Washington forum ostensibly devoted to the Syrian humanitarian crisis and the US response.

Asked about published reports that the Obama administration is considering increasing its involvement in the military aspects of the Syrian conflict by sending weapons directly to rebel groups, Ford said “the president has never taken the provision of arms off the table” but that the US priority remains a political deal between the opposition and members of the government that “do not have blood on their hands.”

“Arms are a tactic, not a strategy,” Ford said. “We think that a military solution is not the best way for Syria. Efforts to win this by conquering one side or another will simply prolong the violence and aggravate an already terrible humanitarian situation.”

Later, he told reporters who followed him outside the hall that the key question is: “How do you convince one side that is losing to stop fighting when they think their existence is at stake?”

However, US military involvement appears to be escalating through growing NATO involvement and the upcoming installation of Patriot missiles in Turkey near the border with Syria.

Ford insisted, when queried by Al-Monitor, that the Patriots are meant only to protect Turks who live near the border from Syrian shelling, not to enforce a no-fly zone within Syria as rebels occupy more territory. “The mission is to support the defense of Turkey,” he said.

Still, Murhaf Jouejati, a professor at the National Defense University in Washington and a Syrian-American who is sympathetic to the Syrian opposition, told Al-Monitor that “the mere fact that NATO is on the ground in Turkey looking at sites [for the Patriots] suggests a more intense involvement by the US.”

Since the uprising began in March 2011 with peaceful protests, the conflict has become increasingly militarized, claiming the lives of an estimated 40,000 people. While the US insists it is not providing arms to the rebels, Qatar and Saudi Arabia have been doing so, and Iran and Russia have armed the forces of Syrian President Bashar al-Assad. The rebels are also capturing increasing amounts of government weaponry.

Ford said Syrian government forces are getting weaker but are not so weak that they were about to stop fighting anytime soon.

Recently, shoulder-fired missiles have appeared among the rebels, who are using them to target Syrian helicopters and jets that have been firing on the Syrian population. The introduction of these so-called Manpads “will certainly complicate the Syrian military’s calculations in terms of how to carry on the fight,” Ford said, but will not “lead the people fighting for Bashar al-Assad to stop fighting” for him. Such missiles made life more difficult for Soviet forces in Afghanistan, but did not resolve the conflict there, he said. Libyans have also learned, he added, that “the proliferation of weapons by themselves is not a strategy.”

The US has provided nearly $200 million in nonlethal assistance, the most of any nation, Ford said, for humanitarian aid to Syrians — both the more than one million people displaced within the country and an estimated 450,000 refugees in neighboring states. Ford and others who spoke Thursday complained about Syrian obstruction to delivering relief to those within Syria. Ford also said that some of the aid has gone for communications equipment to help Syrians get information out about the fighting.

“A lot of the pictures you see on the nightly news are from communications equipment that we supplied,” he said, including equipment Syrians can use to overcome government restrictions on the Internet. There were new reports Thursday that the Syrian regime had shut down Internet and phone access.

The Obama administration has also devoted considerable energy to prodding Syrian opposition groups to coalesce into a functioning political organization to replace the feckless Syrian National Council. While doubts remain about the new group’s viability and cohesiveness, Britain, France, Spain, Turkey and the Arab nations of the Gulf Cooperation Council have formally recognized the group, known as the Syrian National Coalition for Opposition and Revolutionary Forces.

Asked by Al-Monitor why the United States had not explicitly recognized the coalition, Ford suggested that the group still had work to do but did not specify what further steps were required. However, the Associated Press, quoting unidentified US officials, said Thursday that recognition is coming soon.

State Department spokeswoman Victoria Nuland added later on Thursday that the US also wants the new council to “establish a leadership structure that’s clear to everybody, but also discrete committees that can deal with the various issues that they are assuming responsibility for …  a humanitarian group, a group that will interface on the security side, a group that’ll look at the current and future political structure, a judicial group, accountability group."

Jouejati said the US government wants the coalition to show “that they are in control of the ground in Syria” by intensifying contacts with rebel forces, both political and military, before formally recognizing the group.

Meanwhile, the growing presence of jihadist groups within the opposition is a major concern, said Ford. He said the Obama administration was working with other foreign supporters of the rebels to “identify who the worst groups are and how to isolate them.” The US “knows a lot more about the armed groups out there than we did a year ago,” he said.

Much of the discussion Thursday focused on how to alleviate the dire plight of Syrians caught up in the expanding conflict. Mark Bartolini, director of the office of Foreign Disaster Assistance at the US Agency for International Development, said $122 million of US aid has gone to Syrians within Syria. Some of the funds have provided medical assistance to 667,000 people, including training for over 500 medical professionals and medical supplies. Preparing the Syrians for a cold winter is also a major concern, he said.

Ford complained that “regime forces have blocked access […] to vitally needed humanitarian supplies.” He said the international community also needs to donate more funds and that this would be an “urgent” topic when a group known as the Friends of Syria meets in about two weeks.