Whether Qusair Will Tip The Balance Remains to Be Seen

The defeat of Syrian opposition forces in Qusair may be a turning point toward a deepening of the conflict or a catalyst for a peace conference. 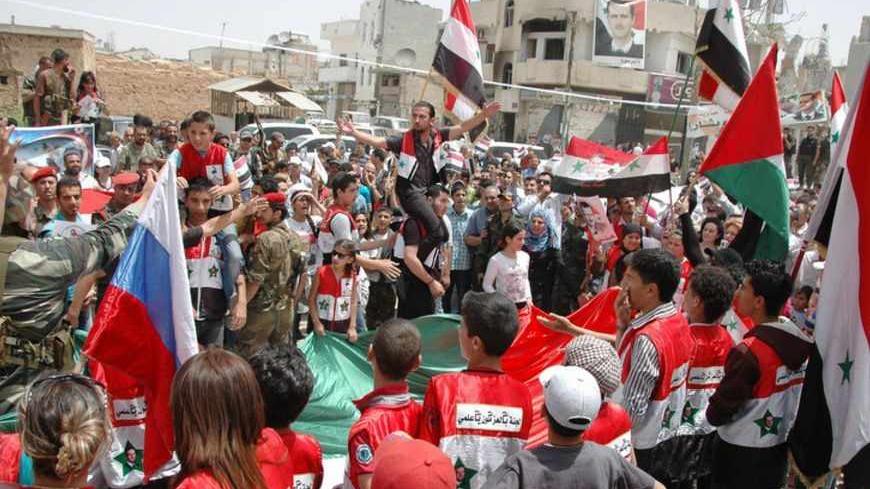 Lebanese and Syrian supporters of Syria's President Bashar al-Assad, celebrate in Qusair, June 9, 2013, after the Syrian army and Lebanese Hezbollah fighters took control of the city from rebel fighters, in this photograph released by Syria's national news agency, SANA. - REUTERS/SANA/Handout via Reuters

The political consequences of the fall of the city of Qusair into the hands of pro-Assad Syrian forces backed by the Hezbollah guerrillas in Lebanon may be as important as the military results — if not more so. These political consequences may have more impact in the coming period, particularly in the geographical area concerned with the political struggle raging both in and against Syria.

One could even say that the military and political results are the same. On the one hand, this battle has facilitated President Bashar al-Assad’s takeover of Homs and Aleppo, down to the border with Turkey. On the other, it has allowed Moscow to play a more decisive and important role in the negotiations about a possible settlement for the Syrian crisis.

Moreover, this battle secured a contiguity between Damascus and the Syrian coast, the two main areas of influence of the regime. It secured communication at the international level between the roles of Moscow and Tehran in the Syrian arena to reach the solution that best serves the interests of the two parties.

Militarily, the opposition’s defeat took place at the worst time. It coincided with disputes plaguing the different components of the opposition, keeping in mind that these disputes have started to get out into the open. It also coincided with the advent of Jabhat al-Nusra becoming a main party in the opposition. This has had a negative impact on the opposition, in terms of the prevailing mood in Syria, as well as regarding international — particularly Western — public opinion.

Likewise, politically speaking, the Qusair defeat came at a very bad time for the anti-Assad forces. Suffice it to review the situation of all the international forces that embraced the Syrian opposition throughout its war that has been ongoing for more than 27 months:

Qusair fell as the US administration was clearly isolating itself from the Syrian issue. US National Security Adviser-designate Susan Rice moving from New York to Washington may not be sufficient to change this isolation in the short term, or contribute to modifying the balance of power on the ground.

Qusair fell as Europe was busy talking about jihadist fighters of European nationalities fighting alongside the opposition in Syria more than about its support for this opposition in Syria. Even the French Interior Minister Manuel Valls talked two days ago about the risks of having these [militants] return to their European countries, implicitly indicating that Europe does not want them to return at all, whatever the form of this “non-return.”

Qusair fell as Turkish Prime Minister Recep Tayyip Erdogan was facing an internal opposition at different levels. Turkey’s opposition to the new neo-Ottoman sultan includes a secular-Islamist conflict. It contains a struggle between the historic political class concentrated in the cities of Istanbul, Ankara and Izmir, and the new class that is emerging with the "Justice and Development Party" from Anatolia. It contains an ethnic conflict between the Kurdish people and the Turkmen and Alevis. It also involves a conflict between those who oppose Turkey's involvement in Syria and those who have bet on this involvement as a key to the gate of the new Turkish Empire towards the Middle East. This should be a sufficient factor to change the Turkish options, whatever the settlement between Erdogan and his opponents. Add to this the changing Turkish priorities and the current concerns and preoccupations of the government in Ankara.

Qusair fell as Saudi Arabia was going through a clear stagnation at the level of its foreign policy. This may be the result of a number of reasons, including the soundness of the government itself, which, in turn, depends on the health of the octogenarian rulers, who are busy trying to accomplish a peaceful transition for the positions of power in the regime from the second generation of the sons of the founder of Saudi Arabia, King Abdulaziz, to the third generation.

Qusair fell as the Qatari role [in the conflict] was facing harsh criticism. Some Gulf states criticize it against the backdrop of the conflict between the Muslim Brotherhood, backed by Doha, and the other Salafist and Islamist movements backed by Riyadh and Abu Dhabi. There’s also an Arab public that criticizes this role in other countries such as Egypt. Add to this the criticism made against the financial roles of this small Gulf state by a number of Islamophobic European capitals, where the petrodollar controls ports and national interests. These roles give rise in Europe to a wave of prosecutions against politicians implicated in financial corruption related to those deals.

All of these factors formed the post-Qusair fall scene; a scene that, according to some, deepens the Syrian impasse. Others, however, believe it gives a glimmer of hope.

If expectations according to which the Syrian opposition would refuse to go to any negotiation as a result of the military and political balances resulting from the Qusair defeat proved to be true, then there will be a predicament. In other words, the Syrian opposition parties may abstain from completing any negotiations about the Geneva II Conference, and thus announce their bet on achieving a military victory in any other Syrian site in a bid to improve their position at the table of negotiations. Such a bet may take the opposition to a real impasse if another series of military defeats were to follow the one in Qusair. This is what the government expects in Damascus, and this is what it is working on achieving on the ground, from the Homs countryside and East Ghouta in Damascus, down to Aleppo.

In this case, the opposition waiting and seeking to compensate for its loss will turn into some sort of accumulation of losses, like a hard-luck poker player on the verge of bankruptcy.

The Qusair battle can, however, offer a glimmer of hope if the countries concerned in the Syrian war expand their quest to end the war. In other words, Qusair may lead to [the opposition] accepting Iran as a necessary partner in the Geneva II conference. All the issues may be subject to negotiations. Some might be openly put on the table, with others raised through secret, behind-the-scenes channels. Thus, there will be a channel for the Iranian nuclear issue, another for the new map of the areas under US-Russian influence, and a third channel probably for the map of the entire region. This might happen now that all the parties have come to realize that a century of the Sykes-Picot agreement in the Middle East has become sufficient to declare an end to the validity of this agreement and begin the search for a new agreement.

Will the Qusair battle deepen the impasse or will it offer a glimmer of hope? This is a dilemma that can only be solved in light of what Georges Clemenceau used to say, “War is too important to be left to the generals,” let alone to groups of insurgents!