The Forbidden Libraries Of the Qom Seminary

While confiscated and sensitive books are kept hidden from most religious students and scholars in Iran's religious city of Qom, copies have thrived online. 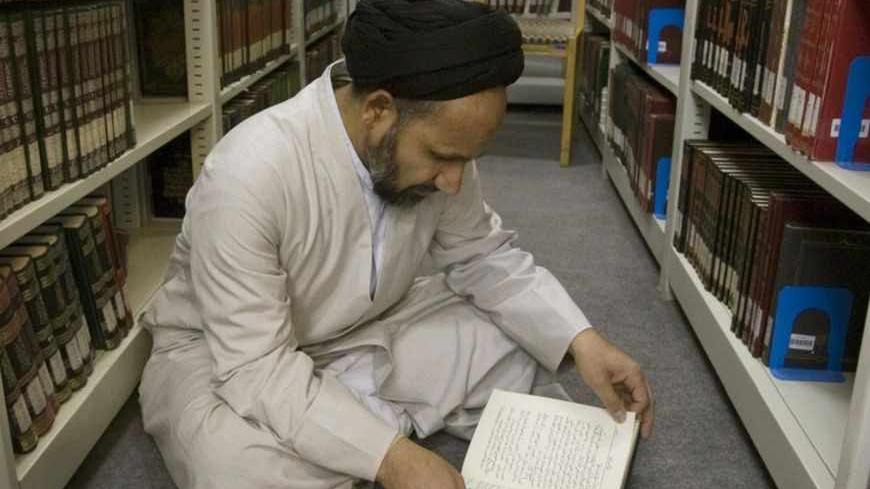 A cleric reads a book in the library of a religious research center associated with the seminary in Qom, 120 km (75 miles) south of Tehran Feb. 2, 2009. - REUTERS/Caren Firouz

In the past two decades, the extensive money allocated by religious institutions to their books and libraries section — alongside the foundation and expansion of educational centers — have turned the city of Qom into a rich source for books on religion, humanities and literature, not only in Iran but also in the region. Although the idea of hidden and banned books and libraries in the age of communication and expulsion of information is difficult to imagine, this phenomenon still has a substantial presence in the Hawza of Qom.

Almost all seminary libraries have a private section to which only very limited and controlled access is provided. In fact, the patrons are often not aware of the existence of these sections at all. These restrictions are on top of the normal strict restrictions that are in place, limiting the access of non-seminary students to these libraries. Additional restrictions are in place for female students who are allowed access to just some of the material, and then only during a limited window of time, and they are completely banned from gaining access to some of the libraries.

The most famous of these libraries is in the Imam Khomeini Institute, which is under the auspices of Ayatollah Mesbah-e Yazdi. This institution has two major libraries: the main library contains a large number of some of the most important works in the field of humanities and social sciences, mostly written in the three languages of Persian, English and Arabic. This collection exists as part of the project for “Islamization of Social Sciences.” The other section on the lower ground floor of the center is exclusive to a smaller number of institute’s scholars, and held in a separate section away from the library patrons, with shelves containing banned books. These are mostly the main literary works of Babism, Baha’ism and their predecessors such as Sheikhiyeh, and also included are some primary sources of other “heterodox religions,” as they are known in the Hawza.

These works, which include important manuscripts as well as lecture notes from the lectures of Mostafa Makkian, a former professor at the center who has now joined the ranks of the intellectual critics of the government, have been collected gradually. According to one of the organizers of the library, these have been acquired through the confiscation of the possessions of anti-revolutionary individuals, in the aftermath of the revolution. They were removed from the libraries of their owners and have been sent to the Mesbah-e Yazdi’s institute, where a decision will be made about them. The volumes were being kept in closed rooms until their sheer number and the uncertainty of the state of their management resulted in a decision to send them for recycling, resulting in their temporary storage at the center. However, the state of their storage and the lack of interest and attention to them resulted in even this decision being forgotten, thus keeping them in their current location.

Another library specializing in history contains parts of these forbidden volumes, mostly those related to the modern political history of Iran. These include documents regarding the notorious prison executions of the 1360s (1980s) in Iran, and can only be accessed by the head of the library Mr Rasoul Jafarian and a limited number of individuals who have his permission. Jafarian was appointed as the head of the Library of the Majles (Parliament) during the Ahmadinejad presidency.

Many students are complaining about the lack of proper access to some of the sources in the libraries of Darolhadith and the University of Religions in Qom. According to them, these sources are listed in the card index but do not exist in the actual locations. When the students approach the librarians, they are referred to the director of the center in order to gain permission to access the material. Among these, one can name articles by Ehsan Yarshater on Baha’ism; a book called The Twenty Three Years by Ali Dashti (a criticism of the history of Islam during the life of the prophet); Kasr Al-Sanam of Borgheyi, in criticism of the old sayings and beliefs of the Shiites; and also the works of Aramesh Doostar on criticism of religion, the Shia culture, and those commenting on some of the accusations faced by the Iranian government, such as the 1990s state assassinations of opposition members.

Making official arrangements for accessing these sources is quite difficult and is accompanied by meticulous questioning that usually discourages people. Many are then forced to use alternative sources that include mentions of the same issues, albeit from a viewpoint deemed acceptable by the official seminary establishment.

Jameat Almostafah is the department of the institute catering to non-Iranian seminary students. Its libraries are even more restricted, due the presence of a substantial number of new Muslims, or new Shia converts. At times, even the literary works of famous Shia scholars are kept secret, as views different than the official reading of the establishment make these sensitive. Examples include Al-akhbar Al-dakhilat by Mohammad-Taghi Shooshtary, which is a critique of the use of false hadith in Shiism. Another example is a book known as Naghz by Abdoljalil Qazvini Razi, which has a critical view of “Shia superstitions” and “the polemical attitudes toward influential Sunni characters.”

The problem of banned books is not unique to the libraries, as it extends to bookstores as well. A Jamat Almostafa student named Mohammad mentions his difficulty in gaining access to a book titled Reason and Religious Belief, saying that eventually he had to secretly buy a very expensive Xeroxed version of the text. He was surprised that this book was banned from being republished, since it is an important volume for post graduate and PhD studies and for him it was also a source of logical return to religion after a time of apostasy.

Besides extensive control over the publication process, the issue of confiscating some of the books after publication from bookstores and libraries in Qom and destroying them should be pointed out. Among the most important examples of these are a book by Salehi Najaf Abadi called Shahid –e Javid (the Immortal Martyr), which is a criticism of orthodox Shia beliefs regarding Ashoura, as well as some of the writings of Ahmad Ghabanchi against the official readings of Islam and Shiiism.

All these elements have resulted in a visible thriving of online libraries, which that contain most of these sources in lower quality and usually without copyrights. Also, the business of copying or scanning books has thrived in Qom. Occasionally, scholars are forced to travel outside of Iran in order to take part in book fairs and buy books, which again causes problems for them upon their return to Iran. A professor of religious studies in Qom says he was allowed to bring into the country some exegetical commentaries on the Bible — which he had obtained on a trip to Iraq — only after long negotiations at the border and proving that he was in fact a professor in the field of religious studies in the Seminary (Hawza) of Qom.