In the social context, while Israeli citizens struggle with economic cuts and the polarization of society, President Shimon Peres' 90th birthday celebrations seem out of line. 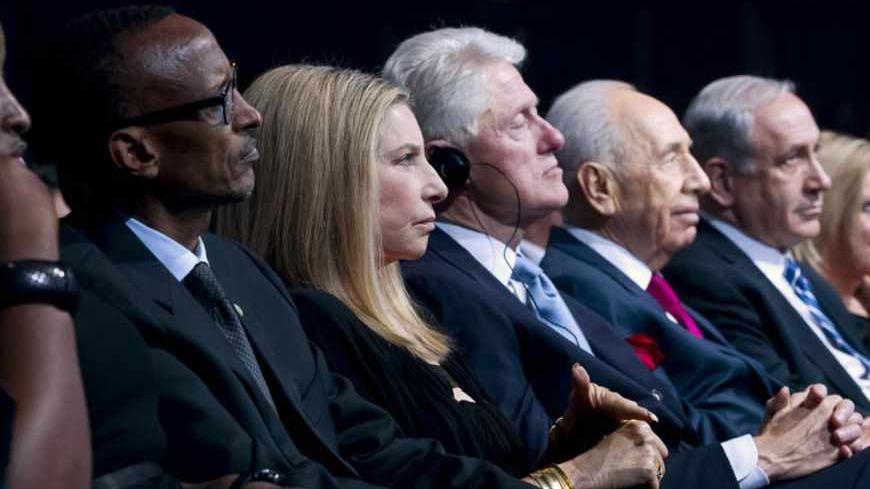 President Shimon Peres has come a long way from being a denigrated politician, an "inveterate schemer" as the late Prime Minister Yitzhak Rabin called him, and a "loser" as he was dubbed by his own partisan members — until emerging into a popular and beloved Israeli icon.

For more than a decade, Peres has been the poster boy of the “beautiful and sane Israel” around the world, mainly during times of ostracizing and boycott. Even the "die-hard Likudniks" [Likud party members], who in the 1980s threw tomatoes at him during his election campaign when visiting the markets, have made an about-face to become his staunch admirers.

We — the citizens of Israel — did not need this over-the-top spectacle that Peres organized for his nonagenarian birthday to know that he has reached this status.

It is hard to recall any other event that was so out of touch with reality of the Israeli experience as Peres' 90th birthday party. A year in the making, it was orchestrated by a well-oiled public relations and money machine. A lot of money.

Those who live here found it hard to dodge the saccharine pageant, which was aired simultaneously on Israel's four nationwide channels, and was a far cry from our daily reality here.

This is the reason why many Israelis found it hard to accept this phony charade on their TV screens. They didn't buy into the story of a pluralistic nation, where the beautiful female officer and the Arab child — handpicked to congratulate Peres on stage — represent populations who share the same equality and similar values; who are carefree and without conflicts. As if that same morning [June 18] the vandalizing of cars in the Arab village of Abu Gosh in a "price tag" attack had not taken place, and as if dozens of economic austerity measures have not been imposed on the people who are already unable to make ends meet.

So my thanks go to the Zuckerberg god who didn't leave me all alone in front of the TV with this uneasy feeling. Still, it's the 90th birthday of a president I value and like, so why not be happy?

All you needed to do is roam the social networks during the party at the Jerusalem International Convention Center in order to notice the negative buzz and public antagonism.

It started on a small scale, but kept gathering momentum by the minute as the party was getting longer, and as more and more content and smug faces of tycoons and local and international VIPs were flashing on the screen .

This was a party for the president of the state of Israel, only it was without his fellow Israelis. And please, spare me the stories about the cute kids who were dancing and congratulating Peres. Enough already with that navy officer who recited a ritual-like text about her love for the president. These were "pet citizens," necessary ornaments who were used carefully to glorify the president and his actions. The president forgot to invite his fellow citizens to the party.

Before being an international icon and good friends with former US President Bill Clinton, former British Prime Minister Tony Blair, singer Barbra Streisand and the Russian oligarch Roman Abramovich, Peres is first and foremost the president of (all) of Israel's citizens, hundreds of thousands of whom are struggling so it happens at this very moment with existential hardships. In a nutshell, let me just mention the Holocaust survivors who are dying daily of hunger and shame; the elderly who give up on medications and on heating their apartments in winter to buy a gift for their grandkids; the young people who cave under the yoke of buying a house and making a living. This is the reality of our life, which someone took the trouble of falsifying, and not inadvertently.

For those like me, who were looking for an outlet in the alternative party in the social networks — and there were many likeminded people — the most frequent words they came across was "exaggeration" and "out-of-touch," all dotted by expressive illustrations about the idolization of figures from both recent and more distant history. Some were reminded of the last days of Pompeii or the Titanic. Someone else used the term "The ship of fools." Another recalled Douglas Adams' science fiction book The Restaurant at the End of the Universe. The leitmotif in all those associations was the striking dissonance from reality, which, not before long, will be revealed in all its destructiveness.

The president's associates and close entourage — all public relations wizards — who know how to haul Clinton to Israel for half a million dollars and who tell us until we're blue in the face that Peres didn't really want such a big party and that he didn't know what was being planned — they will soon find out that they've ruined Peres' birthday which will ultimately go down in memory as a tasteless megalomaniac spectacle. Because there's simply no other way. In a country whose citizens two years ago took to the streets in droves to protest the cost of living, and who haven't stopped fighting for their rights since, you cannot remain indifferent to such an out-of-touch event.

Even the learned explanations provided by Peres' associates and public relations people, who tell us from every stage that we need to thank Peres for bringing the international pageant of celebrities at a time when nobody wants to hear about us — cannot change the picture. They only sharpen the feeling of disconnection and total obliviousness.

I heard some of them tell us that it is only thanks to Peres that the nations of the world don't ignore us, and that Peres is a one-man public diplomacy operation, and that the whole cost of the event, 11 million shekels [around $3 million], was raised by them through donations.

That's true. Peres is a beloved statesman the world over, rendering excellent public relation services for Israel. But Peres is not a president who carries a country around his neck, as my colleague Ben Caspit giftedly wrote here.

I personally felt much greater national pride a week ago [mid-June] when it was announced that Waze [a mobile driving application] was being sold to Google, much more than seeing Tony Blair tell me that Peres is my king.

And that's a shame. Because it could have been entirely different. Nobody expected Peres not to celebrate such a momentous event or alternatively to hold a small cozy party at his residence. What was missing was a modicum of modesty in a charged and turbulent economic-social period. What was lacking was a certain degree of connection and collaboration with the people. Peres would have come on top had he held a slightly more modest event and used some of the donations to help Holocaust survivors end their life with dignity.