Israel's Liberman: 'No Chance' For Deal With Palestinians 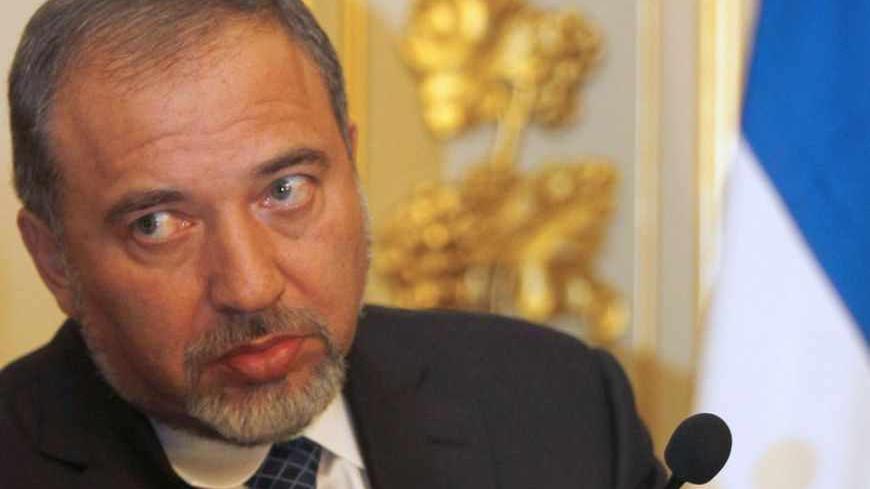 Israel's then-Foreign Affairs Minister Avigdor Liberman listens to a translator during a news conference with his Portuguese counterpart, Luis Amado, after their meeting in Lisbon, Jan. 25, 2011. - REUTERS/Jose Manuel Ribeiro

“There’s no chance of reaching a diplomatic arrangement with the Palestinians at this time,” said the chairman of the Knesset’s Foreign Affairs and Defense Committee, former Foreign Minister Avigdor Liberman in an interview with Al-Monitor. The interview with Liberman took place in his Knesset office, the current headquarters of the former foreign minister. (Liberman announced his resignation as foreign minister in December 2012, following the decision to indict him in connection with the affair of ''the ambassador to Belarus.'' The verdict is expected in the coming months and, meanwhile, the portfolio is being held in keeping for him by the prime minister.)

Outside the door, a storm was stirring, one of the many supplied daily by one of the weirdest coalitions we have ever known. It revolved around the chairman of the HaBayit HaYehudi Party, Economy and Trade Minister Naftali Bennett, who defined the two-state idea as “futile and detached from reality,” and once again exposed the deep ideological divides within the government on this issue.

Liberman does not declare that the two-state idea has come to an end, but he nonetheless makes clear there’s no chance of it happening and says it’s best to let it go.

Is the attack on Bennett justified? Didn’t he say the same things before the elections, as well?

“It’s rhetoric. … We’re at the epicenter of an earthquake and people come and tell us, ‘Let’s lay down the foundations for a new house.’ … We have to be prepared and ready for any development, but right now it’s not possible to formulate long-term policy.”

What does that mean? Has the idea of two states expired?

“Right now, in terms of timing, … if you keep spreading around hopes and expectations all the time and they cannot be realized, it only ends up causing disappointment and frustration. From a diplomatic point of view, uncertainty is the most difficult period. Right now there’s no chance of reaching a diplomatic arrangement with the Palestinians. Palestinian Chairman Abu Mazen at least had a patron, former Egyptian President Hosni Mubarak. Today, nothing is clear. The Arab League is non-existent, except for the paid employees there. They are unable to bring peace, neither to Syria nor to Libya.”

So Secretary of State John Kerry is wasting his time?

“There’s no one on whom the Americans can rely. Abu Mazen doesn’t enjoy any legitimacy. No elections have been held in the Palestinian Authority for three years and they do not appear to be in the offing. There are two separate entities: Hamas in Gaza and Fatah in Judea and Samaria. So with the Palestinians, we now need to focus on two areas: cooperation on issues of security, to the extent possible, and economic cooperation. Talk of a diplomatic breakthrough is not relevant now.”

I was in Ramallah last week [mid-June] with other Israeli journalists for a meeting with Palestinian cabinet ministers. They made clear that they’re willing to start negotiations on a permanent agreement based on the 1967 borders right now, provided construction in the settlements is frozen and Palestinian prisoners are released. Why not start talking?

“Why should we free prisoners? Who says that for the pleasure of ‘talking to them’ we have to release prisoners? We’re talking about heavy-duty prisoners and there’s no reason to let them go. A court found them guilty, not some political party or other. Most of them end up going back to terrorism, anyway. Therefore, I don’t think they want an arrangement and they only keep looking for new excuses. Why based on 1967? Why determine the outcome of the negotiations in advance?''

And there’s no significance, in your view, to the fact that there has been no violent struggle between us and the Palestinian Authority in recent years?

“It’s in their interest more than it is in ours. It’s clear that they will lose everything in case of a violent struggle … they will be thrown out of power. They’re not doing it for Israel, but for themselves.”

According to Liberman, the Middle East is still undergoing a process of change, and the stabilization process will be lengthy. “The states in the region are originally not real countries that existed as such and with a common history. Borders were determined very artificially after the First World War — many people, languages and ethnic groups in one state and it doesn’t really jell.”

What does that mean for us?

“We could find ourselves in a split second at the center of an unexpected conflagration. For example, if [Syrian President Bashar] Assad decides to transfer chemical weapons to Hezbollah — we cannot ignore such a scenario even if we wanted. In the meantime, he has climbed on the tallest tree in terms of rhetoric. The problem is that everyone has their fingers in the pie in this region. Iran, Turkey, Saudi Arabia, Qatar and also international powers. The tension between Russia and the United States. Everyone is stirring the pot. That’s why we have to be prepared for every possible eventuality, what’s happening in Sinai, too, all the attempts to attack southern Israel from there.”

Liberman has a proven ability to downplay situations or comments he doesn’t like. This happens when I mention the increasing warnings by senior elements in the center-left, that absent a two-state solution, “the Zionist project is in danger.”

“They’ve been saying that for years,” Liberman says quickly, adding, “I view Israel as a miraculous phenomenon. The ballet troupe of Boris Eifman is scheduled to come here from Russia in the middle of July — the best ballet in the world [with the ballet “Rodin” — M.M.]. I tried to get tickets. An average ticket costs NIS 300 ($83). They’re holding six performances. I called yesterday. There are no tickets left. Sold out. It’s amazing. Barbra Streisand comes here, tickets cost as much as NIS 1,200 ($333).

You go to an exhibit at the Israel Museum in Jerusalem and its jam-packed. A friend of mine came here and I tried to book him a room at a new hotel that just opened in Tel Aviv. I called, there are no rooms.” And this is where Liberman gets to the point: “Israel is a prosperous country.”

But there are some people who have no food.

“I don’t know. … It’s in the Jewish genes — to whine and complain. There are quite a few economic problems, but I don’t know of any country that doesn’t have them. You cannot ignore the Israeli success — they sold Waze (the Israeli navigation application sold to Google) and Eden Water (a mineral water plant) for billions of shekels. We’re nonetheless in a different place. The state of Israel is the only successful state in the Middle East. We are the only island of stability, democracy and openness.”

And how long will the government survive? You predicted at the time that the second Netanyahu government would see out its days …

This time, Liberman is unwilling to predict. “It’s too soon to say. The government will survive through the end of July, for sure. After that, the Knesset is out for the summer and it cannot topple the government; after that, there are municipal elections, and only after that we will know. This is not a traditional coalition. It takes time until all the components start working together in a synchronized fashion.”