With banking system reform in the offing, the lobbying contract of former President Shimon Peres with Bank Hapoalim delivered a serious blow to his image. 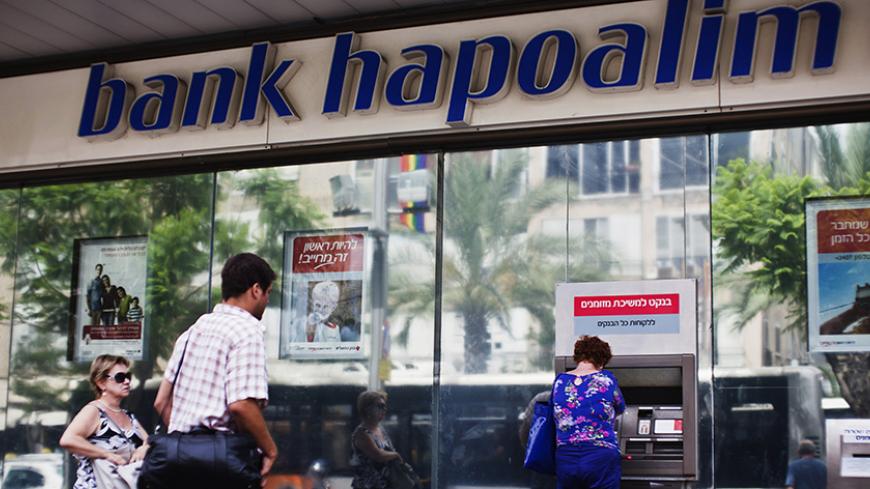 A woman uses an ATM outside a Bank Hapoalim branch in Tel Aviv, May 30, 2013. - REUTERS/Nir Elias

The decision by former President Shimon Peres to cancel his business agreement with Bank Hapoalim is too little, too late.

The affair began April 19 when journalist Sharon Shpurer of the economic daily TheMarker disclosed that Peres, 92, would receive a monthly retainer of $30,000 from the bank in exchange for promoting the bank’s affairs. In other words, Peres, of course, has an extensive contact network from his 70 years in public affairs. As part of this agreement, he was supposed to participate in the bank’s glitzy celebration April 28 in New York on the 40th anniversary of the bank’s activities in the United States

If Peres’ deal with the bank had not been disclosed, he probably would have flown with his assistants to New York. But as part of damage-control tactics, the trip was canceled. Initially, Peres’ closest aides argued that he is a private citizen and that the agreement had been made through Peres and Associates Co., which he founded with his son Chemi Peres. According to Peres’ associates, this company provides services to international companies abroad and the lion’s share of the money goes to philanthropy.

Immediately after Peres’ deal with the bank became public, the former president came under harsh criticism from both the right and left; social justice organizations called on Peres to annul the agreement. Knesset member Zehava Gal-On, the Meretz Party chairwoman, called him “a money-power lobbyist,” who will help the bank fight reforms. Knesset member Shelly Yachimovich of the Zionist Camp tweeted, “I knew that Peres loves honor, it turns out that he also loves money.”

The criticism leveled against the former president did not cause him to immediately cancel his agreement with the bank, nor did it persuade his son and business partner to understand that even if the deal is technically legal, it smells to high heaven. In the coming months, Finance Minister-designate Moshe Kahlon, the Kulanu Party head, intends to reform the banking system. At that, someone such as Peres cannot allow himself to assist a bank.

Peres and his associates, including those who made a living through him as consultants and advisers in the President’s Office and in the government (and including those who still work for him), proved yet again how disconnected they are from the “beating heart of the nation” — their favorite expression.

In an interview with Channel 2, Peres explained his decision while using the body language of an offended party. “I [would not have been] taking a penny from this money; it all goes to investment in science, in social needs. All the money would be donated to charities or social justice projects. I wouldn’t do anything that smelled of money. I’m not a lobbyist. I don’t have a bank, I have a good name. My good name is my only bank.”

But these are empty catchphrases of people who have long since lost touch with the heartbeat of the people.

Peres’ people, and Peres himself, feign innocence when they talk about “legitimate business activity.” If, indeed, everything is really above board, why didn’t they disclose the retainer deal themselves or through the bank’s public relations office? After all, the bank could have publicly boasted about their new presenter, as is customary when it comes to celebs. The answer to this is simple and infuriating: They didn’t do this because they knew that the public would find the deal to be in bad taste.

Peres was supposed to promote the bank’s interests in glitzy events or other ways without full disclosure and without minimal transparency. This is perhaps the most serious problem.

The explanations of philanthropy are also disconcerting. The public is unaware of any philanthropic projects funded by Peres' company; if such projects exist, why weren’t they exhibited in the last few days? In our current post-social justice protest era, it behooves Peres to behave with transparency and tell the public about the scope of the company’s business activities, how many workers it employs, what are the approximate wages and what social projects benefit from the company’s money.

Paradoxically, this proves again that he doesn’t really care about the Israeli public and that he is detached from the Israeli reality and from the public’s trials and tribulations. Only two years ago, Peres celebrated his 90th birthday in an ostentatious party. This was a megalomaniac festivity that, it seems, was designed to upgrade the Peres brand-name. The party was a combination of money and connections; it cost 11 million shekels (about $2.8 million) and was financed by contributions. Distinguished guests were flown in from all over the world, including Bill Clinton and Barbra Streisand.

This event also involved a problematic deal: At the time it emerged that Clinton was brought to Israel at the cost of about $500,000 as a guest lecturer to the Peres Academic Center, funded by the Jewish National Fund — meaning, the Israeli public paid for the lecture.

At the time, criticism of a Peres “personality cult” was rejected by his associates who took offense at what they saw as envy of the president. They did not understand that if they really wanted to connect Peres to the people, they could donate the 11 million shekels to Holocaust survivors or other social projects. But the reality is that Peres is evidently surrounded by a clique of people who understand that the Peres brand-name is worth lots of money.

That’s why they organized a birthday party to upgrade him on the eve of his retirement, and that’s why they continue to put him to shame with business initiatives that leave a very bad taste for a man who has done great things in these parts.