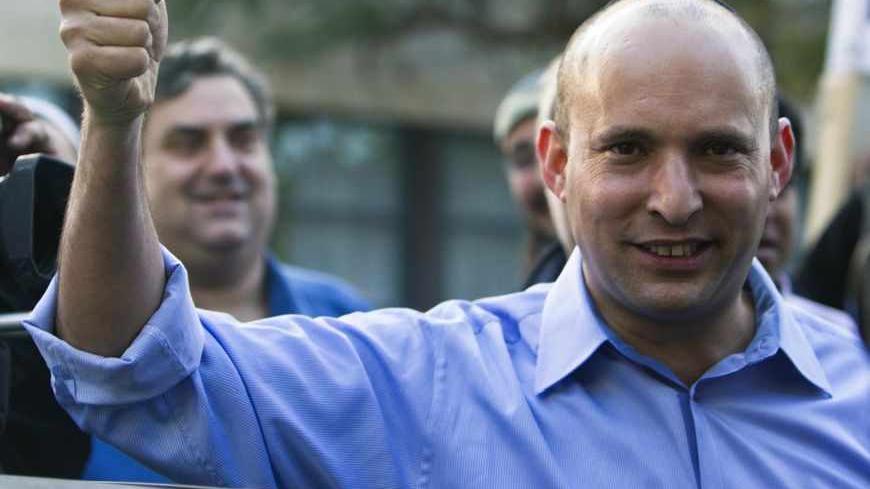 Naftali Bennett, leader of HaBayit HaYehudi, gestures after casting his vote for the parliamentary election at a polling station in Raanana, near Tel Aviv, Jan. 22, 2013. - REUTERS/Nir Elias

Just as it happens in the opening chapter of The Metamorphosis by Franz Kafka, the Palestinians woke up one day in mid-June to find that they, too, had undergone a metamorphosis. However, unlike the protagonist of the novella by the Jewish-Czech writer, they have not been transformed into a creepy-crawly, but rather into “shrapnel in the butt” of Economy and Trade Minister Naftali Bennett, leader of the HaBayit HaYehudi party. As a matter of fact, they were not all that surprised. The feeling that they stand in the way of the realization of the grandiose vision of the Greater Land of Israel, propounded by the HaBayit HaYehudi party, is nothing new to them. Ironically, the word “butt” in Hebrew shares the same semantic root with the words “to settle” and “settlement.” And the Palestinians are no doubt obstructing the implementation of the vision led by Bennett’s movement — that of Jewish settlements in the heart of the West Bank.

Bennett presented the “shrapnel in the butt” metaphor on July 17, in an address to the Judea and Samaria Council, and notwithstanding the storm raised over the analogy, he has not retracted his words.

“I'll tell you a quick story. I have a friend called Yoav. He served in the IDF [Israel Defense Forces] Golani Brigade and in a clash, shrapnel got stuck in his butt. I came to visit him in the hospital, and he told me, ‘Look, I have this shrapnel. … According to the doctors, I have two options: either to have an operation to remove the shrapnel, running the risk of becoming handicapped, crippled for life, or to leave it there, although from time to time, at the change of seasons, it may hurt a bit.’… So, he decided to continue living with it. … There are situations where deceptive striving for perfection is liable to cause a disaster.”

And for the benefit of those who still were not sure what he meant, Bennett introduced the moral:

“The attempt to establish a Palestinian state in our homeland is over; it has reached a dead end.”

And now, seriously: No parliamentarian or cabinet member — whether European or American — would have dared utter such an outrageous analogy between, let’s say, the state of Israel and shrapnel in the butt, the way the Israeli economy minister has taken the liberty of doing. Chances are the concerned party would have been asked to pack up their stuff and quit the very same day. However, here (almost) anything goes.

Yet, as you would expect, the metaphor used by Bennett has provoked widespread condemnation. Even Finance Minister Yair Lapid — the so-called “brother” of the HaBayit HaYehudi chairman — disapproved of the style, alas not of the content. At the same time, the Palestinian Authority's reaction has been surprisingly restrained. Its spokesman refrained from responding in kind, and rightly so. Why should it get into a below-the-belt battle of insults when Bennett is doing the work for them and exposing Prime Minister Benjamin Netanyahu and his government in their disgrace, that is, the built-in diplomatic paralysis entailed by the coalition makeup.

“These statements are not only a message to US President Barack Obama’s administration, which is exerting continuous efforts to revive the peace process … (but) dangerous and destructive statements that stand against everyone who believes in the two-state solution, a just peace and the establishment of an independent Palestinian state on the 1967 borders with Jerusalem as its capital," said Nabil Abu Rudeineh, spokesman of Palestinian Authority Chairman Abu Mazen (Mahmoud Abbas).

Saeb Erekat, who had formerly served as chief negotiator for the Palestinians in the talks with Israel, said, "Israel seeks to bury the two-state solution. … It is time for the international community to hold Israeli ministers accountable for their statements." Erekat said that the statements made by Netanyahu on the issue are all meaningless.

While the style employed by Bennett stirred up quite an uproar in Israel, only a few made reference to the content of his statements or to their import — which cannot be lightly dismissed — as these statements have been made by one of the most powerful ministers in the government.

“Anyone who wanders around Judea and Samaria knows that what they say in the corridors of Annapolis and Oslo is far removed from reality,” Bennett said. “There are 400,000 Israelis living in Judea and Samaria and another 250,000 in east Jerusalem. ... We need to move on from a situation (where we have to figure out) how to convince others that a Palestinian state is an improbable notion toward a stance that treats this idea as something that is behind us.."

The tongue-tied syntax thus being in the original.

In this case, however, it is no longer merely a question of style, but rather one of simple math.

Deliberately presenting a blown-up number of settlers is not Bennett's invention. Over the years, the Judea and Samaria Council spokesmen have adopted the tactic of “amplifying” the number of settlers in the West Bank so as to create a false picture that would forestall any thought of a potential evacuation and undermine the two-state solution.

Going on the official data released, which have been confirmed even by the Judea and Samaria Council and corroborated by all the parties who follow the Judea and Samaria settlement map, the number of settlers in the West Bank is 330,000 — 70,000 less than the number cited by Bennett. Most of them live in the large settlement blocs, while only about 50,000 have settled on the slopes of the Judean mountain ridge.

The number of Israelis living in east Jerusalem currently stands at 193,000 — 57,000 less then declared by Bennett.

A simple calculation shows that Bennett has inflated the number of settlers, adding to it nearly 130,000 — but who's counting? By the way, according to the Israeli Central Bureau of Statistics, the population of Israel numbers 8 million inhabitants, while the settlers account for a mere 6.5% of the population. Given the 46 years of occupation and the ongoing settlement enterprise — which has been run all along without interference — it is not an especially impressive number.

My colleague Akiva Eldar exposed here, in Al-Monitor, the public opinion poll commissioned by Ariel University, whose findings indicate a decline in public support for the settlement enterprise, in general, and a deterioration of the public image of the settlers, in particular. That's all well and good, but it is the official policy of all Israeli governments, including the present one, that has consistently determined the facts on the ground. It has been this way ever since December 1975, when then-Defense Minister Shimon Peres accorded his support to the Gush Emunim settlers, who established the first settlement in the West Bank, in Sebastia, in the environs of Nablus. (Let me take this opportunity to wish President Peres a happy 90th birthday.) And it is bound to always be that way. This policy gives rise to a reality that rules out any potential solution of peace. It is, incidentally, the same solution that Netanyahu said he was acting to implement in his (2009) Bar-Ilan address — envisioning two states for two peoples living side by side, in amity and mutual respect. Alas, as is invariably the case with Netanyahu, talking is one thing, doing is another.

Back to Bennett's speech. Outlining the way to prevent the “fantasy of the corridors of Annapolis and Oslo” from materializing, Bennett stated:

And that’s where the question of essence comes into play. If anyone still doubted that this was the course followed by the Israeli government policy, then Bennett has come and, like Deputy Defense Minister Danny Danon (Likud) two weeks ago on June 8, laid bare the naked reality.

In this instance, Bennett’s choice of words was quite fitting and accurate: “Build, build, build.” Build in the settlements, giving them precedence over Israeli towns and villages within the Green Line.

And if you need any further proof, take a look at the new budget submitted to the Knesset by Bennett’s “brother” Lapid. Brandishing the sword of budget cuts, Lapid revoked at a stroke the housing grant of NIS 100,000 (just over $27,700) designed to encourage young Israeli couples seeking to buy an apartment in the development towns and the periphery.

The settlements, though, he has spared.