Iranians in the US and Europe try to mobilize support for free and fair elections to highlight restrictions in Iran's June 14 presidential vote. 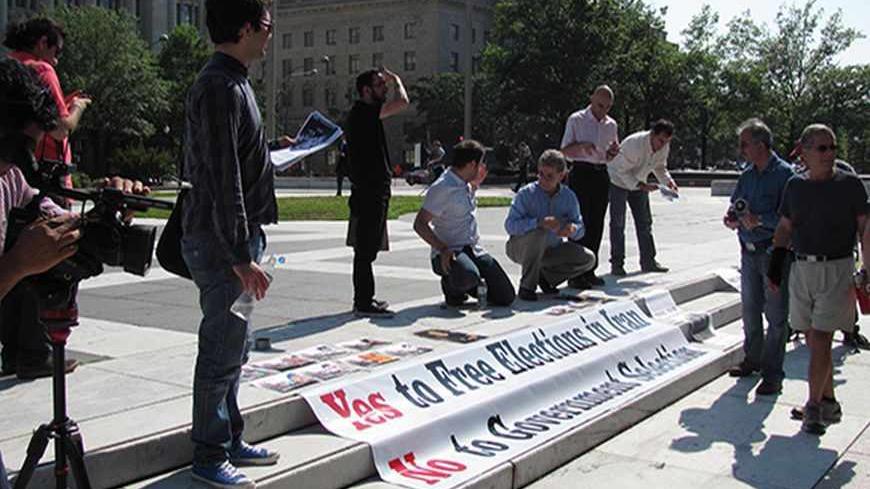 A modest crowd turned out for a rally in Freedom Plaza, just blocks from the White House, protesting lack of choice in Iranian presidential elections, in Washington, D.C., June 8, 2013. - Barbara Slavin

The weather was ideal for a demonstration: sunny and not too warm for Washington, D.C. Yet only about 30 people turned up on Saturday [June 8] to call on Iranian authorities to permit a free and fair election for president this week.

The small crowd in downtown Washington’s Freedom Plaza, only a few blocks from the White House, was a fraction of the size of rallies held in 2009, when Iranians abroad were energized by an unexpectedly lively campaign between incumbent Mahmoud Ahmadinejad and two reformers and then continued to demonstrate in large numbers to protest allegations of election fraud.

Those attending on Saturday were philosophical about the turnout.

“You cannot expect people outside to do much more than those inside,” said Amir Etemadi, a former student activist in Iran who said he is now a member of a group called the Iranian Association for Democracy and Modernity.

There are several million Iranians outside Iran and close to one million in the United States alone. While most care deeply about what is happening in their homeland, a small minority is actively trying to influence Iran’s political trajectory.

A new umbrella group, United for Democracy for Iran, held a conference in Sweden last month that attracted ex-officials of the Islamic Republic, ousted reformers and monarchists who denounced the June vote and called on Iran to allow free elections. Among the group’s leaders is Mohsen Sazegara, a founding member of the Revolutionary Guards who broke with the government and left Iran a decade ago, and human rights activist Mehrangiz Kar.

There have also been concerts including one in Berlin on Sunday, where an international cast of singers performed to support Iranians’ democratic aspirations and called for the release of political prisoners.

Some of the efforts are on-line and involve collaboration with veterans of campaigns for democracy in other authoritarian countries.

The Russian chess champion and political activist Gary Kasparov is working with Iranian activists on “We Choose,” which seeks to provide Iranians with an alternative means of registering their electoral preferences.

Using a virtual voting platform that is said to be secure from government monitoring — though it’s hard to be sure in this day and age of metadata and uber-surveillance — the campaign encourages Iranians inside Iran to vote for one of 20 candidates. They include the eight men approved last month by the Guardian Council, the appointed body that vets candidates for elected office in the Islamic Republic. Among the other 12 are former president Akhbar Hashemi Rafsanjani and Ahmadinejad ally, Esfandiar Rahim Mashaei, who were both disqualified by the Council, as well as former president Mohammad Khatami and a number of imprisoned dissidents. Reza Pahlavi, the son of the deposed Shah of Iran, and Maryam Rajavi, the leader of the cultist Mujaheddin-e Khalq, are also on the virtual ballot.

“It’s an international group to allow Iranians inside a portal to vote symbolically for a more diverse platform of candidates,” Nazie Eftekhari, an Iranian-American businesswoman from Minnesota and supporter of the effort, told Al-Monitor. “It was tried before in Russia and is a secure platform … and a nonviolent way for people to express their views.”

Whether the virtual voting will be any more representative than the actual vote is unclear. Turnout is likely to be much smaller than in 2009 — when tens of thousands of Iranians in the diaspora also voted at Iranian missions abroad. In general, the subdued atmosphere is more similar to the 2012 legislative elections  than to a presidential contest.

Organizers of protests outside Iran are not overplaying expectations about what they can accomplish in the short term.

In 2009, “a lot of young people [outside Iran] saw a reflection of themselves in the young people of Iran,” said Mehdi Amini, a founder of the Solidarity Committee to Protect the People’s Will, a Virginia-based group that formed after the 2009 elections and which organized the Washington rally. “Unfortunately, that movement was crushed and a lot of people lost hope here and there.”

Etemadi said that in 2009, Iranians got to choose between “bad and worse” — referring to the contest between former prime minister Mir Hossein Mousavi and Ahmadinejad. “Now it’s between worse and more worse,” Etemadi said. Eight years from now, he predicted that the choice would be reduced to one between nuclear negotiator Saeed Jalili and Qasem Soleimani, the head of the Qods or Jerusalem force of Iran’s Revolutionary Guards.

Amini, who said he supported the 1979 revolution, expressed hope for "slow change but not too slow" in Iran's political system.

Eftekhari also explained the lack of mobilization by referring to the events of 2009. "I think a lot of people are withdrawn or sad because they are recalling the energy and enthusiasm of the last elections, the Green Movement and the Green Wave that followed," she said. "Now the leaders of that movement are captives of the regime. A lot of people appear to be resigned. People inside are struggling."

Still, she said, “doing something is better than sitting back and cursing the stars.”