The Iranian government in 2012 staged calm parliamentary elections that resulted in victory for loyal supporters of the supreme leader; it hopes to do the same during this year’s presidential vote. 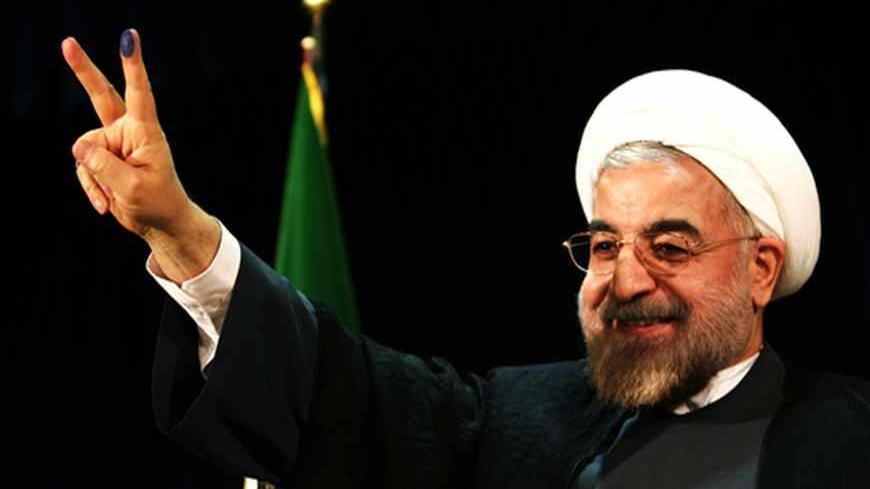 Iran's former top nuclear negotiator Hassan Rouhani flashes a victory sign after registering his candidacy for the upcoming presidential election at the Interior Ministry in Tehran, May 7, 2013. - BEHROUZ MEHRI/AFP/Getty Image

With the Guardian Council’s elimination of Akbar Hashemi Rafsanjani and Esfandiar Rahim Mashaei from contention, Iran’s upcoming presidential vote looks likely to be a reprise of the 2012 parliamentary elections — victory for the camp of Supreme Leader Ayatollah Ali Khamenei but with a relatively low turnout.

Popular enthusiasm for the eight men approved by the Guardian Council on Tuesday (May 21) has been restrained, to say the least. Many middle-class Iranians are likely to stay home rather than choose among six close associates of Khamenei and two men — Hassan Rouhani and Mohammad Reza Aref — with pragmatist/reformist credentials but little popular following.

Last year’s parliamentary elections took place in an atmosphere of tight security and controls over free expression. Although the government claimed that 64% of registered voters participated, the figure was believed to have been inflated to increase the appearance of popular support and government legitimacy. A joke that made the rounds in Tehran at the time said that “80% of the people are sitting home watching 70% of the population vote on TV.”

The Guardian Council, which vets all candidates for elected office, pruned the list of those seeking to run for parliament of most reformists and pragmatists and even supporters of President Mahmoud Ahmadinejad, who has fallen out with Khamenei since the disputed 2009 presidential elections. As a result, candidates identified as Khamenei loyalists took more than 70% of the 225 parliamentary seats awarded in the first round and now dominate the 290-member body.

The mood in Iran now is even more downcast than it was a year ago. The unofficial value of the currency, the rial, has depreciated another 40% against the dollar, inflation and unemployment are higher and nuclear negotiations that resumed this year have not brought any relief of Western sanctions — or any near-term prospect for a deal.

In contrast to the almost party-like atmosphere that preceded the 2009 elections, the government has followed its 2012 script and arrested journalists, closed newspapers and slowed the Internet to what one Iranian newspaper called “coma” status. Security officials were out in force in Tehran this week merely for the announcement of approved candidates by the Guardian Council, giving a good indication of what they are likely to do during the actual voting on June 14.

On Wednesday (May 22), the state-run Islamic Republic of Iran Broadcasting network announced that there will be no televised presidential debates this year because of the large number of approved candidates. Televised debates in 2009 were a factor in encouraging a large turnout as they featured lively confrontations between Ahmadinejad and his rivals.

Asked if he would vote, a young Tehrani, speaking on condition of anonymity, told Al-Monitor that he would not because there was no one running who was worth the effort.

There is also no assurance that the votes will be counted accurately. A new 11-member committee appointed by Khamenei will oversee the tabulation nationwide instead of the Interior Ministry, which is affiliated with Ahmadinejad.

Yasmin Alem, an expert on the Iranian electoral systems, told Al-Monitor that the parliamentary elections of 2012 had turned out to be a good template for this year’s polling, as far as the government is concerned.

“The successful and incident-free 2012 parliamentary elections showed that the ruling establishment in Iran has learned from its past mistakes and can now screen and select candidates and orchestrate ‘acceptable’ participation in elections,” she said.

Most of all, the supreme leader and his supporters want to prevent a repeat of 2009, when an unexpected surge of enthusiasm for former Prime Minister Mir Hossein Mousavi led to a record turnout of 85% — and a violent letdown among millions of Iranians after Ahmadinejad was declared the winner by a robust 63% shortly after the polls closed.

With Mousavi and his fellow candidate Karroubi under house arrest for more than two years and former President Rafsanjani and Ahmadinejad ally Mashaei disqualified, there seems little danger that the 2009 experience will be replicated.