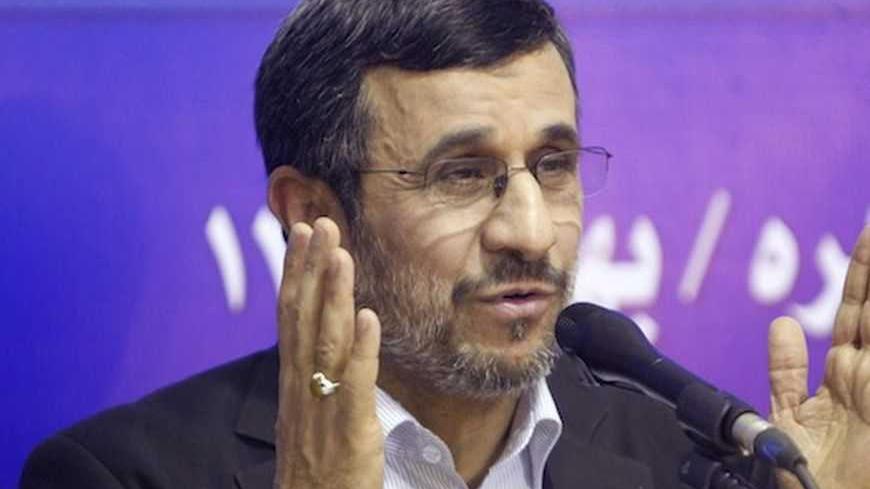 Iranian President Mahmoud Ahmadinejad talks during a news conference at the end of his visit to Cairo, Feb. 7, 2013. - REUTERS/Asmaa Waguih
Mehdi Jedinia
February 13, 2013

As he prepares to give up his office, Iranian President Mahmoud Ahmadinejad is using what remains of his public platform to protect his followers and try to leave a lasting legacy in the Islamic Republic.

In his speech Sunday [Feb. 10] marking the 34th anniversary of the Islamic Revolution, Ahmadinejad used a slogan — "Viva Spring" — that sought to piggyback on the Arab uprisings of the past two years and suggest that Iran would likewise benefit from greater transparency in government.

That Ahmadinejad should continue presenting himself as an agent of change nearly four years after "winning" fraud-tainted elections may strike observers as ironic, if not absurd. The widely presumed beneficiary of vote rigging in 2009, he went so far as to accuse the government of planning to "engineer" the next elections this June.

Yet in his willingness to dish dirt on other prominent figures in the regime — such as the family of parliament speaker Ali Larijani — Ahmadinejad is demonstrating, once again, his populist street-fighter origins. He is, after all, the man who campaigned on a slogan of sharing Iran’s oil wealth and who championed giving cash payments as part of subsidy reform — even as Supreme Leader Ayatollah Ali Khamenei’s refusal to allow an accommodation with the West over the nuclear issue in 2009 has led the country down a path of increasing diplomatic isolation and economic hardship.

During Ahmadinejad’s presidency, most domestic reformists found their aspirations frustrated, while the majority of international spectators put the idea of major political change in Iran on the back burner. Hopes were raised by the massive post-election protests of 2009, but they fizzled along with the Green Movement, whose leaders have now spent two years under house arrest. No alternative to the regime has emerged: neither the Shah’s son, who lives in exile in Maryland, nor the cultish Mujaheddin-e Khalq, newly de-listed from the U.S. State Department’s roster of terrorist organizations, has much appeal for most Iranians.

It is Ahmadinejad, ironically, who emerges as the “man of the people” with the guts to challenge the ruling clerics and their powerful offspring. Former president Akbar Hashemi Rafsanjani and his family have been isolated partly by Ahmadinejad's efforts. Now, at the end of his term, Ahmadinejad is going after other power centers like the Larijanis, in defiance of the Supreme Leader’s injunction to avoid further dividing an already fractured political class.

There are doubts outside Iran over the authenticity of the infighting within the regime, which reached a peak earlier this month with the impeachment of the labor minister and Ahmadinejad’s playing of a recording before parliament alleging corrupt deals by Ali Larijani’s youngest brother. Ahmadinejad’s suggestion in his revolution-anniversary speech that he was ready to engage in dialogue with the U.S., whether real or rhetorical, was also striking, coming just after the Supreme Leader gave a speech refusing a U.S. offer of direct talks.

These actions show that Ahmadinejad is not willing to give up easily and is seeking to limit the Supreme Leader’s influence over all critical matters of state, including picking envoys to engage in nuclear negotiations and setting policy toward Washington.

Meanwhile, the term “Viva Spring,” used by Ahmadinejad during his Feb. 10 speech, was interpreted in Iran as a campaign slogan to be employed by Esfandiar Rahim Mashaei, his controversial vice president, as a candidate in the coming presidential race. Some observers saw the remark as outreach to the West to support an Iranian version of the “Arab Spring” led by Mashaei.

The test of Ahmadinejad’s legacy will come in the next few months as the president threatens to reveal more information collected by his aides about high-level corruption. If the Guardian Council, which vets all candidates for elected office, allows Mashaei to run for president, that will be potent evidence that the street fighter Ahmadinejad has the ammunition to blackmail the regime and that his faction will survive for at least a while after he is no longer president.

Mehdi Jedinia is an Iranian-American journalist and social-media activist.