Speaking days before the second anniversary of his father’s detention, Mohammad Karroubi urges the Obama administration and the international community to focus more on Iran’s poor record on human rights but expresses optimism about upcoming nuclear talks which, he hopes, will lead to easing of economic sanctions. 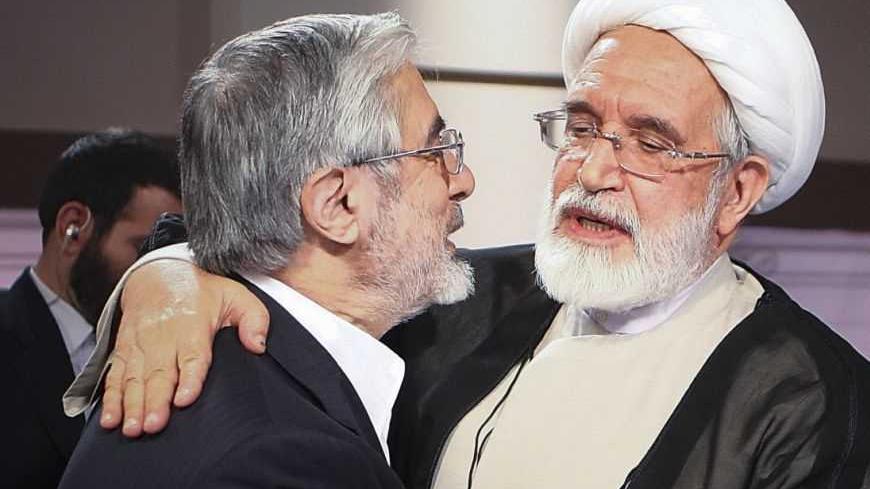 On Friday, Feb. 15 it will be two years since the Iranian government deprived two former pillars of the system — former Prime Minister Mir Hossein Mousavi and former parliament Speaker Mehdi Karroubi — of their freedom of movement.

The two leaders of what became known as the Green Movement after the fraud-tainted 2009 presidential elections remain in legal limbo — not formally charged with any crime — yet isolated from society by a regime that is under growing pressure from within and outside the country.
On Monday, authorities detained for several hours two of Mousavi’s daughters and one of Karroubi’s sons in what may have been an attempt to pre-empt new protests around the anniversary of the detention.
Mohammad Karroubi, a scholar of international law — and the only one of Karroubi’s four children currently outside Iran — told Al-Monitor in an interview from London that he was surprised at the latest detentions since the children have not done anything apart from issuing an open letter to the Iranian people asking for their parents to be freed.
“There was no demonstration, just a simple letter,” Mohammad Karroubi said. “Look at how the system is sensitive about the simplest things.”
Karroubi, who left Iran last year after being deprived of the right to teach international law, said security forces also ransacked his brother’s home.
Eight security men were “searching, looking for documents related to political issues,” Mohammad Karroubi said. “The confiscated mobile phones, a lap top, a computer and even a checkbook and deeds.”
Karroubi attributed these actions — as well as the detention of his father and Mousavi and Mousavi’s wife — to what he called a growing lack of confidence within the government caused by international pressure and internal divisions.
“It is so difficult to understand what they want to do,” Karroubi told Al-Monitor in response to a question about how long his father and Mousavi would be detained. “The situation in Iran is not good at all regarding the economy as well as the political situation … They are so afraid that when [Mousavi and Mehdi Karroubi] are back into the society, if they started to talk and criticize the system, the government doesn’t have enough confidence to tolerate that.”
Mehdi Karroubi and Mousavi were arrested after calling for demonstrations on Feb. 14, 2011, in solidarity with Arab uprisings. Since then, the Green Movement has seemed largely dormant — or at least unable or unwilling to call large numbers of Iranians into the streets.
Karroubi expressed concern about the physical and mental well-being of his father, 74. Although he is technically under “house arrest,” his son said that his father is being held not in his own home but in a former office building in north Tehran.
“In the last four months, he has not seen the sun or smelled fresh air apart from three times when they [security forces] took him to the hospital” for tests for digestive problems, Mohammad Karroubi said. “There is no garden where can go and walk … It is not house arrest. In his house, he could have access to his library, the radio — even the kitchen.”
The authorities have permitted Karroubi’s wife to bring him home-cooked food but that is the only relief from isolation, his son said.
Mohammad Karroubi said the Iranian government is in a quandary as it approaches new presidential elections in June.
“The system has decided to engineer the election and fix the result,” he said. “At the moment, the difficulty is inside the government” where the conservative elite is increasingly fractured.
A week ago, the divisions erupted in an embarrassing public display of anger between Ahmadinejad and the current parliament speaker, Ali Larijani. At a parliament session that impeached Ahmadinejad’s minister of labor and social welfare, the president played the tape of a recording allegedly of one of Larijani’s brothers involved in a corrupt business dealing. A controversial former Tehran prosecutor, Saeed Mortazavi, who has been implicated in serious human rights abuses but has been protected by Ahmadinejad, was arrested and released after a day.
Obliged to leave office this summer, Ahmadinejad seems determined to remain politically relevant even if his defiance only further undermines public support for the system. On Sunday [Feb. 10] in the president’s annual address marking the anniversary of the 1979 Islamic revolution, Ahmadinejad “talked about the engineering of the [2013] election — the person who benefited from the system four years ago,” said Karroubi, noting the irony of the president’s complaint.
Mehdi Karroubi, a cleric who served as parliament speaker from 1989 to 1992 and 2000 to 2004, has charged that he was twice the victim of electoral fraud. In 2005, when he first ran for president, he seemed to be amassing enough votes to enter a run-off against former president Akhbar Hashemi Rafsanjani. But Ahmadinejad, then a relatively obscure political figure, was declared the runner-up to Rafsanjani and defeated the former president in the second round of voting.
The irregularities were even more egregious in 2009 and led to the biggest mass protests against the regime since the revolution. As a result, the government is likely to limit the candidates this year to dependable loyalists.
Despite his concern for his father and about upcoming elections, Mohammad Karroubi said he remained optimistic about Iran’s political future.
Many influential clerics in Qom, Karroubi said, are criticizing the regime, which purports to follow Islamic precepts. In addition, he said, Iranian young people are eager for reform.
Karroubi criticized the Obama administration for focusing too much on Iran’s nuclear program and not sufficiently on human rights. He said current sanctions were undercutting chances for peaceful political progress in Iran and expressed hope that upcoming negotiations would lead to an easing of these sanctions.
“If the pressure from the international community — the European Union as well as the United States — is lifted step by step, the situation inside the country will get better politically,” Karroubi said. “Under the current situation, they [Iranian authorities] are scared about everything.”
Barbara Slavin is Washington correspondent for Al-Monitor and a senior fellow at the Atlantic Council, where she focuses on Iran. She tweets @BarbaraSlavin1.