Inviting Iran to the Geneva II conference on Syria would be an encouraging gesture from Washington, supporting President-elect Hassan Rouhani in his moderate stance. 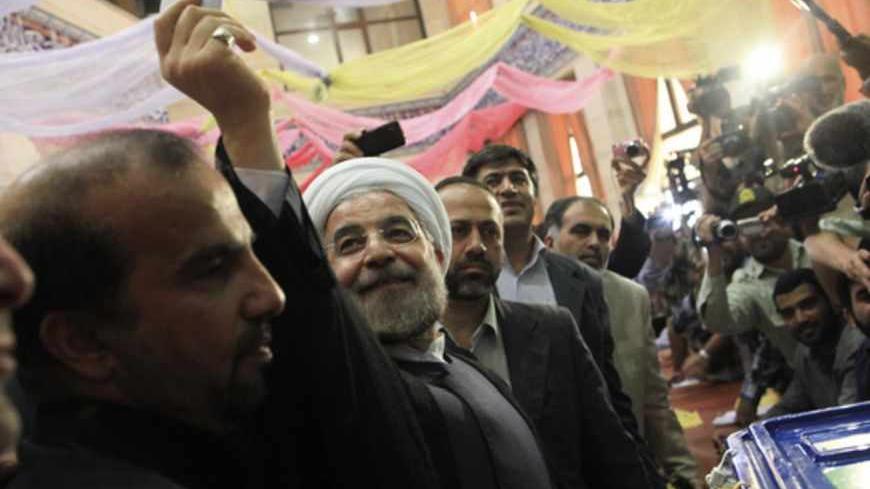 Then-presidential candidate Hassan Rouhani shows his ballot before casting it during the Iranian presidential election in Tehran, June 14, 2013. - REUTERS/Yalda Moayeri

This threat has two dimensions: an actual military threat from the United States and Israel, and the perceived threat from local rivals in minimizing Iran’s regional role.

The dominant view among Iran’s analysts is that the Islamic Republic’s support of the Syrian regime is a constant in Tehran’s regional policy and crucial to keeping the resistance bloc intact. The policy hasn’t changed with the different pragmatic, Reformist and Principalist governments of Rafsanjani, Khatami and Ahmadinejad, respectively.

But the reality is that Iran’s active presence in the Levant is directly connected to the preservation of Iran’s national security and interests in the region. The Syrian crisis has brought about new national-security challenges for Iran. The direct threat came from the United States and its Western allies when they made regime change in Syria a starting point to weakening Iran’s regional role, its nuclear stance and perhaps regime change in Iran.

Iran’s regional rivals also saw an opportunity in the Syrian crisis to weaken its position in the region. The challenge has come not only from traditional rival Saudi Arabia, but also Qatar and Turkey, once a friendly state, as both took the opportunity to contend with Iranian influence. Together, the three states have formed a bloc to minimize Iran’s regional role. Therefore, Iran had no choice but to react or give ground on its traditional influence to its rivals.

It is interesting to observe how the US and the West, just like in Iraq and Afghanistan, lost Iran’s influential role in solving the Syrian crisis at the onset. By minimizing Iran’s role in the Syrian developments and calling Iran part of the crisis in the country, the US marginalized the moderate voices inside Iran that sought meaningful changes and reform by the Assad regime. This provided the ground for the military-security elites to justify calling Syrian regime change an immediate threat to Iran’s national interests and security, subsequently shaping Iran’s Syria policy.

Unlike countries like Egypt and Syria, which shape and conduct their political-security strategies based on their defeats in wars with Israel and losing land such as the Golan Heights, a great part of Iran’s active presence in the region aims to pre-empt future threats and keep its alliance with friendly states and political factions.

Experience shows that in an interactive atmosphere and in the course of negotiations, Iran becomes more accommodating and constructive in settling a regional crisis. While Iran cooperated with the United States in establishing the new Afghanistan in the Bonn conference in 2001, it strongly opposed US regional policy when its national security was endangered by aggressive American calls for regime change after the victories in Afghanistan and Iraq.

Therefore, the degree of change in Iran’s regional policy directly depends on the actual and perceived threats that Iran sees from Washington and its allies in the region. The more threats posed to Iran, the more active Iran’s presence in the region, and vice versa. Iran is likely to employ all the sources of its national power, including ideology, to preserve its national security and interests.

The time has come that the United States agrees to change its policy in return for a change in Iran’s regional policy, including that of the Syrian crisis. This change could start with including Iran as part of a compromise solution in Syria, addressing Iran’s legitimate security concerns and simultaneously removing the perceived threat of halting Iran’s nuclear program through weakening Iran’s regional allies.

Inviting Iran to the Geneva II conference is a good start to give the newly elected president of Iran the opportunity to prepare the ground for his “moderation” discourse to take roots in Iran’s domestic politics and regional policy.

Kayhan Barzegar is the director of the Institute for Middle East Strategic Studies in Tehran and a former research fellow at Harvard University. He also chairs the Department of Political Science and International Relations at the Islamic Azad University in Tehran.