Israel Should Give Rouhani a Chance

The election of Hassan Rouhani as Iran's next president proves that the Iranian people seek change. 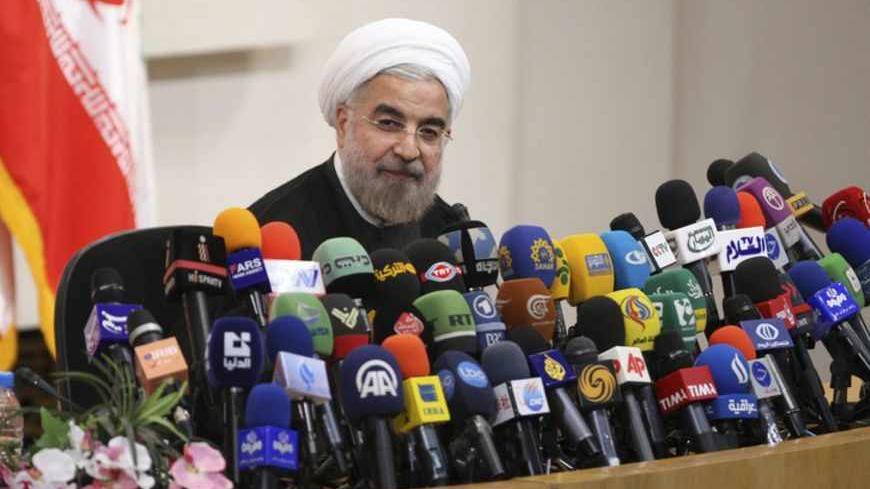 It’s time we admitted the truth. Despite all the enormous efforts by the international intelligence community directed toward Iran in recent years, we really don’t know much about what is going on in the Land of the Ayatollahs.

The United States, Israel and other Western nations have launched sophisticated cyber-attacks against the nuclear reactor systems in Bushehr. Intelligence agencies know the exact role of every nuclear scientist in Iran, and where they can be found at any given moment. But despite all that abundant intelligence, there is one basic thing that they didn't understand about this enormous country: the public state of mind.

Some 18.6 million Iranians (50.7% of all eligible voters!) proved this by casting their ballots for the moderate reformist, newly elected Iranian President Hassan Rouhani. The popular unrest over outgoing Iranian President Mahmoud Ahmadinejad’s policies was even greater than estimated, and it was this that motivated millions of Iranians to say “No” to the country’s spiritual leader, Ali Hosseini Khamenei, and to vote for what was good for them. By the way, this shows that there is something else we should admit, even if it ruins the image of Iran that we have long since etched in our minds: Despite everything else, the Land of the Ayatollahs has some modicum of democracy. True, Iran is not a liberal country. It receives no high marks for its record on human rights. Nevertheless, the elections there proved that the people exercised their right to replace their leaders.

After the 2009 elections, in which Mahmoud Ahmadinejad was barely elected, the world watched as the reformists’ Green Movement took to the streets in protest. Tens of thousands of students and other young people chanted angrily, “Where’s my vote?” They were giving voice to the prevalent feeling that the election results were rigged. But instead of seeing these protests as the precursor of what would be called the “Arab Spring” (at the time the media dubbed these protests the “Twitter Revolution”), we paid closer attention to the way these protests were so brutally suppressed. We created a certain narrative for ourselves and determined that “whatever happened then would happen again.”

Despite public protests against Iran’s nuclear program and the dire economic straits that the regime imposed on its people, there would be no real change. Quite a few observers looked at the various candidates for presidency and decided unanimously and with great consternation that Khamenei’s candidate (the conservative mayor of Tehran, Mohammad Bagher Ghalibaf, who received just 16.56% of the vote) would inevitably be elected. Everything else was a done game of politics.

Over the past year, I had the opportunity to meet with a number of young Iranians who told me what people really feel in Iran. I was amazed at how open they were with me, when they said that they are just waiting for a chance to express their opinion in the upcoming election. One such encounter occurred in Armenia, along Iran’s border, where I met with families and young people from Iran, who had come to do some shopping there, their most affordable neighbor. They knew that I was an Israeli, but it seemed as if this only increased their desire to share their resentment, felt by many, toward Ahmadinejad’s government with me. One thing stood out among everything they said. They all expressed a passionate desire to rejoin the family of nations. I particularly remember what one of them told me: “So many of us young people in the universities are ashamed to have a president, who is an embarrassment to our intelligence.”

Another encounter, which I described on this site, took place during a visit to Turkey. I met with a group of vacationers from Esfahan who said, “The situation back home is not good.” They then went on to share their feelings with me: “We hope to see change.” They also expressed their anger and contempt toward Ahmadinejad and his insistence on building a nuclear bomb, despite all the international indignation.

It is also worth noting that everyone I met and filmed was happy to meet an Israeli. They were well aware that I intended to publish their videos, but none of them were concerned by this. None of them, that is, except for one young man, who used heart-wrenching terms to describe the tension between the popular desire for change and the fear of the regime that still dominates the country.

“Aren’t you worried that I’m filming you? Won’t that cause you problems?”

“No, everybody is saying that.”

“So what? You’re just like me and everybody else.”

He then drove off, but he returned a few minutes later, apparently at the behest of his friends. He asked me to “protect him.” I blurred his face.

And so it was. All it took was some random conversations with students, young people and families from Tehran and Esfahan for me to get a sense of the general mood in Iran, which was being forced to follow in Ahmadinejad's path.

Yet, even now that the official election results have been released, here in Israel we are returning to the narrative that we created ourselves. We have a hard time switching gears.

At the last Cabinet meeting [June 16], Prime Minister Benjamin Netanyahu announced that the person who ultimately determines Iran’s policy is Supreme Leader Khamenei, and that the new President Rouhani once called Israel a cancer. Minister of Justice Tzipi Livni and Minister of Strategic Affairs Yuval Steinitz even recommended in a radio broadcast that the world must continue to apply pressure to Iran so that Rouhani can be tested in deeds, not words.

With your permission, I would like to give them one small piece of advice. Listen to the voice of the Iranian people, who elected a moderate president in the first round. Look at the pictures of young Iranians celebrating, and realize that what happened then could not possibly happen again. Listen to Hassan Rouhani himself, who was hardly the spiritual leader’s preferred candidate, and instead of tightening sanctions, help him. I have written here in the past that the wisest thing to do right now is to take the first step in a process of reconciliation between Iran and the West. Ease the sanctions now, so that it will be easier for the newly elected candidate to compromise.

In politics it is important to know when to ease up, and when to show respect for the other. In this particular case, respect is the best ladder for the new Iranian president to climb down from the tree of threats planted by his predecessor and to fulfill the will of the people.