Post-Ahmadinejad Iran: A New Challenge to the West

Shlomi Eldar argues that with the upcoming elections in Iran, the international community should try another, more conciliatory approach. 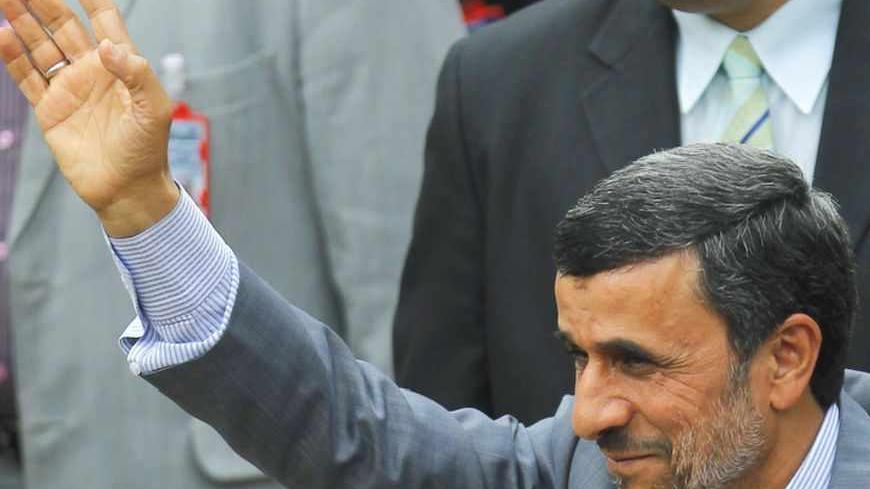 Iranian President Mahmoud Ahmadinehad has just a few months left in office. People in Iran, as well as in the West, are expected to sigh in relief when he finally exits center stage and leaves the presidential office as soon as the elections, scheduled for June 14, 2013, are finally over.

I am well-aware of the attitude that this particular Iranian president was “good for the Jews.” It is an approach that I have even seen expressed on this very website. According to this particular perspective, Ahmadinejad’s fundamentalism and his anti-Semitic comments were a strategic and public relations boon for Israel and its efforts to recruit the international community against Iran’s nuclear program. I dispute that point of view.

Ahmadinejad has placed Iran’s nuclear ambitions  at the top of that country’s national agenda. He personally instated the dynamic by which any concession is perceived as an act of surrender and any compromise is seen as a sign of weakness. The situation today is that any candidate who wants to step into the current president’s shoes will have no choice but to play by the same volatile set of rules that Ahmadinejad put in place. In other words, Ahmadinejad placed a loaded nuclear pistol on the desk of the incumbent president and forced him, even before he was elected, to choose between two detrimental alternatives: The future president can move ahead with the nuclear project and bring the wrath of the entire world against him; or he can call a halt to the program and be considered a capitulating coward.

Ahmadinejad is a former student revolutionary who rose through the ranks to attain the highest political office in the Islamic Republic. During his time in office, he set his country on a collision course with the rest of the world. But over time, he lost favor in the eyes of the country’s spiritual leader  Ayatollah Khamenei, the one man who confirms the religious eligibility of any candidate who hopes to make an impression in that crowded presidential race. Given the economic sanctions that the West imposed on Iran, the timetables set before it, and President Barack Obama’s “red lines,” there is no doubt that the coming elections will be the most fascinating the country and the world have seen since Khomeini’s revolution in 1979.

The race for president is well-underway. The candidates are competing over who is more politically dexterous to give the sense that “they are going with” (nuclear weapons), while “feeling like they are without” (by eliminating the sanctions). None of them is entirely able to completely ignore the sanctions that have devastated the Iranian economy, the terrifying drop in the value of the rial and the very real threats of war hovering in the background.

It should also be noted that even those Iranians who oppose the blind race after nuclear armaments — and there are many — and who are absolutely convinced that having a strong economy is preferable to having an atomic bomb and other weapons of deterrence, still have problems connecting with a weak candidate with a diminished sense of “national pride.” They have problems supporting a leader who will not stand firm against pressure from the West. After all, no nation likes a weak leader. Even the pragmatic forces in Iran and the supporters of reform would prefer a leader who radiates strength. This is true even of those who struggle for a new dawn in the Islamic Republic.

A survey conducted by the Islamic Republic of Iran Broadcasting (IRIB) network, which was recently released, shows that there are two leading personalities, which could have the highest chances of being elected; two former presidents: Mohammad Khatami and Hashemi Rafsanjani. It should be noted that they have said in the past that they will not present their candidacy, but Rafsanjani did not deny it either, and might make an announcement on the issue in the coming days.

In the third place stands the mayor of Tehran, Mohammad Bagher Ghalibaf. The latter has even formed a political bloc together with Ali Akbar Velayati, a former foreign minister and adviser to Khamenei, and with Gholam-Ali Haddad-Adel, the former speaker of the Majlis.

Obviously, each of these men needs the support of Iran’s ultimate authority, Ayatollah Khamenei. Not one of them would dare propose any new policies that run counter to his worldview. Not one of them would dare say, either before the elections as part of their campaign, or after the elections, regardless of who wins, that they are putting Iran’s efforts to become a nuclear power on hold to get sanctions lifted.

Despite the differences between them, Khamenei threw his significant clout behind Ahmadinejad in a speech to mark Nowruz (the Iranian New Year). A summary of his speech that appeared on the IRIB website in Hebrew reads:

“The Iranian people have succeeded in overcoming the pressures and embargo imposed by the forces of arrogance. Our enemies have tried to harm Iran in all areas, but mainly economically and politically. Nevertheless, their efforts were futile. It is incumbent on the Iranian people to thwart these hostile ploys.” In other words, Iran is the victim, and it must fight the good fight against the forces of darkness that threaten its economy and its sovereignty. As for compromise, concessions, or the cancellation of the nuclear project, they do not appear in the Iranian lexicon, at least not as it is presented to the public. They are not in the vocabulary of Khamenei, and certainly not in the vocabularies of those people competing for the coveted post of president of the Islamic Republic.

So what can be done to divert the Iranians as they gallop forward on a collision course with the West? By now it is clear that economic pressure and international isolation will not change the mind of whoever is eventually elected to the presidency. That may actually provoke even greater antagonism and entrenchment in anti-Western positions, regardless of whether the winner is Rafsanjani (if he runs), Ghalibaf or even Mohammad Khatami, who is considered the most moderate and pragmatic of the three.

The only real option is to provide them with a respectable escape route that doesn’t look like they are surrendering. The ideal solution would be to announce that from now until the presidential elections and the inauguration of a new Iranian president, the Western nations will lift their sanctions against Iran to foster a friendlier environment between the countries, which is more conducive to negotiations. Only this can create the space needed for considerations that are not based on games of honor or a sense of surrendering to the pressure imposed by the West.

By the way, the most surprising expression of the desire to reduce the tension, the threats and the deeply embedded hostility, and to replace them with a new series of considerations was recently voiced by Rafsanjani. On April 29, he said to several Iranian media outlets: “The Islamic Republic is not in a state of war with Israel." They gave his statement considerable coverage.

As already mentioned, not one of the candidates wants to appear as if he is succumbing to foreign dictates and threats and that he will have no choice but to change course as a result. Not one of the candidates will get up and announce right here and right now that outgoing President Ahmadinejad brought trouble on his people. And it is absolutely certain that not a single one of them will come out against Khamenei, whose seal of religious approval for one candidate or another will ultimately determine their political fate.

But even Rafsanjani, considered as the most extreme, has issued contradictory messages to the West. What the West must do now is internalize the inner workings of Iranian politics and extend a friendly hand to the next president of the Islamic Republic, no matter who it is.

Sanctions can always be reinstated. It will be much harder to put the brakes on the rapid descent into war.