FSA Commander Speaks From Qusair Just Before Its Fall

Just hours before the Syrian army retook control of the town of Qusair, Al-Monitor spoke with an opposition commander about the ongoing battle and Hezbollah’s role in the fighting. 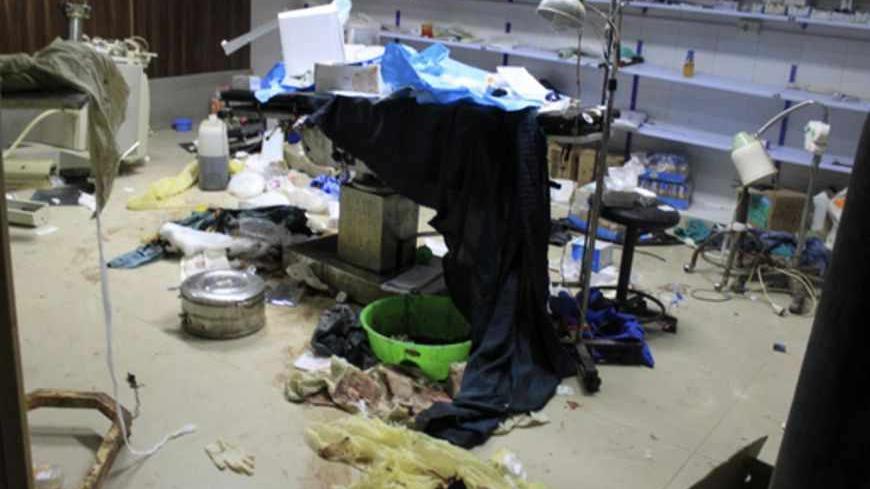 A view of a makeshift hospital which was used by the Free Syrian Army fighters in Qusair, June 6, 2013. - REUTERS/Rami Bleibel

Just hours before the Syrian Army — backed by Hezbollah forces — regained control of the city of Qusair in northern Syria, a Syrian rebel field commander told Al-Monitor about the frantic battle fought by the opposition militants, who were subjected to severe aerial and ground bombing. He also said that withdrawal routes were cut off until Wednesday and Thursday [June 5-6].

Al-Monitor interviewed a military officer in the Free Syrian Army (FSA) who described the situation in the city of Qusair. He said that although the city had been surrounded from all sides, this did not hinder the provision of fighters, supplies and essential medicines through infiltrations or high-risk, targeted operations.

The FSA officer, who spoke on condition of anonymity, said that the full encirclement of Qusair by the Syrian army units had been a military mistake, because it would force the rebels to fight until the last man dies. He added that surrendering was not even an option for opposition fighters, because in this part of the world, it is equivalent to death.

The FSA officer added that the joint forces command directing the Syrian army and Hezbollah units that attacked Qusair for two weeks made a series of grave military mistakes in the early days of the battle. One of these mistakes is that they did not immediately attack the city in order to control it, but attempted to cleanse surrounding sites to secure their backs and supply routes, which prevented them from assuming a superior military position. Days after the launch of the all-out offensive, advancing toward the city became much more difficult for the opposition fighters.

The military commander, who was a high-ranking commander in the Syrian army before he defected, said that the areas controlled by the Syrian army — and its Lebanese ally, Hezbollah, which later became involved in the battle — were almost the same areas it was present in before the attack, namely an area that includes a Political Security Apparatus headquarters. To prove that the city (at the time of the interview) was still outside the grip of the Syrian regime, he said, "It is still being bombarded with long-range missiles. According to military science, these missiles are used to target enemy zones, without the interference of the engaged troops. If [this zone] had a presence of Syrian army and Hezbollah forces, it would been targeted with other weapons."

As for the methods used by the opposition fighters to survive the heavy ground and aerial shelling, he said that two years ago they had begun digging tunnels in red rock, which is easy to cut and break up — unlike firmer white rock.

He added: "There are good bunkers and caches in Qusair. The fighters use them for protection when the bombing intensifies, and resume fighting when calm prevails in streets and neighborhoods that have become belted with both visible and nonvisible barricades. But this does not mean that the rebel fighters are suffering great human losses. Around 20 to 50 people are dying every day, including civilians who have stayed in Qusair, who number 20,000-30,000."

The FSA officer said that a large number of militants operating under his command were tough fighters who have fought several battles across Syria since the outbreak of armed confrontations in March 2011.

He noted that the Hezbollah fighters and Syrian army forces deployed in an almost equal number of fronts around Qusair, but the command of military operations was directed by Hezbollah.

He added: “According to the initial expectations of the Hezbollah military leadership, control over Qusair should have been achieved three days after the attack, after which Hezbollah forces would withdraw to Lebanon and announce that the party was forced to carry out a limited and swift operation. It has been more than two weeks, and their plan has not materialized."

The FSA military commander said: "It is becoming clear to us by the day that Hezbollah excels at defending its territories in south Lebanon, with which it is familiar and where it has its defense installations. However, it is not good at carrying out attack operations, the traditional role of the Israeli army against which it has always fought. It is not on its territory, whereas we're playing a defensive role and fighting on our land after having built bunkers and caches. I can say that the roles are [currently] reversed, which justifies the large number of casualties in the ranks of Hezbollah fighters since the outbreak of the Qusair battle. Do you know that the number of trained Hezbollah fighters who died in the 2006 war with the Israeli army did not exceed 130? I have information that Hezbollah has so far lost more fighters in Qusair alone."

How long can opposition fighters withstand the siege, and field and missile attacks? Before the connection was lost, the officer said: "We have no other choice."

Hours after the conversation, it became clear that the withdrawal option was on the table, and the means and methods of doing so had become available to the opposition fighters and the people of Qusair. When the Syrian army entered the city, the event was covered by the Syrian state television and pro-Syrian regime Lebanese channels (Al-Manar and Al-Mayadeen). Their cameras did not capture a single shot of civilians in devastated and empty Qusair, which looked more like a ghost town.