Lebanon's foremost qanun musician, Imane Homsy, has passed away, leaving behind her a legacy of musical innovation, writes Elie Hajj. 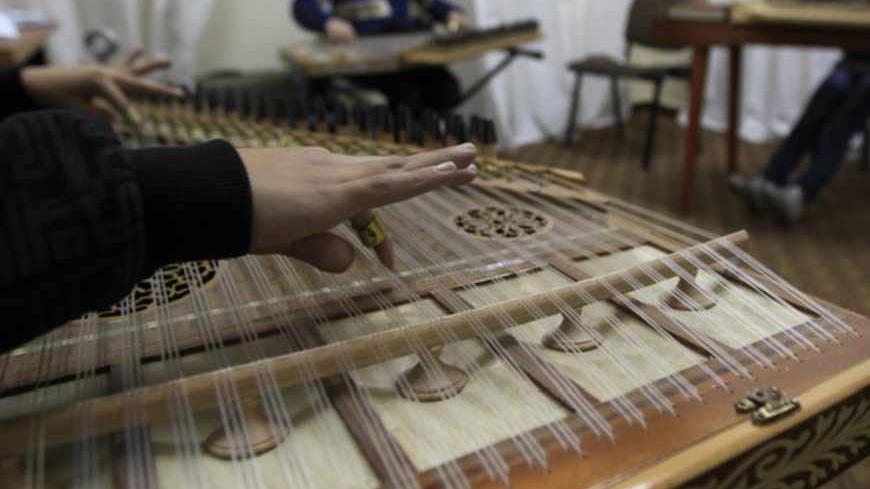 Palestinian children play the qanun, a traditional Middle Eastern instrument, at the only music school in the Gaza Strip, at the headquarters of the Palestinian Red Crescent, on Dec. 11, 2011. - MAHMUD HAMS/AFP/Getty Images

Lebanese musician Imane Homsy created a revolution in playing the qanun, a stringed Arab-Turkish instrument that resembles the guitar. At the pinnacle of her contribution to music, Imane died, taking her talent and refined femininity with her. Her fingers became stiff as illness crept into her bones and stopped them from moving, leaving her no longer able to pluck out the most delicate melodies and heart-wrenching sounds. The image of this woman leaning over her qanun has been engrained in the memories of the Lebanese and Arabs at large, playing the most incredible and technically challenging pieces in innovative ways.

In her early years, Homsy fell victim to her love for this difficult yet alluring musical instrument. While her friends where running around and playing with toys and dolls, she turned the qanun into a game, a friend, a confident and a companion. She spent the greatest part of her time with her strings, experiencing joy and sadness with it, sleeping and traveling with it.

Homsy’s family played a vital role in her musical gift, as they were the greatest motivator in launching her as a small girl on her own path of passion. At the age of 12, Homsy participated as a beginner in a televised art competition in Lebanon, and become an integral part of the same program’s orchestra ten years later.

She chose to specialize in the qanun early on, studying and then graduating from the Higher National Music Institute in 1999. Her passion for music did not stop her from developing profound knowledge in another specialty: engineering, in which she earned a degree. The qanun remained, however, a constant focal point in her life.

Homsy broke away from all its traditions of the qanun, which had usually been played with two fingers. After many attempts and much time spent studying, she was able to create new ways of playing using all ten fingers. With her ingenuity, Homsy bestowed upon the qanun the ability to diversify harmonies and to take on a comprehensive musical role. The astounding artist was preparing to release the details of her technique in an instructional book when she died, leaving the project unfinished.

Imane Homsy's students were consistently the most successful, completing Homsi’s enlightened path. She played as a soloist in a musical ensemble and participated in a number of global arts festivals; however, her greatest dream was to accompany renowned Lebanese songstress Fairouz. She made this dream a reality.

Homsy and Fairouz shared an exceptional spiritual relationship. The instrumentalist delighted each time the grand lady took the stage and serenaded her fans with her angelic voice, which was Homsy's foremost and greatest inspiration. By Fairouz’s voice, feelings of joy and fear were ignited at the same time: joy from participating in such an important concert, and fear from the enormous responsibility this participation entailed. Fairouz then began to take part in Homsy’s concerts, because of the personal relationship that bound them together and the admiration she felt for her skills.

During the last stage of her illness, Homsy finished her treatment and then carried on accompanying artists, holding fast to her belief in music and love for the qanun. During her last months, she prepared to release her second album, which included both new and redone pieces. She passed away, however, on April 17, after a long battle.

Before her passing, Homsy wrote an optimistic letter to her family, saying, “Death is nothing; it is simply moving from one room to another. Do not cry — keep laughing and remember me. Speak about me as if I were with you, and love life.”