Lebanese leaders consider the consequences of Hezbollah's intervention in Syria, including the potential for chaos in Arsal and the Bekaa. 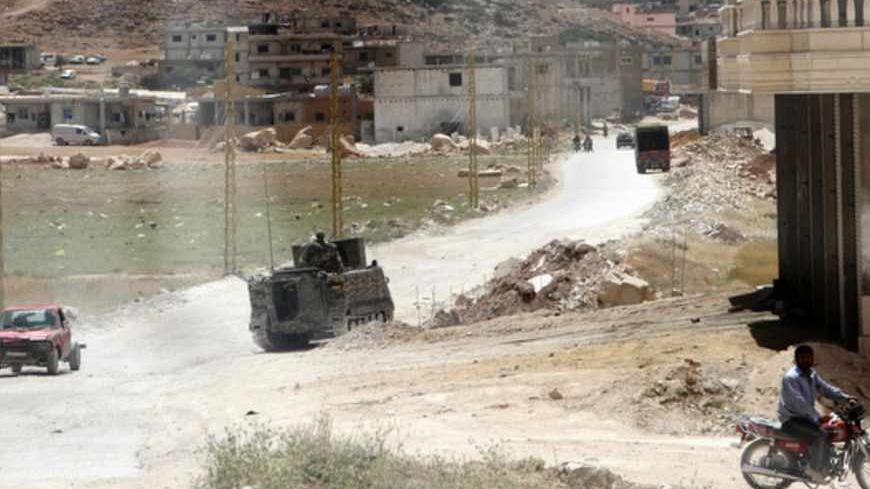 Lebanese Army soldiers patrol Arsal after being deployed to tighten security, following the deaths of two men in clashes near an army checkpoint, June 6, 2013. - REUTERS/Ahmad Shalha

On the sidelines of a special consultative meeting held at his residence last week, the leader of the Lebanese Forces (LF) party, Samir Geagea, posed the question, “Why did Hezbollah fighters manage to make a great difference in the balance of military power, when the party announced its involvement in the fighting in Syria, as evidenced by what happened in the battle of Qusair?”

He went on with his analysis saying that the Syrian regime’s army has more than 450,000 soldiers, 150,000 of whom — according to his information — have been fighting on fronts and facing rebels across most governorates. Geagea also said that the Syrian army has elite unites with high training, experience and good equipment in its ranks. Thus, Hezbollah’s intervention should not be effective to this extent in the course of military confrontations, especially since the party’s troops do not exceed 5,000 soldiers, according to his information.

Given the fact that he led the LF militia during the Lebanese civil war in the 1980s until the early 1990s, Geagea enjoys a lot of political savvy. The Christian leader did not rule out the idea that the participation of the Lebanese Shiite party in the Syrian battles was merely a cover to hide the military actions of the greater Iranian party, which bears the same name and espouses the same ideology in Iran. It should be noted that one cannot distinguish between the Lebanese and Iranian Hezbollah fighters — except when they speak — as the former speak Arabic and the latter, Farsi.

It is clear that the Christian leader was further emphasizing his conviction that Hezbollah is an Iranian party. He accused Hezbollah of prioritizing its broad regional alliances and goals over the best interests of Lebanon and its people. This accusation is at the same time hurled at Hezbollah’s main Lebanese ally, the Free Patriotic Movement, and its leader MP Michel Aoun, Geagea’s historic nemesis.

Accusing Hezbollah of being affiliated with Iran and following its orders has become so common among the party’s opponents in the March 14 coalition. The strange thing, however, is that since it has revealed its involvement in the Syrian military confrontations, the Shiite party no longer takes the trouble to refute such claims.

On the other hand, a high-level official in the Lebanese state offers another explanation for the new course of military events in Syria after Hezbollah’s intervention. In his opinion, the Syrian army has become drained, after having fought continuous gruesome battles across all of Syria over the past two years and three months. The army has been also deeply affected by the deep divides within its ranks, not to mention the many defections of soldiers and officers to the opposition’s ranks.

This reality has been reflected in the army’s performance on the ground. The prominent Lebanese figure added that one should not forget that over the past decades, the Syrian regime has neglected the establishment of a strong trained force, adequately equipped to fight fierce wars, on the basis that the army’s sole mission was to protect the regime, which did not necessitate more than a harsh security performance at home and efficient intelligence services that would raise fear in the hearts of those tempted to oppose the regime.

Moreover, according to the same Lebanese official, throughout the 30 years of Syrian tutelage in Lebanon, Lebanese people noticed that the army was poorly equipped. He also argued that during the Syrian crisis, the Syrian army has been resorting to methods of elimination and total destruction, whether against individuals or groups. The regime has been heavily bombing Syrian territories in order to wreak havoc on the entire country and cause grave human damage in the ranks of those rising against it, smashing their morale, along the lines of the former Soviet military model.

The Lebanese official believes that during the Qusair battle the Free Syrian Army and the Islamist militants of Jabhat al-Nusra and other groups showed great courage, especially since they had built fortifications in anticipation of aerial bombings. However, as was the case with the Syrian regime, they lacked proper equipment, proper training and combat experience gained throughout the years. Thus, rebels are not much better than the Syrian army they are fighting against.

Nevertheless, what truly concerns the Lebanese official is what would happen on the Lebanese territories should the information that Hezbollah is preparing to launch a large-scale attack in the region north of the Beirut-Damascus road inside the Syrian border all the way to Qusair prove to be true. It has been said that Hezbollah has been planning to purge the area of Syrian rebels, who have been controlling the outskirts of this area, where it is impossible for the Lebanese army to impose order.

He also said that this potential attack is likely to be launched from the Lebanese town of Nabi Sheet in the Bekaa Valley. This means that the first confrontations could occur in the towns of Serghaya and Yabrood on the Syrian side, in order to control the border, which stretches over 80 kilometers (49.7 miles) in this region. This borderline is surrounded by the Syrian army from the east side. The regime’s army has managed to reclaim the Damascus road after regaining control over Qusair. The Sunni Lebanese town of Arsal is located on the west side. This border town is sympathetic toward the Future Movement, as well as some Islamic movements and associations that are greatly hostile toward the Syrian regime and Hezbollah.

The Lebanese official as well as many anti-Hezbollah officials, in general, fear that a state of total chaos would prevail over the Bekaa Valley should Hezbollah attack the Syrian rebels’ strongholds. The town of Arsal has been receiving great numbers of displaced Syrian refugees, who oppose the regime and whose numbers amount today to 60,000.

Many expect that the people of Arsal would join hands with the Syrian rebels to fight against Hezbollah’s militants on the outskirts of their town. During the Lebanese civil war, the people of Arsal were known for sending their own sons to fight alongside leftist groups and Islamist fighters, as they adhere to their dogma of exacting revenge, as is the case with Hezbollah’s tribes in the surrounding areas, which espouse the same belief.

Therefore, whenever senior officials in Lebanon hear news about kidnapping or murder in Arsal, they fear the worst.