Israel's national security leaders struggle with predicting the future of the region. 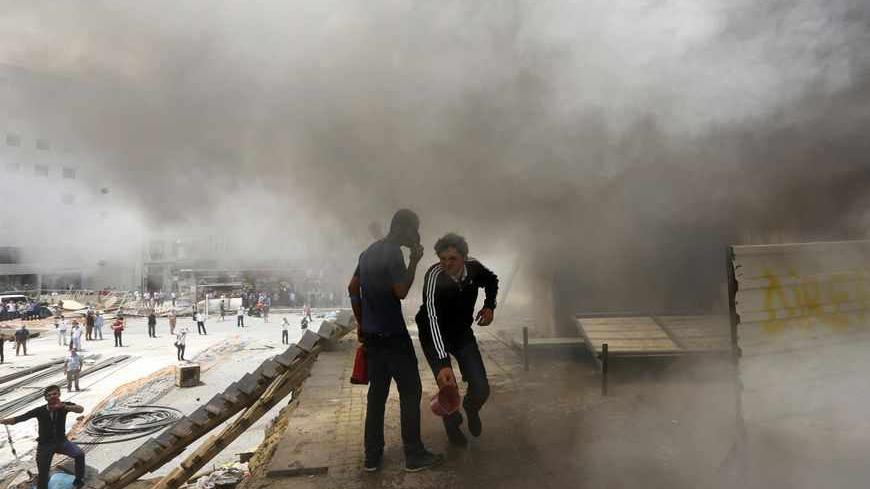 Anti-government protesters try to extinguish a burning container in Istanbul's Taksim Square, June 4, 2013. It was not clear why the container was on fire. - REUTERS/Yannis Behrakis

No one in the Israeli establishment expects the destabilization of Recep Tayyip Erdogan's regime in Turkey. True, there may be weak glimmers of secret hopes and dreams, but the Israeli system — the diplomatic and defense establishments as one — tries to maintain a strong grip on reality, and it knows that Turkish Prime Minister Recep Tayyip Erdogan is still powerful and enjoys the fidelity of most of Turkey's public. It will take time until his grip on government institutions and sources of power will truly deteriorate. "What is happening there now," says a diplomatic Israeli source, "is not expected to undermine Erdogan's rule, but can definitely rock his self-confidence."

This assessment should not be belittled, because many people feel that Erdogan's self-confidence is the evil root in his dealings with his surroundings in general, and Israel in specific. Erdogan's growing appetite has become truly swinish and planted in him the messianic belief that he was sent directly by the Divine Presence to return Turkey to its days of glory and rebuild the Ottoman Empire. This was viewed by many as the main source of Erdogan's megalomania that is now absorbing a strong, unexpected blow from the masses in Istanbul's squares, who call him "tyrant" and "dictator." Until only recently, Erdogan used exactly these same epithets for his eastern neighbor, Syrian President Bashar al-Assad. It is truly a small world.

According to Israeli evaluation bodies, the protest in Istanbul's Taksim Square will not resemble the developments in Cairo's Tahrir Square (a process that is still unfolding, and far from its finish line), nor to what took place in other sites of the Arab world. According to current analyses of Israeli sources, the Taksim Square protest actually bears more similarity to the tent protest in Tel Aviv's Rothschild Boulevard in the summer of 2011, a protest that, at its height, drew half a million Israelis to the squares. (In relative terms, half a million Israelis is equivalent to 5 million Turks on the streets.) The protest in Israel did not bring down the government but it undermined it and led to the fact that in the ensuing elections, Prime Minister Benjamin Netanyahu lost a significant proportion of his power.

The Israeli protest also created something else: a process in which the masses take increasing political power into their own hands, thus terrifying the politicians. A tangible example of this can be viewed in the fact that the Israeli government is very wary of making a decision regarding the percentages of natural gas to earmark for export, in regard to the gas that was discovered in the bowels of the Mediterranean Sea, fearing a harsh reaction of the street. Protest activists demonstrate every week near the home of the appointed minister (Energy and Water Resources Minister Silvan Shalom). The web roils with protest, the press provides [the protesters with] a tailwind, and the government trembles with fear.

All this is what may now happen in Turkey. Until about 15 minutes ago, Erdogan was convinced that he is an omnipotent ruler who, if he so desires, can anoint himself king or declare that the sun rises in the south, and expect it to fall in line. But from this moment onward, nothing can be taken for granted. The riots in Turkey can die out in the course of the week, or they can intensify to become a real civil war (should Erdogan make good on his threat to dispatch a million pro-regime defenders against the protesters). But one thing is already clear: Before his next caprice, Erdogan will think twice. Everything that had been easy until today, will be difficult. Including the coming elections.

This is the way all the strongholds fall in the Middle East. Egypt is in chaos, its economy is falling apart, the masses are sizzling, Morsi is finding it difficult to stabilize his regime. Syria burns, Lebanon is torn into shreds. Even in Israel the central regime is weakened, the political map is not stable, the electorate raises and fells new princes every other day. We haven't even talked about Iraq, in which deadly terror continues unabated, or Iran, preparing for pseudo-democratic elections and an American-Israeli assault in the fall. Nothing is the way it used to be. Everything that had been stable, clear and tranquil, collapses and disappears. The isolated oases of stability that still hang on are the kingdoms. The king in Morocco is stable, the regime in Saudi Arabia retains its power, even the Jordanian king is still with us, somehow. It turns out that Arab nations have a basic respect for proven historical dynastic regimes. So far, anyway.

On the background of this turmoil, Israeli Defense Minister Moshe (Bogie) Ya'alon appeared this week before the complete forum of the Knesset's Foreign Affairs and Defense Committee. Ya'alon gave an extensive regional survey, focused on Syria and Lebanon and, without saying so expressly, indirectly communicated Israel's basic quandary: The truth is that no one in Israel has a clue as to where the region is heading and what will transpire tomorrow morning. Where, oh where, are the good old days, when the army's Intelligence Branch knew of every move, movement or thought of every Arab ruler at every given moment. Most of the traditional Arab rulers are no longer with us and nothing can be predicted any more, as proved now in Turkey as well.

On this background, question marks arise regarding American intentions of creating a regional Sunni alliance here, with Israeli backing, vis-à-vis the Shiite threat. Secretary of State John Kerry, expected to arrive next week to the region (June 8), will soon learn from personal experience that the shifting sands in our area make it near impossible to erect fences and create alliances. The turmoil is not only religious, but also ethnic and tribal in nature. Minister Ya'alon told the members of the committee that Assad still rules over about 40% of Syrian land, but he forgot to mention that this concerns the high-quality territory of Syria, including Damascus and its environs, the corridor to the north and to the northern coastal towns. Ya'alon said that Hezbollah is up to its neck in the Syrian imbroglio that is spilling over into Lebanon too, and that Hezbollah dispatches its highest-quality fighters to Assad's aid. Ya'alon clarified that S-300 missile batteries are not expected to reach Syria in the coming year.

What Ya'alon did not expressly say is that in the free-for-all war being waged now to Israel's north, Israel wishes great success to both sides. Exactly like the wishes sent by former Prime Minister Menachem Begin in his time, to the warring sides in the Iran-Iraq war. When the dust settles and visibility returns, then we will think about what to do next.