Has Erdogan Overstayed His Welcome?

Most countries set term limits for top officials to avoid antagonizing the population and to inject new energy into government; Turkey should do the same. 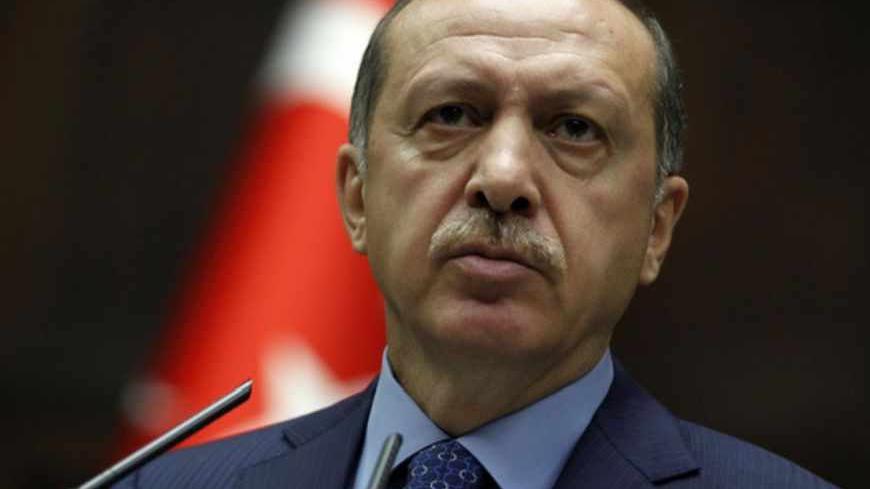 Turkey's Prime Minister Tayyip Erdogan addresses MPs from his ruling Justice and Development Party during a meeting at the Turkish parliament in Ankara, May 7, 2013. - REUTERS/Umit Bektas

In Washington last month (May 17), Turkish Prime Minister Recep Tayyip Erdogan lectured an audience of academics, diplomats and journalists about the consequences of failing to alleviate the suffering of innocents in Syria, Somalia, Palestine, Darfur and Myanmar.

“Where this is no justice, there is no humanity,” Erdogan said. “People who are looking for their own peace in the pain of others are not human beings.”

Quick to criticize others, the Turkish leader has been surprised by the sudden outburst of protests against him at home, where he has shown scant empathy for the pain of countrymen bombarded with tear gas and water cannons. Erdogan’s tone-deaf response to the demonstrations in Istanbul and other major cities — blaming hooligans, opposition political parties and even foreigners — suggests that he has forgotten a cardinal rule of politics: There is a limit to how long you can stay in office and remain popular.

The great American founding father, Benjamin Franklin, famously said that fish and house guests begin to smell after three days. In politics, the equivalent appears to be two terms in elected office.

The first US president, George Washington, retired to his farm in Virginia after two terms. In US history, only Franklin Delano Roosevelt exceeded that tenure under the extraordinary circumstances of the Great Depression and World War II. The 22nd Amendment to the US Constitution, passed after FDR’s death, made sure that term limits would remain in force.

In Turkey, Erdogan is now two years into his third term as prime minister but is seeking another decade at the pinnacle of government. Erdogan wants to revise Turkey’s constitution to create a powerful executive presidency — a job that he hopes to win in the 2014 elections and to hold until 2023. Given the increasing authoritarianism he has shown in recent years, doubling his tenure at the top would be worrisome.

Erdogan is justifiably proud of the progress Turkey has made since the Justice and Development Party came to power in 2002. On his watch, as he was quick to point out in Washington, Turkish economic output has tripled and its hard-currency reserves have grown from less than $30 billion to $135 billion. Foreigners drawn by Turkey’s unmatched historical sites, cuisine, crafts and hospitality have turned the country into one of the most popular tourist destinations in the world.

But while Erdogan’s rise from the back streets of Istanbul was inspiring and Turkey’s economic growth is a source of envy in the region, the prime minister’s neo-Ottoman chauvinism and lack of tolerance for those with differing views are increasingly grating.

Judging from his public comments in Washington, Erdogan is stingy in his sympathies, both in domestic terms and in foreign policy. He feels the pain of fellow devout Muslims — note the list of countries whose suffering he cited — but has little interest in others who are also victims of political violence and poor governance.

His apparent inability to relate to more than one side in regional conflicts has undercut Turkey’s chances to be a successful mediator in the Israeli-Palestinian crisis and the civil war in Syria. Meanwhile, his government’s expanding efforts to impose a conservative Muslim lifestyle on Turkey have antagonized millions of Turks who believe that what they wear and drink and how many children they have are their own decisions. A harsh crackdown on the press has compounded this frustration.

Even if Erdogan had been less overbearing, however, many Turks would likely have tired of him by now.

A key lesson of the uprisings that have hit so many countries in recent decades — from Eastern Europe through North Africa and the Arab world — is that leaders who refuse to relinquish power are likely to be forced to do so.

Former Egyptian President Hosni Mubarak might well be living out a quiet retirement in Sharm el-Sheikh had he not entertained the notion of running for a record sixth term in office. The same "pharoahitis" infected his now deposed colleagues in Tunisia, Libya and Yemen.

Even non-democratic countries have recognized the value of term limits. Chinese presidents and party secretaries step down after 10 years to promote younger leaders and avoid creating another cult of personality that was so damaging to the country under Mao.

Russia also limits its presidents to two consecutive terms but allows another two terms after a period out of the presidency. Not surprisingly, President Vladimir Putin — who was prime minister while Dmitri Medvedev was president and has now returned to what he hopes will be his second prolonged period as president — is far less popular now than he was a decade ago.

Even Iran, whose bifurcated system is hardly democratic in a Western sense, limits its presidents to two consecutive terms and one additional term after a period out of office. While Supreme Leader Ayatollah Ali Khamenei, remains on top, the president influences government policies, and the election process provides an outlet for public participation and criticism.

Since the Arab uprisings began, Erdogan has been touting the “Turkish model” for its melding of Islam, modernity, economic development and democracy. In Washington last month, Erdogan said that Arabs did not have to copy Turkey’s system but that it could be a “source of inspiration” to those emerging from authoritarian rule.

If Turkey really wants to inspire — and Erdogan to seal his own positive legacy in Turkish history — he should begin to plan now to leave the stage gracefully when his current terms end in 2015.