Pinar Tremblay says the spat about alcohol consumption in Turkey may mask a more serious debate about fundamental rights in Turkey. 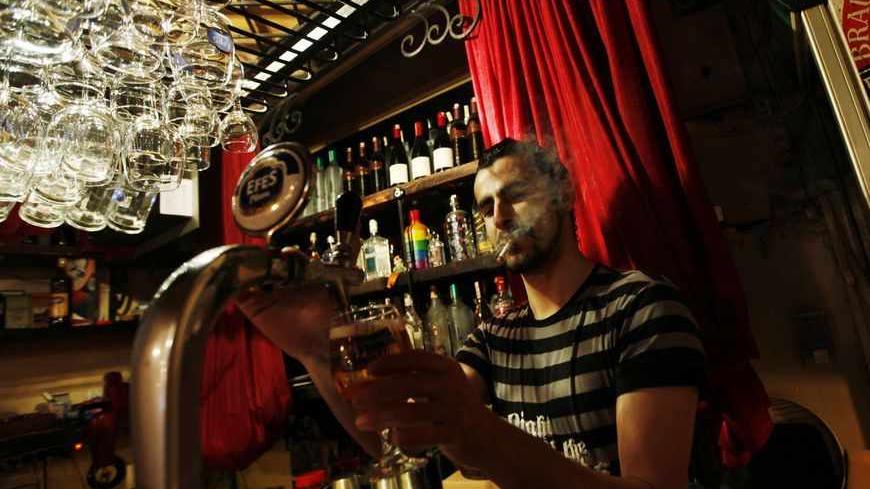 Turkish Prime Minister Erdogan, speaking at a Global Alcohol Policies Symposium on April 26, said beer was forced upon the masses as a means of “modernization’’ in the early years of the republic. Actually, the first beer factory in Turkey was state-owned and produced what was known as Tekel Birasi, (Monopoly Beer). “But beer is not our drink” he added. “Indeed, our national drink is ayran (yogurt drink).’’ This created uproar in social media, mostly among white Turks (traditional elite, well-educated and Kemalist upper class). Erdogan has mastered the game of touching the nerves of angry white Turks and alcohol presents a delightfully contested zone.

Is there anything to learn from this specific case?

1. Beer not “modern” or “foreign” to the Middle East. Beer has never been a “national” drink in Turkey. That is probably why you have not seen Turkish beer in any well-stocked store around the world. Indeed, initially Erdogan’s statement reminds one of Egyptian Ikhwan’s (Muslim Brotherhood) struggles to limit the consumption of alcohol. Beer was brewed in ancient Egypt. Their most famous brand, Stella, is three decades older than Ikhwan. How will Egyptian Ikhwan take on beer has been a question in the press. Beer, raki (an anise-based, ouzo-like Turkish spirit), wine and other kinds of alcohol have been brewed long before the end of Ottoman era. Yet, these spirits have no place in the neo-Ottoman culture.

2. In the name of Islam or public good? The AK Party claims to be vanguards of an advanced democracy that supports advancement of civil rights and liberties. “More issues can be spoken freely now” is the unchallenged motto of AK Party supporters. One very prominent of such battles on the borders of civil liberties has been about the headscarf. Almost all liberals, conservative Muslims, and other minorities in Turkey have supported the right of women to wear head scarves in public spaces. Yet, hijab wars continue.

Not many Muslim voices are heard about other Islamic requirements. While it's sunnah (accepted practice) to grow a beard for men, beards are banned for Turkish public employees — with a few exceptions. Not many Muslim men in Turkey complain about this. Many of the Islamic rules and regulations are not even in public debate, such as riba (charging and collecting interest), or polygamy, or observing Friday as a holy day. State colleges have classes during Friday prayers. As nargilah (hookah/shisha) places mushroom all over Turkey and are quite popular with AK Party base (mostly men but also women), so far Erdogan has not blasted the health risks of nargilah.

Now, let’s consider reciprocity. How many devout Muslims have spoken “for the freedom to consume alcohol”? Being all for restrictions on drinking age and strict penalties for drunk driving, have you heard an Islamist pundit say: “This is unfair; alcohol prices are through the roof, there are fewer restaurants serving alcohol, and it's none of the prime minister’s business to tell people what to drink.” It's worth noting that alcoholism is not an issue in Turkey. The country ranks second to lowest amongst 53 countries in alcohol consumption according to the World Health Organization's “European Status Report on Alcohol and Health 2010.” Only 6% of Turkish households consumed alcohol in 2008. Not sure if any of these statistics explain the relentless infatuation of AK Party over anything related to alcohol.

Hence, it's quite baffling to see the periodic public outbursts of AK Party bigwigs, particularly Erdogan, about the evils of alcohol. In the “advanced” democracy of neo-Ottoman style thereby, some freedoms rank higher than all other freedoms. The AK Party has made it clear that it will not ban alcohol. It is another favor granted to a shrinking minority in Turkey.

The civil liberties’ battles are about boundaries. In Turkey, no one can be sure what is acceptable, what is lawful, what is a crime (hence harmful to the society) to be punished by law when it comes to freedom of speech and expression. The norms change according to the whims of the leaders. This feeds further into fear, and self-enforced censorship in all forms of individual expression. Hence, it is a constant witchhunt: Just who is tangled up in the web is different.

One day it may be the Nobel-prize winning author, Orhan Pamuk, charged and convicted of “insulting Turkishness,” the next day it's Ahmet Altan, a prominent journalist, sued for libel for calling Erdogan “arrogant, uninformed, and uninterested.” What is the rhyme or reason for offending others? What are the criteria the courts use to charge and convict? Parliamentarian Huseyin Celik has been given a pat on the back for saying, “What are we to do if 3-5 Mehmetcik died?” (referring to young army conscripts, not professional soldiers). Celik’s statements about the dead conscripts must have offended some Turks, but Celik has not resigned or apologized. Not surprisingly, he has not been charged.

It's open secret that the defamation laws are utilized to punish political opposition. Almost anything government officials say can be further explained and justified by “pro-government” media, yet if you are speaking without AK Party’s blessings, your future remains cloudy with a chance of legal drama.

So, yes, there is freedom of expression in Turkey if you are expressing yourself within the finely tuned boundaries of political leadership, just like there is no ban on alcohol and you can wear the head scarves and a beard. Yet, all these “freedoms” are at the mercy of the government, are almost bestowed upon citizens as favors, not inalienable rights. As a superb master of using the judiciary to expand and extend political power, the AK Party deserves utmost kudos. Dissent in no way can be seen as patriotic. It is AK Party authoritarianism with Erdogan’s stern, paternalistic lectures, with a dose of “moderate” Islam sprinkled on top, for Turks.

Each outburst about civil rights and liberties is dealt with separately and forgotten promptly. Trivial religious rhetoric does the magic for Erdogan to comfort the devout and numb the nerves of angry white Turks. With all the smoke screen generated around odd outbursts of ayran, infidels and Turkishness, the majority forget to ask the dreaded question: What are my inalienable rights on Turkish soil?