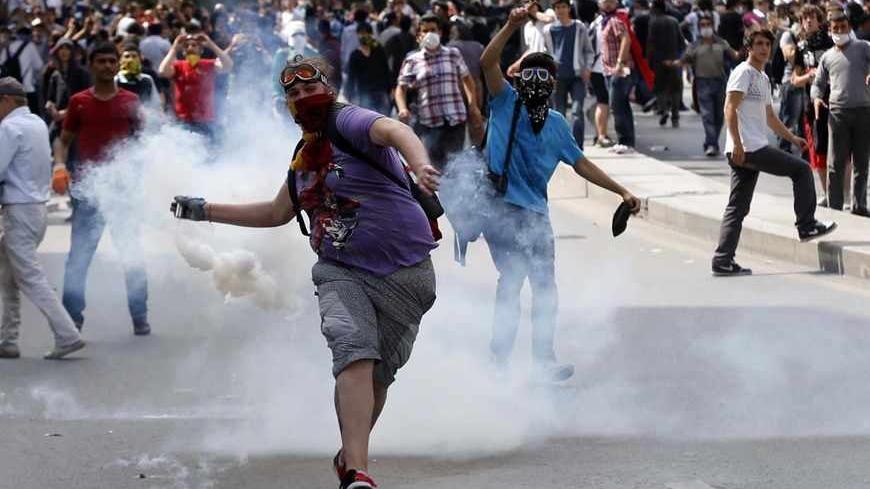 A protester throws a gas canister back at the riot police during a demonstration in Ankara, June 3, 2013. - REUTERS/Umit Bektas

Although the ongoing street protests in Turkey cannot and should not be considered as being the same as the developments in some Arab countries rocked by popular uprisings, Turkish Prime Minister Recep Tayyip Erdogan provided a most-unexpected comparison on Monday.

Just like Syrian President Bashar al-Assad, who initially blamed foreign intelligence services as being behind the protests in Syria, Erdogan, too, accused foreign agents of supporting the ongoing protests asking for his resignation.

“Our intelligence work is ongoing [to determine the foreign actors behind the protests],” Erdogan said before departing for Morocco on Monday. “It’s not possible to reveal their names. But we will have meetings with their bosses.”

This suggests once again that Erdogan does not really get it. He continues to play the tough guy, and blames the opposition or, now, foreign agents for being responsible for the protests on the streets, as if he has had no role to play in them. Or, in other words, you are with me or against me — as if the protesters are the enemy.

I explained in “Erdogan weakened by protests” and “Turks Rally Against Erdogan Rule” what really triggered these massive demonstrations on Turkey’s streets.  Erdogan’s accusation of foreign agents is disappointing, even by what we have come to expect these days in Turkey.  While one can consider Erdogan's rhetoric addressing these demonstrations as a blatant provocation triggering the further escalation of the unrest, provocateurs could also alter the protests for the worse. The majority of protesters are against vandalizing public or private property. None applauded the news that a masked group put the AKP [Erdogan's Justice and Development Party] building in Izmir on fire. The protesters on the street just want to make a statement to the prime minister that he is acting as if they don’t exist, and to remind him that they do.

These people on the streets are not politically organized. Many of those I chat with on the streets of Ankara also slam the opposition parties for their inability to govern. There was growing tension in the capital on Monday, the first work day since the demonstrations in Istanbul spread to Ankara and other cities on Friday. The roads to the prime minister’s offices were all blocked and  police did not allow anyone to go through. Public transportation as well as the rest of the traffic had to alter their routes. One pedestrian told me, “They’re afraid of their own shadows.” There were also others, though, supporters of Erdogan, who stayed distant, but made their body language seen. Both sides are somehow in shock in trying to comprehend what is really going on. And police continued their brutal crackdown.

A huge amount of pepper and tear gas was sprayed on people, in addition to vast  streams of water sprayed by water cannons to disperse the crowds. Around midday Monday, high school students gathered in downtown Ankara in protest of the government. The police intervention was intense. It looks like it won’t be the last, as it appears these protests will be continuing a little longer. The more they continue, however, the government risks their taking a much more violent turn. A doctor friend told me that there were a handful of protesters who were urgently taken into surgery due to brain trauma and remain in critical condition. There are thousands injured, and an equal number arrested. It’s an absolute mess.

Turkish President Abdullah Gul met Monday with Kemal Kilicdaroglu, the main opposition party Republican People’s Party (CHP) leader, at Kilicdaroglu’s request. “The prime minister’s rhetoric is not helping to de-escalate the situation,” he said, drawing attention to the excessive use of force. “We have to first accept that there is excessive use of force. I told the president that he has powers.” In other words, Kilicdaroglu appealed for help to Gul to intervene and help calm the streets.

No one needs to be an Einstein to understand that if this tension continues on the streets, this will turn more violent. No one also needs to ignore that if the demonstrations continue, people need to channel this social movement into a political activity. Things are not there yet, but Erdogan’s harsh rhetoric may push people in such a direction. And it’s all unprecedented what might follow next.

European diplomats are also on the streets, closely observing and witnessing the events. The reason is simple — to find out for themselves what is happening.

It’s a shame that the broadcast media covered Erdogan’s speeches from beginning to end, but not the protests. Thousands gathered in front of NTV, Turkey’s first news channel, to protest its nonexistent coverage of the demonstrations. And the European diplomats are basically making sure by quietly attending these demonstrations that they can witness what the police and demonstrators are actually doing on the streets. “We call for restraint from the security forces," a European diplomat told Al-Monitor. "We will, however, wait for the coming days to see how these events evolve. Our statements may change based on these developments, such as if there is a casualty.”

Erdogan might do well for the nation if he starts considering his own role in all of this. As the night sinks in while I write this article for the fourth night in a row, people again came out in Ankara’s suburbs banging their pots and pans and honking their cars. There is an outpouring of reaction against the AKP government, and this must have a meaning beyond blaming the opposition or foreign agents.

Tulin Daloglu is a contributor to Al-Monitor's Turkey Pulse. She has also written extensively for various Turkish and American publications, including The New York Times, International Herald Tribune, The Middle East Times, Foreign Policy, The Daily Star (Lebanon) and the SAIS Turkey Analyst Report. On Twitter:@TurkeyPulse