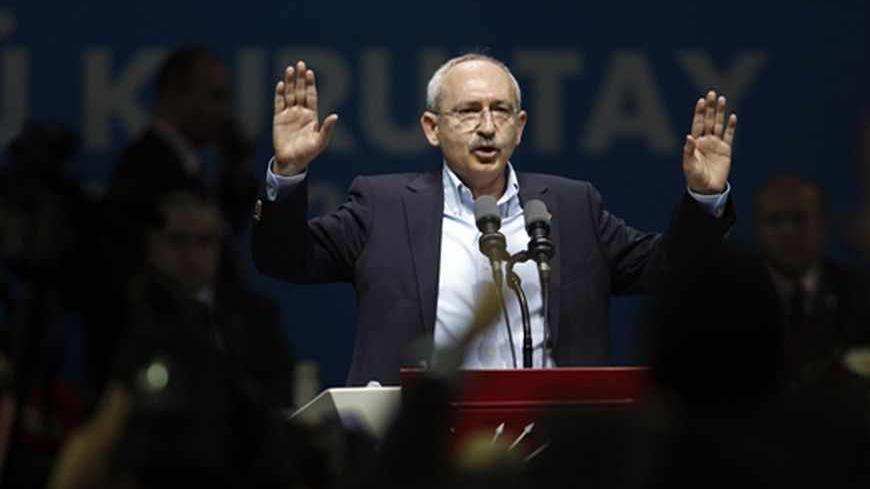 Is it really that wrong for Kemal Kilicdaroglu, main opposition Republican People’s Party (CHP) leader, to travel to hot spots such as Iraq and Egypt? Kilicdaroglu visited Baghdad last month, and will be traveling to Cairo next week. Not that I would argue that these were necessary or timely visits to these troubled capitals, but it is also near impossible to dismiss the perception of the ruling Justice and Development Party (AKP) about Kilicdaroglu’s engagement in these countries, as if it is somehow equal to treason. The growing polarization between the political camps in this country, unfortunately, knows no limits and now attacks its opposition members' engagement with foreign capitals at a cost of hurting Turkey even more.

Turkish Prime Minister Recep Tayyip Erdogan, for example, takes an insulting tone in somehow criticizing CHP’s foreign engagement attempts and stops himself from thinking whether there could be any benefit to Turkey from such contacts. “I attach importance to CHP’s travel to [Egypt.] And I also attach importance to it due to its approach to democracy, and its experience with military coups,” Erdogan said on Sept. 4.

“They’re not satisfied with their experiences in Turkey. They are now trying to learn something from others who have experienced military coups, or they will try to export their experiences.” He added, “This is how I consider their visit [to Egypt]. The CHP members traveling to Iraq or Egypt have nothing to offer to these countries. If anything, they can learn something from them. Or they could share with the Egyptian administration the fact that ‘we also staged a similar coup and supported them. We know military coups and civilian coups.’”

Deputy Prime Minister Bekir Bozdag has also been vocally critical of CHP’s engagement in these countries. “We have a saying: A hajji meets another hajji in Mecca, dervishes meet in the dervish lodge.’ In light of that, the ones who support military coups meet in Cairo. I am curious what Kilicdaroglu and his entourage will talk about when they get there. We know that the CHP has supported all the previous military coups in Turkey. We know that they have experience in legitimizing coups. So, in that regard, will they share their experience in legitimizing an illegitimate coup with the Egyptians, or will they take a lesson from them? It’s really not clear to us whether they will get their advice by saying, ‘We can’t be the winner at the ballot box. We can’t come to power through elections. You have accomplished it somehow. You have some sort of experience, could you show us the way?’”

Bozdag claimed that Kilicdaroglu’s visit will mean support for Egyptian Gen. Abdel Fattah al-Sisi's coup. “CHP’s visit will strengthen the coup-makers, Sisi and his team. The CHP will help to legitimize this illegitimate Egyptian government,” he said. Separately, Bozdag also tweeted the following: “CHP is engaging in talks with all those countries that Turkey has a problem with, sidelining the country’s interests.”

Now this is very interesting. First of all, it is a different thing to oppose the military coup in Egypt and equate it to mean standing against Turkey’s interests. The government needs to explain how a military coup in Egypt hurts Turkish interests. If Erdogan is sincere in considering the toppled Egyptian leader Hosni Mubarak as a dictator who caused more harm than good to his own people, then why is the military coup different in impacting Turkey’s interests? Could it really be all about supporting the Muslim Brotherhood, and therefore Islamists coming to power, which matters for the Erdogan government? Or is this only about Turkey's potential loss in its trade and business investment in that country?

And it is even more troubling to follow the AKP mind-set when it comes to defying all international criticism of the government’s full-force clampdown against the people during the Gezi Park protests. It is a fact that European countries also raised an eyebrow at the excessive use of force by the Turkish police and the government’s orders encouraging such rules of engagement with civilian protesters. While it is a given that criticism will find its way into Turkey’s European Union progress report, the European governments seem to have decided to keep — at the least — public criticism limited as they need to continue the state-to-state relationship between the elected governments and therefore the AKP. So, how far could they really strain the relations? Or did the European governments — in the AKP’s perception — fail to teach them a lesson?

Egemen Bagis, the minister in charge of advancing Turkey’s EU full accession negotiations, disregards all these complexities and continues with his party line. “Burning with the desire of conducting a military coup, the CHP is heading to Egypt to brainstorm with its soul twin. It would be best that they don’t forget to close the door when they leave,” he said on Sept. 4. “While the CHP has all the world’s experience in staging a coup, it’s all very interesting that they still go to Syria, Iraq and now Egypt to discuss these matters. After petting on [Syrian President Bashar al-] Assad’s back, they headed to conquer Iraq but they could not leave Baghdad [for their scheduled meetings in Erbil and Najaf due to security concerns], and now they are going to be Sisi’s guests. That’s what the CHP’s perception of democracy is.”

CHP Deputy Chairman Gursel Tekin responded to these criticisms by saying, “If you have reached a point of not making a visit to a country, you need to question yourself. You withdrew our ambassador, and why send him back now? One needs to think first before taking a step forward. What happened to your bullying? You can’t run foreign policy by taking your brothers on vacation. You went on vacation with Assad, conducted a joint council of ministers meeting. You have reached this point [of seeking an international military operation to oust him from power]. The CHP can correct all these mistakes.”

Is it really possible to undo this unbalanced take on regional countries all at once? Possibly not, but it would be best for the ruling party or whoever comes to power in the next election to take a calmer approach in engaging with foreign countries and make it a manageable relationship at all times, whether there happen to be like-minded leaders governing those countries or not. That is what diplomacy actually means. And today it is difficult to talk about any diplomatic success in general.