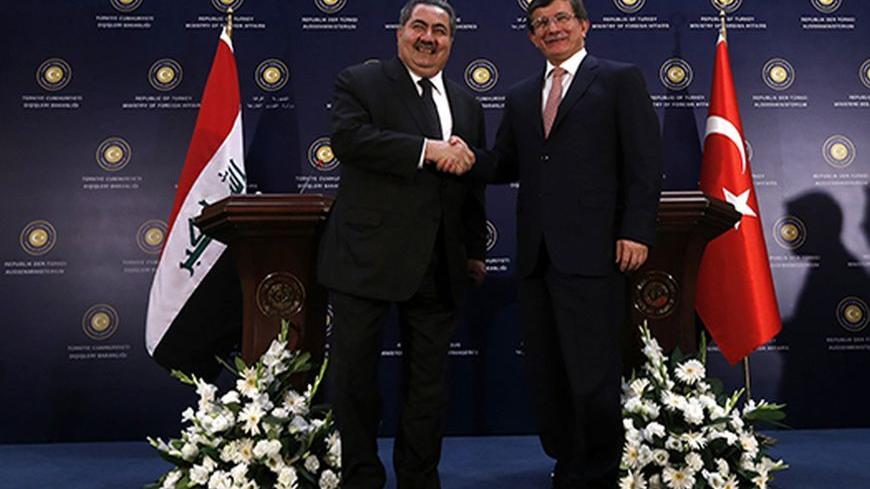 Taking this as the principled guideline, though, it could be difficult to make sense of the ruling Justice and Development Party (AKP)’s harsh criticism of the main opposition Republican People’s Party leader Kemal Kilicdaroglu’s visit to Baghdad in August — almost with a tone of equating it to treason.

In that light, Zebari’s visit to Ankara, and Davutoglu’s announcement that he will be traveling to Baghdad in the first half of November may suggest the following:

Turkey is trying to adjust its approach to its neighbors, and attempting to renew its close cooperation and dialogue. But with Davutoglu in charge, these efforts may not go deep enough to resolve the real issues, such as addressing complaints that Turkey is meddling in the domestic affairs of its neighbors.

Tensions between these two countries have reached the point of a worrying absence of dialogue, such as when Turkey granted refuge to Tariq al-Hashimi, a vice president of Iraq and a prominent Sunni leader, in February when a court held him responsible for paramilitary death squads carrying out hundreds of attacks on political opponents, security officials and religious pilgrims over a period of six years. Iraqi Prime Minister Nouri al-Maliki interpreted Ankara’s decision as a direct intervention in his country’s domestic affairs, and an infringement of the Iraqi legal system. Ankara also angered Maliki when it signed an oil agreement with the Iraqi Kurdistan Regional Government without the consent of the central government in Baghdad.

Maliki, in fact, went as far as describing Turkey as a “country turning into an enemy,” which received a sharp warning in return from Erdogan urging Maliki to refrain from sectarianism and “not to follow in the footsteps of Yazidi [the founder of the Yazidi sect that broke away from Islam and was persecuted].”

These two countries also differ in their approach to the handling of the Syrian civil war, and Iran’s role in Syria. While there were other smaller issues between Turkey and Iraq besides these issues, the relationship nevertheless had stalled the past two years. Zebari’s visit to Ankara only became possible after two other meetings took place. First, Iraqi parliament Speaker Osama al-Nujaifi met with his Turkish counterpart Cemil Cicek in the Turkish capital in September; this was followed by the Oct. 22 visit to Baghdad of AKP deputy Volkan Bozkir for high-level meetings. Bozkir also heads the Foreign Affairs Committee of the Turkish parliament.

Kilicdaroglu’s visit aimed at retaining ties with the Iraqi central government, no matter how bad the state of dialogue between the elected representatives of the two sides might be. Put simply, AKP moved closer today to CHP’s position favoring the renewal of political and diplomatic ties with the Bagdad government; Erdogan’s invitation to Maliki to visit Turkey is a good sign of this. But would not it be more beneficial for Turkey if the Erdogan machine were to be able to keep some civility in their criticism of CHP members’ travel to foreign countries to advance Turkey’s interests?

Since Kilicdaroglu’s visit to Iraq, two things became clear. Despite the Syrian regime’s alleged chemical weapons attack on Aug. 21, the United States bailed out at the last minute from carrying out a military strike to punish Syrian President Bashar al-Assad for this crime against humanity. Second, the United States and Iran started to engage in direct dialogue allowing room for realistic optimism about a peaceful resolution of the Islamic Republic’s nuclear dossier.

In other words, Davutoglu’s policies have not shown that Turkey has become a big enough regional player to shape the region’s developments, despite the AKP’s arguments to the contrary. Indeed, Turkey still remains a vulnerable country in its immediate neighborhood as it tries to preserve its national interests and keep the peace at home. It can even be said that to maintain the security of its citizens, Turkey actually has to rely on its troubled neighbors to keep their troubles from spilling into Turkish territory.