Are PKK Fighters Moving to Syria? 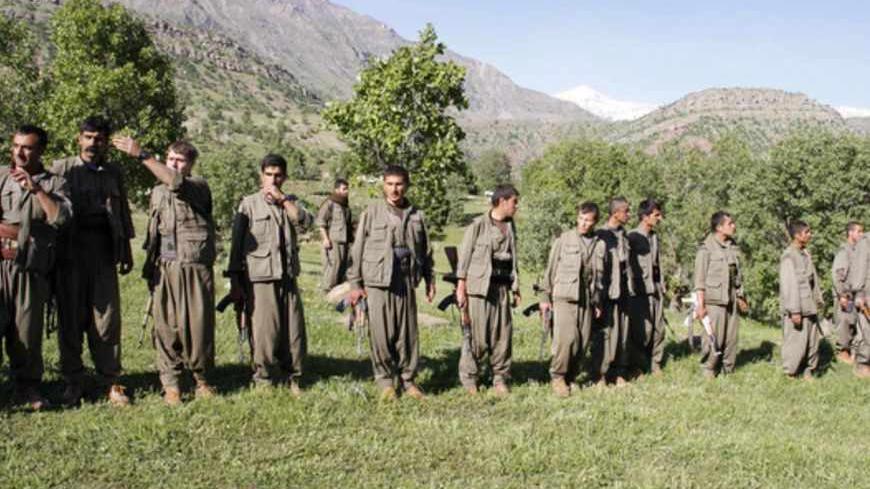 Kurdistan Workers Party (PKK) rebels gather to listen to the speech of their leader on April 25, 2013, in the Kandil Mountains in northern Iraq. - AFP/Getty Images

The leader of the main opposition Republican People’s Party (CHP), Kemal Kilicdaroglu, believes the ruling Justice and Development Party (AKP) does not really see the risks its policies are posing for the country’s unity and security.

“While the crisis is deepening in our neighboring country, Syria, and the Kurdish groups in Syria’s north gain power, the AKP’s decision to start negotiations with the PKK [Kurdistan Workers Party] gives the impression that there is also a set of regional calculations on the agenda,” he said today, May 10, at a media event entitled “CHP’s Proposal and Priorities for Democracy, Rule of Law and Societal Peace.” Kilicdaroglu listed 19 reasons why CHP keeps its distance from the AKP’s negotiations with the PKK.

While there is nothing new about politicians clashing over ideas, the differences between Turkey’s political camps are so wide that there seems to be no common vision for the future. It's not that people don’t want peace and prosperity as a regional power, but the opposition holds that the risks that the AKP is taking are so huge that failure will cost the country dearly, and will potentially set off a bigger struggle to keep peace at home.

The Erdogan government, however, feels so confident that it neither listens to such warnings nor cares to build bridges in parliament with the opposition parties. There seems to be no culture of consensus building in today's Turkey, just bitter criticism of one another. Erdogan loves to remind us that a majority of the eligible voters elected him to office, and that’s all that matters.

The AKP is confident that it’s halfway through solving the country’s chronic Kurdish issue as PKK fighters started to withdraw to northern Iraq on May 8. The AKP takes pride in establishing close relations with the Iraqi Kurdistan Regional Government (KRG) and believes that the KRG leadership will play a supporting role to help the AKP successfully finalize the talks with the PKK. As Denise Natali, however, succinctly explained, there is also trouble between the PKK and the Iraqi Kurdish leadership, and the PKK challenges KRG President Massoud Barzani’s “ambitions to become a leader of all the Kurds.”

There is still a perception in AKP circles, though, that once the talks with the PKK successfully conclude, all the Kurds in the region from Iraq, Iran and Syria will look to Turkey as if drawn to a magnet, and that their rich oil and natural-gas reserves will all pass through Turkey via pipelines to Europe and other markets, making Turkey even a bigger player in regional politics. Erdogan said today that the fight with the PKK for almost four decades cost “$350 billion” and “stood as a stumbling block before the democratization of the country.”

Kilicdaroglu, however, expressed caution that while Erdogan is expecting the Kurds to grow dependent on Turkey and help it become the superpower of the region, they may in fact find a way to become independent of it entirely.

“The AKP is keeping quiet as the PYD [Democratic Union Party] takes action to control Syria’s north. Once they establish control in Syria’s north, [the Kurds] who take over the north of Iraq and Syria will have access to the Mediterranean, and that is going to change the whole calculus in the region,” Kilicdaroglu said, adding, “the AKP is following policies that helps to strengthen this phenomena from economic, trade and other angles.”

“This process is moving forward according to Ocalan’s roadmap,” Kilicdaroglu said. “There are serious beliefs that those PKK fighters moving outside of Turkey’s borders will be sent to the frontiers in Syria to fight against the regime.” There are indeed others talking about this scenario in Ankara’s beltway, that the PKK fighters have already started to move to Syria’s north, which is historically defined as part of Kurdistan. While there is more fragmentation in Syria among Kurds, and it won’t be easy to bring them under the same umbrella, there are those in Ankara’s beltway who remind us that Kurds have learned to survive under the most difficult circumstances, and that once they see a real possibility of establishing their own country — or feel that they can establish their autonomous rules in all these regional countries — they won’t waste their chance by fighting against each other.

“Iraqi Kurds used to fight against each other in the ’70’s and ’80’s,” one source told Al-Monitor. “Look how they’re getting along today. One has become the Iraqi president [Jalal Talabani], and the other become the president of the KRG.”

The Turkish opposition is cautioning that the Erdogan government fails to read the developments in the region correctly.

“These developments suggest that the borders of the countries in the Middle East might be redrawn by wars and conflicts in the not-so-distant future,” Kilicdaroglu said. “The sovereign powers have given AKP the role of a surrogate mother for the creation of these new entities. By taking on this role, the AKP is exposing our and regional people’s fates to danger in the near future for the sake of short-term interests.”

Kilicdaroglu also questions the timing of the drafting of the new constitution and the talks with the PKK. While he stresses that a lasting solution can only be achieved by strengthening Turkish democracy, he suggests that the parliament could contribute tremendously to the Turkish democracy if it lowered the 10% threshold in the popular vote needed to be represented in the Turkish parliament.

“It’s time to lower down this threshold. People vote for someone else, but just because their parties are not able to pass this 10% threshold, others who do pass it grab those votes. It’s robbery of people’s will,” Kilicdaroglu said.

In fact, the military constitution drafted in 1982 mandated that threshold as a blatant move to keep Kurds out of Turkey’s politics. While the AKP still resists lowering that threshold, it’s also suggesting that the country should change its parliamentary system to a presidential one because a fragmented political climate does not help to keep Turkey’s economy and stability intact. What Kilicdaroglu and other opposition members argue is that if the people want democracy, and if the ruling party is confident of its unbeatable charm and success, there should be no reason to fear opening up to true representation in the parliament.