Turkish Prime Minister Erdogan's government will survive the protests, but what these uprisings may mean at the ballot box still remain unclear. 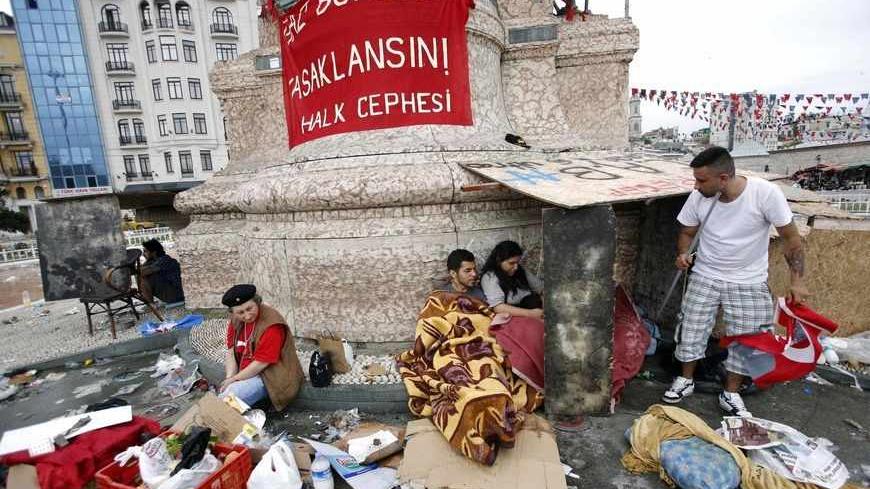 Turkey’s Justice and Development Party (AKP) government won’t step down because of the weeklong protests in Istanbul, which spread to at least 10 other cities — including Ankara, the capital of the country. The protests began on Monday, May 27, as an innocent demonstration of 500 people in Istanbul to oppose a construction plan to replace a park at Taksim Square with an Ottoman artillery barracks that was originally built in 1780 and destroyed in 1940.

It’s too early to come to a conclusion as to how these events might impact the ballot box. Today’s issue, however, is that Prime Minister Recep Tayyip Erdogan does not seem to understand the message coming from the streets, and is attempting to paint himself as a victim once again — this time as a result of the good service he says he is providing the public.

“I am saying this very openly and clearly,” he said Sunday. “We won’t allow a few street bandits to go to that square and provoke our people with misinformation. When this nation cast its vote for us, it did so for us to reclaim our history.” Erdogan also said, “The CHP’s [Republican People’s Party’s] mindset demolished that Ottoman artillery barracks built in 1780 during [Ottoman Sultan] Selim III and built a stadium there. We will rebuild that historic barracks there.”

A few facts: When people brought the AKP government to power in November 2002, they cast their votes in protest of the mainstream political parties that had brought Turkey into severe economic crisis; people wanted to give something new a chance. In the following two elections, the Erdogan government probably continued to win due to its economic success, and because the opposition parties continued to fail to convince the people that they could do a better job once in power. Invoking Ottomanism is all about Erdogan’s personal vision, but there is no data — except for the prime minister’s word — that people voted for the AKP to reawaken the Ottoman era.

Erdogan may be mentally at war with the CHP’s mindset, and may feel more connected to the Ottoman past. He is, however, the prime minister of a republic, not an empire. But if he insists on returning back in time to the 1780s, there are those who can remind us that Sultan Selim uprooted an Armenian cemetery there to build the barracks. Going back in time and pushing an Ottoman agenda even in city planning is really pushing a certain segment of the society to the edge. But these few trees at Taksim Square seem to be only an excuse to unload an amassed anger about many things, such as the demolishing of a historic movie theater, Emek; the construction of a new bridge that connects the Anatolian and European sides of Istanbul, cutting more trees there; introducing new rules to the restaurants at Beyoglu and  Istiklal Caddesi, the heart of entertainment in Istanbul; and the limitations brought to alcohol consumption. The list may continue to grow.

The point is, protesters in Istanbul are expressing frustration that Erdogan has turned the city into his own playground, forcing his vision for the city on everyone. This is annoying those who feel he is altering places sacred to them and has not even bothered to include their perspective in making all the changes.

As Erdogan continues to describe the protesters as people engaging in “illegal activities” and “street bandits,” he may be missing an opportunity to connect with those who think his policies are ignoring them and that he is treating them as if they don’t count. Not everyone has to praise the Ottomans or believe that rebuilding demolished Ottoman buildings should be prioritized. It’s one thing for one to know his or her past, but something else to try to relive that past and reawaken it every day. Many want to live the present and prioritize the values of the republic. Erdogan’s remembrance of history is about praising the Ottoman era, covering over its mistakes, and about putting down the republican era, highlighting all its problematic chapters. This imbalance weighs heavily on people, and they are literally showing on the streets that they can’t take it any longer.

People expect Erdogan to be more inclusive and accept the fact that they have a say as to how their city will be shaped, and not just when they cast their ballots. “I have never favored a majority rule, but I won’t ever allow the minority to force [its decisions] on the majority,” Erdogan said. That may sound fine, but how do you find common ground by altering what are sacred corners of the city for a certain segment of the population, all the while making decisions on the new look without their input?

In that framework, these weeklong protests are a reflection that Erdogan has gone too far on some sensitive issues. Istanbul is a uniquely beautiful city divided between the European and Anatolian sides. It is big, its traffic is too crowded and it’s impossible for anyone to know every part of Istanbul, but everyone crosses through and knows Taksim. It’s the heart and the pulse of the city. While the protesting crowds are trying to make a statement that they don’t want their square, their crossing point, to be changed — at least not without their consent —  Erdogan said Sunday that a mosque will be built there.

The prime minister often reminds us that he is a conservative person and a pious Muslim. As a Muslim, he should consider that his style of executing decisions and introducing religious symbols creates a reaction. The Ottomans and the Islamic symbols could have been introduced to public debate in a more inclusive style rather than an aggressive one. This history is the inheritance of this republic, and not exclusive to Erdogan and his followers. Still, some have outgrown the psyche of this imperialistic background. And how wrong could that be, and why not?

Tulin Daloglu is a contributor to Al-Monitor's Turkey Pulse. She has also written extensively for various Turkish and American publications, including The New York Times, International Herald Tribune, The Middle East Times, Foreign Policy, The Daily Star (Lebanon) and the SAIS Turkey Analyst Report. On Twitter:@TurkeyPulse