Erdogan Must Face The Limits of His Power

Erdogan’s policies have resulted in divisions and strains in Turkish society. 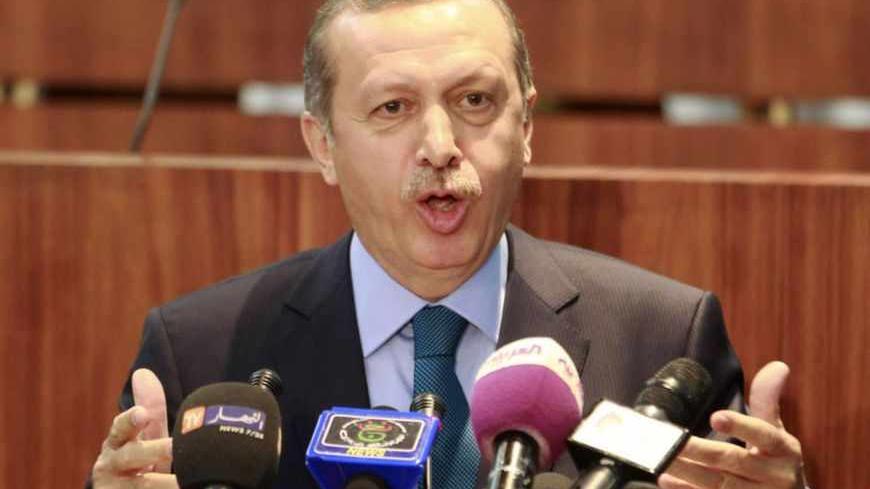 These lines are not written from a desk. That desk is already at Taksim, in an apartment in the eye of the storm. The gas that makes my eyes run, the smell of gas that burns my throat, the whine of the helicopters, slogans, banging of pots and pans, explosions, protesting car horns, police sirens, the lot of it immediately reach the desk where these lines are written. Every time I get up from my desk it is as if touring the eye of the storm.

Let’s start then. The rebellion that started at Istanbul’s Taksim Square on May 31, and from there spread to an important segment of the country, must be described as a "social explosion."

An “explosion,” that is, the bursting of a colossal energy … for a social explosion to come about, one needs to squeeze and turn the screws on a society incessantly, without letup. This is exactly what Turkish Prime Minister Recep Tayyip Erdogan has been doing for a long while.

This social explosion is the personal creation of Erdogan. The rebellion is not targeting the AKP rule but the person at the top of it. A significant segment of the society, no longer able to tolerate systematic denigration, insults and marginalization by a leader suffering from hubris syndrome, a leader who is uncomfortable with their secular life styles and culture, and who actually saw them as “’cluster of mistakes that have to be corrected” went out into the streets.

Look what this prime minister did or arranged to become an “object of hatred" in the eyes of a part of the society and than goad them to explode.

Turkey has become a country where students participating in peaceful university demonstrations are detained on charges of “membership in terror organizations,” tried for harsh sentences and imprisoned for long terms.

As of April 2013, there were 69 journalists and 30 distributors in Turkish prisons. For the past few years, Turkey has been the world champion of imprisoning journalists.

Mainstream media are under massive self-censorship pressure. Since 2008, the Turkish media have not been reporting on corruption. Readers are seeing their favorite columnists fired one after another.

During the election campaign, the prime minister had the Alevis who make up at least 15% of the population, booed in the person of Kemal Kilicdaroglu, the leader of the main opposition Republican People's Party (CHP) who is an Alevi. Alevis are the target of systematic discrimination.

Major efforts were made in 2012 to make education and curriculum more religious. Many regular high schools were suddenly turned into imam-preacher schools without even consulting with parents.

Erdogan’s paternalist style that doesn’t consider the society mature enough created a serious accumulation of anger in a segment of the population. They couldn’t put up with a prime minister lecturing them like a headmaster; constantly calling on women to have at least three children; to see himself qualified to intervene with scripts of TV serials and finally deciding that the national drink is ayran [yoghurt drink].

It is possible to make a much longer list and add to it the obstruction of freedom of communication and widespread telephone bugging.

At the beginning of May, Erdogan banned May 1 Labor Day demonstrations at Taksim Square and the police he commanded repulsed with gas the people who wanted to come to Taksim. That was an arbitrary and authoritarian decision that totally disregarded the sentiments of a segment of people.

Then, May 10, the AKP submitted to Parliament a bill that introduced what boils down to an alcohol ban. This Islamist and ideologically motivated bill was enacted with some modifications.

It was clear that many of the clauses of the law far exceeded the objective of protecting public health but sought to make illegitimate and immoral the drinking culture of the secular middle class, which constitutes an important segment of society. It aimed at removing a lifestyle Erdogan finds repugnant from public spaces. The prime minister denigrated anyone who drinks with labels such as “drunkard, alcoholic, under the weather.” He instructed them: ”Go and drink at your home.”’

The alcohol ban has led to a major rupture and anger in society. People are worried that, at this rate, Erdogan will be telling them how to dress. On May 29, at the ground-breaking ceremony for the third bridge over the Bosphorus strait, it was announced that the bridge will be named after Ottoman sultan Yavuz Sultan Selim, a figure known for his Alevite massacres during his reign, and therefore abhorred by the Alevis.

Speaking at that ceremony, Erdogan dismissed civil society activists who oppose the cutting down of 70-year old giant trees at Taksim and replacing them with a shopping mall modeled after the Artillery Barracks that was razed in 1940 by saying, ”Do what you want. We have decided."

On the morning of May 31, letting the police was loose on several hundred people who had come to protect the trees was the last straw. The fuse of the suppressed, angered society was ignited on May 31 and that society exploded.

If that wrong order had not been given on that day, Erdogan’s government would not have been shaken by a rebellion unprecedented in Turkish history.

As Cengiz Candar wrote at the conclusion of his Al-Monitor article, “Is it Turkey’s Velvet Revolution? Or Tiananmen? Or Tahrir?" after the May 31-June1, 2013, events in Istanbul, "Many things, including the fate of Erdogan, cannot be predicted."

Perhaps it won’t be easy to predict what can happen, but we can easily predict what won’t happen. One thing is for sure: The polarization policy Erdogan has intensified without letup after the 2007-2008 period has expired.

This divisive policy of Erdogan, which we can summarize as “polarizing the society between the conservatives and secularists with discriminatory, marginalizing policies and then consolidating the conservative voters with their Sunni identities under the AKP," is no longer a tool of stability, but of instability.

Erdogan has always been causing the amassing of hatred and anger while suppressing society and creating tensions, but he never had to confront the cost of this accursed policy until May 31.

From now on, this policy will come with a high price. Just as they changed the Syrian policy that had become a source on instability, they have to change this polarization policy finally recognized as a source of instability.

Erdogan used his polarization strategy also to make Turkey more conservative and to reshape public life and to rewrite some laws as stipulated by the requirements of Sunni Islam. If he had seen thousands of young people publicly sipping their beers at Taksim, he could have realized that the resentment of alcohol bans also had a part in the rebellion.

But for the time being Erdogan is behaving like a provocateur who didn’t get the message. On June 2, before departing on his Maghreb tour he called the protesters “street thugs” and announced his intention to have a mosque built at Taksim.

Erdogan has reached the limits of his power. If he persists with his policies, the only result will be instability and the flight of capital.

The Istanbul stock market lost 10.5% on June 3. This must be perceived as a warning.

Erdogan must understand that he is at the limits of his power and that he must refrain from further straining Turkish society.