Most observers consider it unlikely that Iraq will consider revising its electoral law ahead of the 2014 elections. 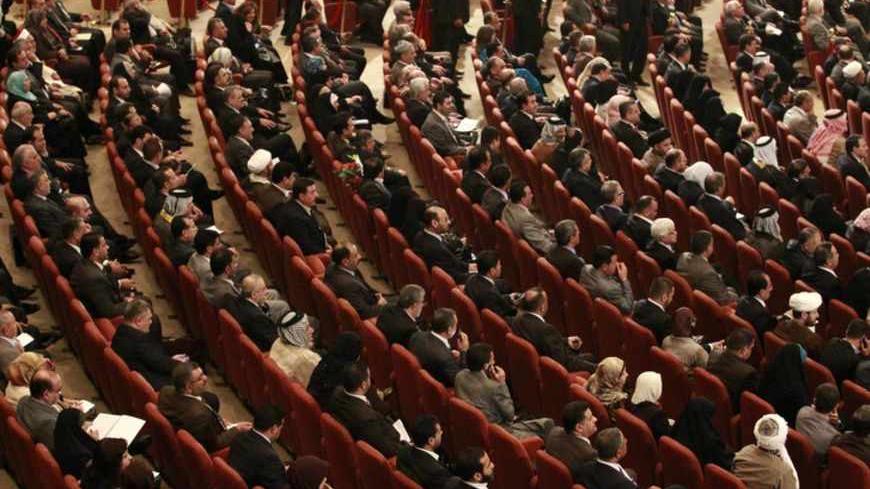 Members of the new Iraqi parliament attend a session at the parliament headquarters in Baghdad, Nov. 11, 2010. - REUTERS/Thaier al-Sudani

Every election season in Iraq triggers discussions of a new election law and electoral mechanisms. Questions abound as to which parties would stand to benefit or lose from such an election law or mechanism.

The Iraqi media have recently highlighted the intention of political parties to re-adopt the "closed list" system and consider Iraq as "one constituency," a system that was adopted in the 2005 elections. However, the system was abandoned in the 2010 elections in favor of the "semi-open list" system, which divides Iraq into 18 "constituencies" that represent Iraq's provinces.

These developments come as the March 2014 parliamentary elections draw near. The major political blocs in Iraq have said that they would be negatively impacted by the adoption of the so-called "Saint Lego" law in the April 2013 local government elections.

The main issue is not the Saint Lego system, which is a mere mechanism for the distribution of votes. The main problem is Iraqi political forces attempting to tailor seasonal election laws to their interests.

All election laws adopted in democratic countries are enacted on the basis of a key principle: to translate the voters' will into figures and results. The diversity of electoral laws is due to diverse conditions, experiences and capabilities of communities. The election laws in countries that have a presidential system would certainly differ from the laws adopted in countries with a parliamentary system. Furthermore, these laws would differ in a country that suffers from social divisions as opposed to another that enjoys internal harmony.

The diversity of laws reflects the needs of the community, not the political forces and parties, which are also supposed to respond to communities' needs.

What is happening in Iraq in this regard is quite different. The political forces still believe that a successful electoral law would guarantee the interests of parties and majorities, not the people and minorities.

This is perhaps the reason for the non-application of the electoral law in Iraq, and the insistence that it remain flexible to political circumstances. The installment of an electoral law is key to political stability in any country. This is why electoral laws in some nations are of a constitutional, and thus permanent, nature.

Parties must adapt to a permanent and fixed electoral law, not vice versa. Also, political forces must base their strategies on their popular weight, rather than on votes that can be secured by a certain electoral law.

Ever since the political changes of 2003, Iraq has suffered from representational flaws. All previous laws — including the one adopted in December that the major forces believe harms their interests — do not provide genuine popular representation.

This failure can be attributed to two reasons:

First: the lack of accurate data on the population of Iraq. A proper census could provide this information, but Iraq has not conducted one for two decades. Before the 2014 elections, a population census is expected to be conducted.

Second: a lack of political will to enact a fair and permanent electoral law approved by all parties, and the lack of capabilities to achieve such a goal.

Regarding the population census, political and ethnic disagreements — especially over areas of dispute between the Iraqi Kurdistan region and the central government, namely Kirkuk — have hampered serious attempts to conduct such a census. As for the political will and capabilities, the Iraqi state has so far only managed to divide Iraq into 18 electoral districts, distribute the seats according to the population ratios of each province and partially open party lists to enable voters to choose only one candidate.

However, these will not be the last attempts by countries in their quest for real voter representation. Electoral districts can be divided into over 100 districts, and electoral lists can be fully open for voters to choose on the basis of individuals, not parties. There is also the possibility of closed national party and individual lists. In addition, there is the potential to follow less complex and more efficient mechanisms to encourage voters to cast their ballots, instead of wasting hundreds of thousands of votes on due to outdated programs and the lraqi Independent High Electoral Commission.

Elections are a pivotal event in any democratic system. Thus, the government should provide its support and the necessary elements to ensure their success. First and foremost, the elections should not be linked to a political mood that changes with the seasons.