Egypt on Precipice? Moving Beyond Crisis

Egypt faces the precipice on the eve of the June 30 protests. 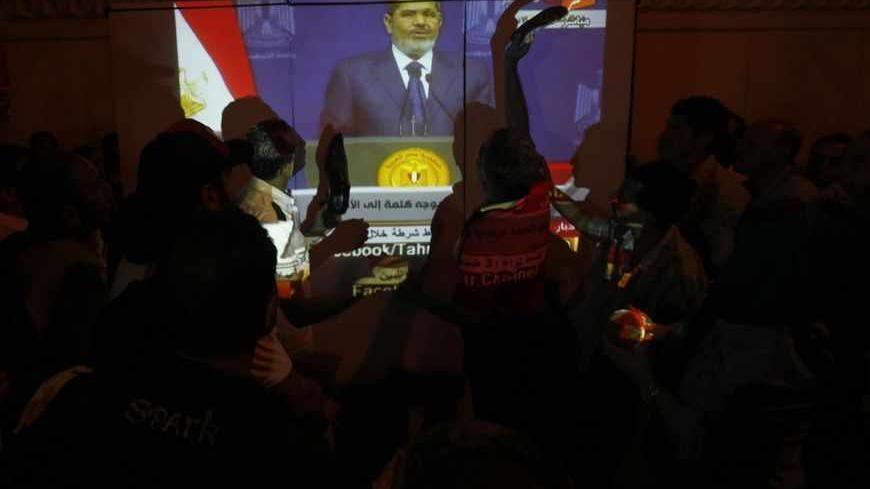 Protesters opposing Egyptian President Mohammed Morsi shout slogans and hit the screen with their shoes as he speaks to the nation, in front of the Ministry of Defense in Cairo, June 26, 2013. Morsi blamed "enemies of Egypt" for paralyzing its new democracy in a speech on Wednesday that criticized street protests ahead of mass rallies against Islamist rule this weekend. - REUTERS/Amr Abdallah Dalsh 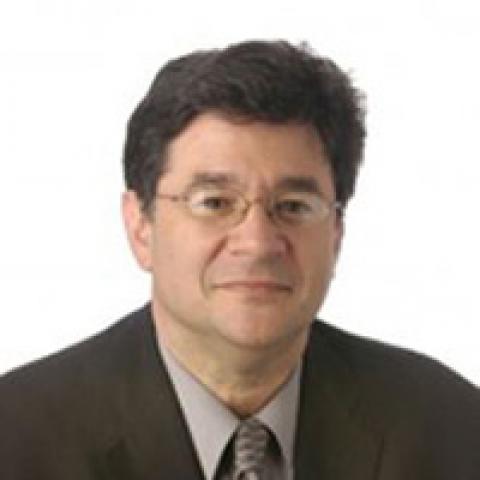 Egypt is dangerously close to slipping off a precipice. A transition that began with exuberance and high hopes may be destroyed or at the very least delayed for months or years. As these prospects loom, so does the pre-emptive debate regarding “Who is Losing Egypt?” Who is to blame for the descent into economic chaos, into escalating identity conflicts and into a severe crisis of legitimacy that Jim Zogby’s most recent poll says has left the Muslim Brotherhood only 28% support — in short, toward the abyss of a state collapse that the military is openly warning may require its intervention?

One thesis, proffered by the Muslim Brotherhood’s Freedom and Justice Party — and by my Georgetown University colleague John Esposito — is that the secular opposition is largely responsible for the current mess. Advocates of this position echo a useful distinction made by Tareq al-Bishri — a leading judge who led a constitutional reform committee early on in the transition — that Egypt’s Islamists are democrats but not liberals, while non-Islamists are liberals but not democrats. Elaborating on this thesis, Esposito suggests that secularists are trying to create a crisis that will invite the military back in. Their demand that President Mohammed Morsi resign, he suggests, might be calculated to produce this result. Decrying such an outcome, he insists that the only legitimate arena for changing the government is planned (but postponed) national elections.

A counter thesis, proffered by the leaders of the April 6 Movement, is that they are not merely trying to force early parliamentary elections and in so doing replace a government produced by an "illegitimate" process: They are also trying to prevent the installation of a government that is using every measure to build a permanent electoral majority and thus shut out the opposition. Pointing to the example of Prime Minister Recep Tayyip Erdogan in Turkey, they insist that the purpose of the June 30 protest is to prevent the imposition of a “Turkish style” electoral autocracy on Egyptian society.

Not surprisingly, the complex reality Egypt is facing does not easily fit into either one of these polarized accounts of the crisis. Somewhere in the fuzzy middle there exists a closer approximation of an elusive truth, and perhaps a basis for moving beyond the worsening impasse.

Let us begin with the argument made by the supporters of the June 30 protest. Their fears should not be ignored. Whether they represent 5% or 45% of the populace, they are a crucial sector of society that feels the threat of exclusion. The basic rule of any transition is that electoral victors must provide clear guarantees of others’ basic rights. In short, consensus is the basis for any transition. But in contrast to Tunisia’s Ennahda movement, Brotherhood leaders did not signal a desire to ensure secular groups an equal and effective voice in the constitution writing process. Islamists then proceeded to write a constitution that non-Islamists viewed as lacking basic democratic guarantees.

Indeed, the subsequent quasi-election of the upper house, or Shura Council, allowed the Freedom and Justice Party to propose new autocratic laws, not least of which was a nongovernmental-organization law far more draconian than its predecessor. If Morsi’s opponents worry that the Brotherhood intends on using a majoritarian process to exclude them, they cannot be blamed. Their call for the “masses” to return to Tahrir is a sign of profound estrangement brought about in part by the actions of Egypt’s elected leaders.

Still, supporters of the Egyptian government do have a point: If at every point in a contested transition losers can go to the streets and upend the process, would this course of action not undermine the very democratic principle that is supposedly being defended? Indeed, quite apart from principles, the leaders of the June 30 protests must ponder some hard, practical questions: Are they going to the street because they lack the capacity for sustained mobilization that their rivals enjoy? Will returning to Tahrir provide distraction from the daunting task of mobilizing a grassroots constituency? In short, is the call for protest a metaphor for the structural weakness of the opposition?

Perhaps so. But as I have suggested, a successful transition hinges partly on the readiness of winners to be generous to losers. Critics of the June 30 protests are right: Democracy does require a “loyal opposition.” But a loyal opposition can only emerge when its members perceive that they, too, will one day have a shot at governing. Preclude this possibility, and the basis for a loyal opposition evaporates.

Egypt is surely dangerously close to just this point.  What then is the path forward? Morsi is calling for a national dialogue with all parties. Opposition leaders see this as a ruse, and what is more, they feel the tide of history is with them. However we judge these perceptions, absent a credible third-party arbiter — or credible incentives to negotiate — the call for dialogue will not suffice. This leaves the military, which probably does not want to intervene but may feel compelled to do so, and thus once again pretend to be in the national arbitration business.

This is no solution. The far preferable alternative is for the government to offer a meaningful proposal that would signal a real desire to compromise. While it is up to the government and the opposition to find its own basis of accord, I would offer the following possibilities:

For starters, Morsi’s government could agree to early parliamentary elections under an independent election authority. It could further pledge to suspend the Shura Council’s NGO law and allow a newly elected parliament to consider it along with all other controversial proposed laws. A bolder step would be to create a national unity government presided over by a new prime minister drawn from the opposition. This government would agree to new election dates for the parliament and the presidency. To give this proposal moral weight, the government might invite al-Bishri to help negotiate. Support from Al-Azhar University and its venerable leadership could also provide moral authority for these efforts.

Perhaps this is all wishful thinking. With a myriad of challenges in the courts providing additional impetus for contesting the entire transition, neither side seems ready to compromise. But unless the moral vision and hard-nosed pragmatism required for chartering an exit from the escalating crisis emerge soon, Egypt’s path looks bleak.

Daniel Brumberg is co-director of Democracy and Governance Studies at Georgetown University and a senior adviser to the United States Institute of Peace. These remarks reflect his personal opinions and not those of any organization.