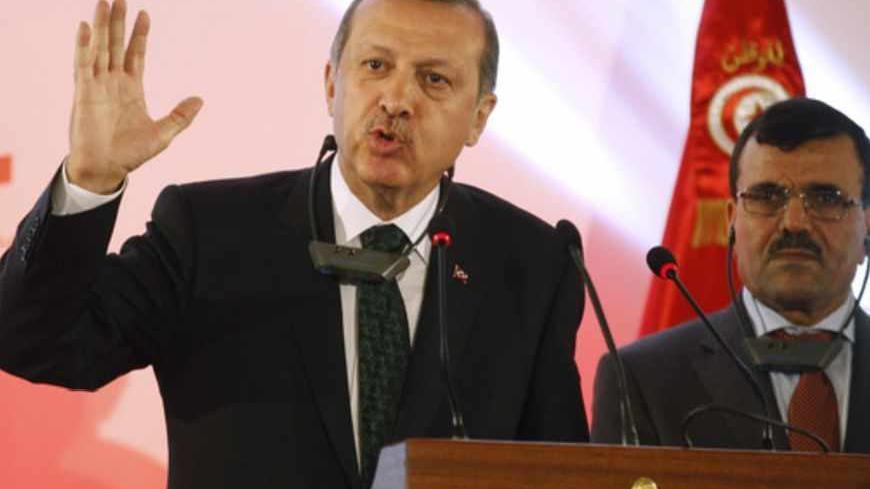 Turkish Prime Minister Recep Tayyip Erdogan, who is reviled by angry protesters in his own country, has been on an official visit to the Arab Maghreb countries since June 3. The visit included Morocco, Algeria and Tunisia.

These last few days have been marked by new rallies and violent acts in Turkey — despite the excuses made by the government — and the incensed demonstrators continue to demand that Erdogan be toppled, criticizing his authoritarian tendencies and willingness to "Islamize" the secular nation. Turkish unions also joined the ranks of protesters, demanding the outright departure of the head of the conservative Islamist party, the Justice and Development Party (AKP).

In this somewhat tumultuous context, marked by the deterioration of the political and social situation, Erdogan embarked on his visit. He is heading a delegation of more than 200 businessmen, so as to extend his influence to the Maghreb region, which remains one of the main hubs of Turkey's interests.

The first stop was Morocco, where Erdogan was welcomed in Rabat by the head of government, Abdelillah Benkirane. Accompanied by an important delegation of ministers and businessmen, he did not seem to have succeeded in his North African tour. Erdogan, who has been roundly criticized by Istanbul's citizens for being "authoritarian," received his first "cold welcome" in the kingdom.

Erdogan's visit to Morocco, which had been initially scheduled for two days, fizzled out. No one expected that King Mohammed VI would not receive the Turkish prime minister. He was received by Benkirane, who also belongs to a "moderate" Islamist movement.

The AKP leader cut short his trip to Morocco to head to neighboring Algeria, where he was welcomed by Abdelmalek Sellal, head of the government, since the Algerian president has been in France for a long recovery.

This visit has not generated much interest among Algerians, who have been almost indifferent to it. This was confirmed to Al-Monitor by the leader of the Islamist Front for Justice and Development, Abdullah al-Djaballah.

"I encourage closer cooperation with countries from the Muslim world. Turkey is a rich and developed country. Rapprochement with this country, with which we have good relations, is appreciated. However, unfortunately, the visit of Turkey's prime minister has failed to generate the interest it deserved and has been different from that of [French President Francois] Hollande in terms of media coverage," he said.

During his visit to Algeria, the Turkish prime minister had the opportunity to discuss with Sellal ways of consolidating cooperation between the two countries. Erdogan, who delivered a speech before the members of the Algerian National People's Congress,  also participated in a forum including businessmen from both countries.

This move aimed at giving further impetus to economic cooperation between the two nations, bound by a Treaty of Amity and Cooperation signed in 2006, regarding the textile, automotive and agribusiness industries.

"This visit reflects the will of both countries to take their political rhetoric and economic relations to the highest level, as mentioned in the Treaty of Amity and Cooperation concluded in 2006. This agreement, which reflects common understanding and cooperation, will certainly pave the way before these two nations, which share a long and rich history, to embark on the path of the future with a solid foundation," the head of the Islamist party's communications office said, speaking to Al-Monitor.

Economic cooperation between Algeria and Turkey was further consolidated on Wednesday, June 5, by introducing the new electric arc furnace (EAF) in Bethioua in Oran province, with a production capacity of 1.2 million tons of steel per year. The EAF was implemented by the Turkish-Algerian company Tosyali Iron and Steel, for an amount of 26.5 billion dinars ($2.5 billion).

Nevertheless, both nations share other concerns. "During this visit, a number of regional and international issues of common interest have been discussed. This is especially true in light of the upheavals and crises gripping the Euro-Mediterranean region, which necessitates ongoing consultation and dialogues between all the region's countries, in order to introduce a process of national reconciliation, without interference in the internal affairs of sovereign nations, in accordance with international law," Sellal told the local press.

The security situation, the resurgence of terrorist threats, and transnational crime are challenges that will bring the two nations closer to each other so as to form a common front. In order to achieve reconciliation and facilitate the movement of citizens of both countries, the Turkish communications adviser spoke of the possibility of canceling visa requirements between the two countries, given the fact that trade exchanges amounted to $5 billion in 2012, not to mention that Turkish investments in Algeria were estimated at $1 billion in 2012.

Turkish officials have also expressed their willingness to increase the size of Turkish investments in Algeria to $3.5 billion. The Turkish delegation left Algeria and headed to Tunisia, the last stop of its North African tour, where it will spend two days.