Congress Not Won Over By Rouhani Victory in Iran

Congress wants to press ahead with sanctions on Iran but the White House may go slow if Iran improves cooperation with the International Atomic Energy Agency. 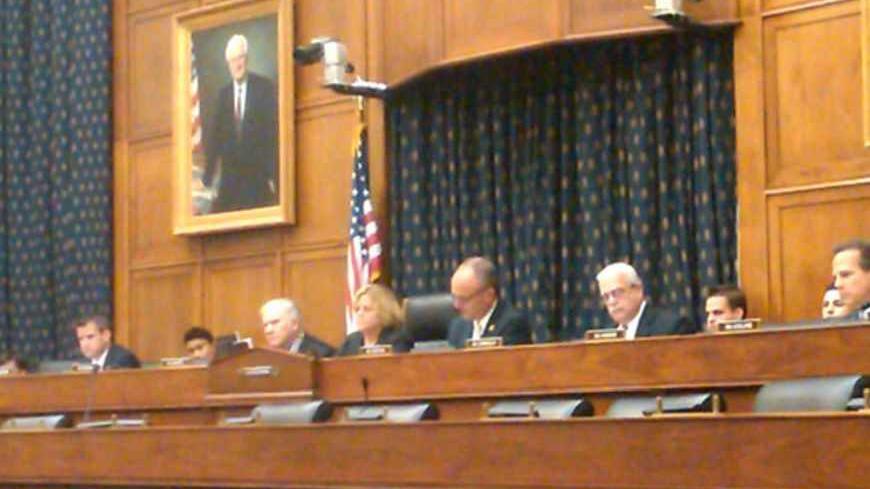 The House Foreign Relations Subcommittee on the Middle East and North Africa discussed the future of Iranian sanctions at a hearing on June 18, 2013 - Barbara Slavin

WASHINGTON — The surprise election of pragmatic former nuclear negotiator Hassan Rouhani has won few converts on Capitol Hill, but new sanctions legislation could be avoided or postponed if there is progress in Iran's cooperation with the International Atomic Energy Agency (IAEA).

At a hearing on June 18, before the House Foreign Relations Subcommittee on the Middle East and North Africa, several expert witnesses implored Congress to give Rouhani time to alter Iran’s nuclear trajectory before seeking to impose new penalties.

If their advice changed any minds in a body that has passed ever-tougher sanctions against Iran, no member of the committee was willing to say so.

Asked at the conclusion of the hearing whether the witnesses' views had altered hers, Republican Ileana Ros-Lehtinen of Florida, chair of the subcommittee, told Al-Monitor, “Not at all. We need to continue our sanctions policy and help our allies to see the light that a nuclear Iran will destroy the United States and will destroy Israel.”

Ranking Democratic subcommittee member Ted Deutch of Florida was less apocalyptic in his description of Iran’s aims but equally adamant that the House should go forward with a new bill that would designate Iran’s Revolutionary Guards a terrorist organization and require President Barack Obama to work to take another million barrels a day of Iranian oil off the market — essentially ending Iranian oil exports, which have already dropped in half over the past two years. The bill has already been approved by the full committee and awaits action on the House floor.

“The Iranian people voted for moderation and for reform that includes the regime’s approach to the nuclear issue,” Deutch told Al-Monitor. “I don’t think these are mutually exclusive. We can continue to move forward [with sanctions] even as we wait to see whether there’s going to be movement coming from this new president.”

Despite this skeptical reaction, it is unlikely that the House bill or a similar piece of legislation in the Senate will be passed before the fall or reach Obama's desk before the end of the year. That gives Iran and its negotiating partners time to try to reach an accommodation that might delay or derail new restrictions on the already battered Iranian economy.

A long-time congressional staffer, who spoke to Al-Monitor on condition of anonymity, said the White House might ask Congress — in particular the Democratic-majority Senate — to wait before approving new sanctions legislation if Iran takes conciliatory steps, such as meeting demands of the IAEA for more intrusive inspections.

“If the administration wants to slow down the congressional choo-choo train, they’ll need something concrete,” the staffer said.

Rouhani, in his first news conference as president-elect, promised “steps toward further transparency” and said Iran would “try to win back [the] trust” of the international community that its nuclear program is not intended to produce weapons. Rouhani acknowledged the harsh impact of sanctions, which he called “brutal,” and said he hoped to alleviate them “step by step.”

The Obama administration’s response to Rouhani’s decisive victory has been positive but cautious.

Obama, interviewed by PBS 24 hours after Rouhani’s victory was announced, said, “We’re going to have to continue to see how this develops and how this evolves over the next several weeks, months, years.”

Asked if the United States and its negotiating partners would prepare a sweeter offer to Iran than the last proposal tabled by the so-called P5+1, State Department spokeswoman Jen Psaki said Monday that the initiative lay with Iran: “They know what they need to do, the ball’s in their court.”

On Capitol Hill, however, both Democrats and Republicans seem less than swayed by Rouhani’s words and convinced that he lacked the power to change Iran’s direction but that Iran was trying to dupe naive Westerners into believing that he could and would.

Sen. Mark Kirk, Republican of Illinois and the author of numerous sanctions bills, tweeted soon after Rouhani won that the former nuclear negotiator was “hand picked by the Supreme Leader & Guardian Council.”

“His rec of deception on the nuclear program is clear,” Kirk continued. “With time running out, the Senate should move forward with toughest sanctions possible — rope-a-dope talks not an option.”

Kirk and Sen. Joe Manchin (D-W.Va.) have co-sponsored a bill that would further restrict Iran’s access to its hard currency reserves abroad and deepen Iran's economic crisis. It has not yet been approved by all the requisite committees.

Back on the House side Tuesday, Democrats and Republicans on the Middle East subcommittee competed in expressing doubt about the potential of the new Iranian president to resolve the nuclear crisis or bridge other differences with the United States.

“I don’t know if we have the luxury to see how this develops,” said Adam Kinzinger, (R-Ill.), referring to what he described as the imminence of Iran achieving nuclear weapons capability. A decade ago, he suggested, the United States could be more patient.

Juan Vargas, (D-CA), said he doubted Iran would uphold any nuclear agreement even if one could be reached.

Former President Ronald “Reagan said trust and verify [when it came to the Soviet Union],” Vargas said. With Iran “it’s verify and verify.”

Several subcommittee members said the fact that Rouhani won, beating more conservative pro-regime figures, was a sign that US and multilateral sanctions are working and thus that more sanctions would force Iran to limit and even dismantle its nuclear installations.

“US pressure is just beginning to pay off,” Deutch said. “We shouldn’t be willing to give up on the pressure” just because the new Iranian president sounds less bellicose than the incumbent, Mahmoud Ahmadinejad.

Deutch echoed concerns expressed by Israeli Prime Minister Benjamin Netanyahu and other Israelis that the replacement of Ahmadinejad by someone less outspoken would undercut the international consensus against Iran that has developed in recent years and that Russia and China, in particular, would accept a less rigorous nuclear deal.

The witnesses all assured Deutch that that was not the case. “We shouldn’t be too worried that the entire sanctions regime will fall apart,” said Karim Sadjadpour of the Carnegie Endowment for International Peace.

Suzanne Maloney of the Brookings Institution added that if Iran is “not serious, we’ll certainly know that.”

Putting more sanctions on now would be “a disaster,” she said. “The next step should be at the negotiating table, not in this building. … We should be prepared to offer more than spare parts for airplanes, … meaningful sanctions relief for meaningful concessions.”

"Let's give them an off-ramp" from this crisis, agreed Alireza Nader of RAND. "We've built a lot of leverage on the nuclear crisis; let's use it."

US legislators are partial to piling on more sanctions because it has a high political payoff in terms of satisfying lobbying groups and most members “don’t believe that any president is going to make a difference in Iran,” the congressional staffer said.