Al-Qaeda in Iraq may be behind an attack on four cargo trucks carrying highly flammable material from Iraq to Syria on June 2. 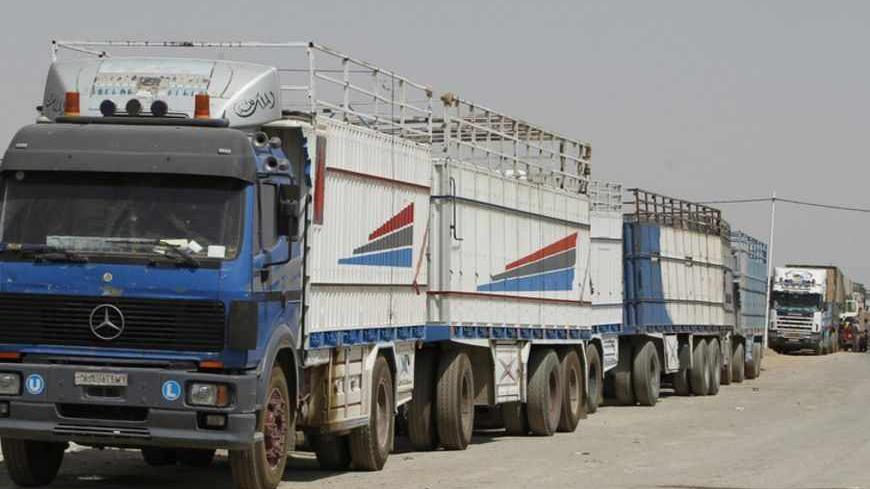 Syrian trucks are parked near the gate at the Rabia border crossing, the main border post between Iraq and Syria, July 24, 2012. - REUTERS/Thaier al-Sudani

On Sunday morning, June 2, a convoy of four Syrian trucks loaded with highly flammable material was attacked 500 km (310 miles) from Baghdad. Three trucks were burned and their drivers killed. The fourth truck managed to escape.

The attack raised questions about the kind of help that Baghdad is providing Syrian President Bashar al-Assad’s regime, which an armed opposition has been trying to topple for more than two years.

According to sources at the Iraq-Syria al-Waleed border crossing in Anbar province, the volume of trade between the two countries has fallen by about 80% from what it was before the start of the armed conflict in Syria. That estimate agrees with that of the Iraqi Central Bank made in mid-2012.

Fouad Al Dhouib is the managing director of the Al Dhouib overland shipping company, headquartered in Ramadi. He told Al-Monitor that his company has diverted its shipping lines from Syria to Jordan about a year ago because of the security situation. “Our company is not the only one that stopped sending cargo to Syria. Maybe all Iraqi companies have done so,” he said.

There is a contract between the Iraqi Health Ministry and the Syrian Pharma drug company. The company’s manufacturing plants are in central Damascus, which till now has not seen any violence, so the company has been able to continue production and meet its obligations to Iraq.

On Sunday morning, about 3 km (1.8 miles) from the al-Rabta police checkpoint in Anbar, unidentified gunmen believed to belong to al-Qaeda attacked the truck convoy with rocket-propelled grenades. An al-Ramadi police source told Al-Monitor that the convoy was going from Baghdad to Syria and consisted of four trucks. The source said that three of the four trucks were burned and their drivers killed while the fourth truck managed to escape toward the border.

Anbar, whose main city is al-Ramadi, is a Sunni-majority province. Most of its population supports the armed revolt in Syria against the Assad regime. Anbar was the location of a large armed revolt against the US military presence, which started in 2003.

About six months ago, Anbar and other Sunni-majority provinces were the scene of large demonstrations against the policies of Prime Minister Nouri al-Maliki, whom the Sunnis accuse of supporting Assad.

The source said that the gunmen stopped a small vehicle accompanying the Syrian convoy and took its five Iraqi passengers — three civilians and two policemen — to an unknown location. The source added, “The fire consumed the three trucks very quickly, which raised questions about what kind of highly flammable material they were carrying. ... We have not seen a Syrian truck transporting goods from Baghdad to Syria in months. The few Syrian trucks that cross the border to Iraq return to Syria empty. ... The smoke plumes that rose from the attack made us think that a tanker truck carrying fuel was hit. But when we reached the site, we found cargo trucks, not tanker trucks.”

The source confirmed that the Iraqi army’s 7th Brigade, which is deployed in the vicinity, surrounded the site and prevented local police from approaching.

The source thought it likely that the attack was carried out by al-Qaeda: “[Al-Qaeda] distributed leaflets in al-Ramadi on Friday afternoon [May 31]. The leaflets said that any truck moving from Iraq to Syria will be targeted to cut off the aid being sent by Tehran and Baghdad to the Assad regime. ... The leaflet asked the local police to stay away from any truck carrying goods from Iraq to Syria.”