Assad Toys With Erdogan Over Riots

Turkish Prime Minister Recep Tayyip Erdogan is losing the high ground in his response to protests. 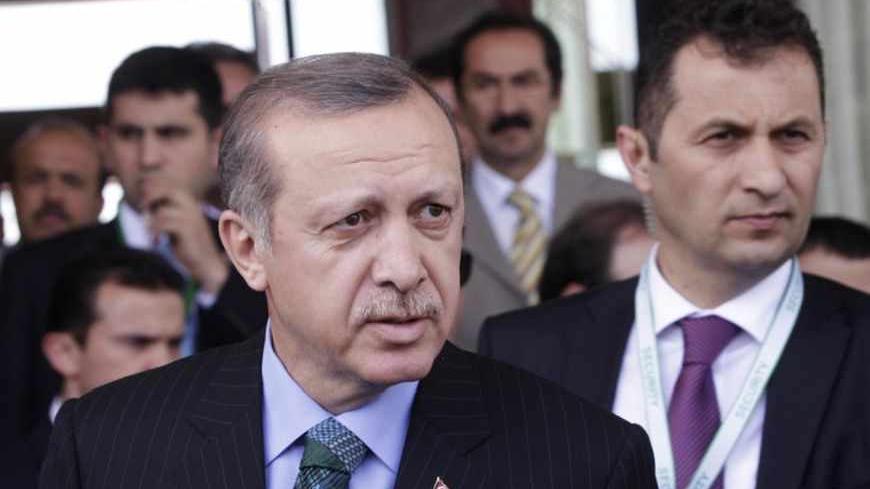 Turkish Prime Minister Recep Tayyip Erdogan arrives at Rabat airport on June 3, 2013, at the start of a tour of the Maghreb region. - REUTERS/Youssef Boudlal

The nationwide demonstrations and rioting following the brutality by Turkish police last weekend toward demonstrators trying to prevent the destruction of age-old trees in Gezi Park, adjoining Istanbul’s famous Taksim Square, could not have come at a better time for Syria’s internationally beleaguered president, Bashar al-Assad, and at a worse time for his nemesis, Turkish Prime Minister Recep Tayyip Erdogan.

There is of course no immediate comparison between the two situations given that tens of thousands have been killed while hundreds of thousands, if not millions, have been left homeless as refugees in Syria. That, however, did not prevent members of the Assad regime from immediately trying to capitalize on the violence in Turkey to propagandist advantage.

In a June 3 statement carried by Reuters, the Syrian Foreign Ministry, in what must be considered the height of cynicism, cited the “the violence practiced by Prime Minister Recep Tayyip Erdogan against peaceful demonstrators” and warned Syrians against traveling to Turkey for the sake of their own safety. A day earlier, Syrian Information Minister Omran al-Soubi had called on Erdogan to step down, indicating that the Turkish people did not deserve such “barbarity.”

Reuters quoted Soubi as saying, “The demands of the Turkish people don’t deserve all this violence,” and adding, “If Erdogan is unable to pursue non-violent means, he should resign.” Syrian officials must be aware that this is highly transparent tit-for-tat given that their remarks echo what Erdogan called on Assad to do when Syrian demonstrators took to the streets of Damascus in March 2011.

Erdogan and Foreign Minister Ahmet Davutoglu’s line from the start was to call on Assad to listen to the voice of the streets and desist from violence against peaceful demonstrators. Meanwhile, an increasingly tempestuous Erdogan, who once referred to anger as “a means of oratory,” could not be too happy upon learning that Middle East dailies have started running opinion pieces suggesting he is “going the Assad way.”

“Erdogan could easily have answered the concerns of the park’s supporters by saying that the project was open to discussion. But just like Assad, he is blaming extremists for stoking dissent,” according to Linda S. Heard, writing for Gulf News on June 3.

Pointing out that Erdogan is also blasting “the preaching of foreign governments” that have been calling on his government to exercise restraint, telling them that “they should first look at their own countries,” Heard noted that this was just the sort of thing Mubarak, Moammar Gadhafi and Assad "were saying all along."

Erdogan appears especially angry at Washington over its critical remarks concerning the developments in Turkey. The Washington Post reported on June 2 that during a joint press conference with the Polish foreign minister, Secretary of State John Kerry had told reporters at the State Department that the United States supported “full freedom of expression and assembly, including the right of people to peaceful protest, because that is fundamental to any democracy.”

Kerry went on to say that the Obama administration was “concerned by the reports of excessive use of force by police,” adding, “We obviously hope there will be a full investigation of those incidents and full restraint from the police force with respect to those incidents.” He also indicated that the US ambassador in Ankara had been instructed to convey this message to the Erdogan government.

Erdogan’s response to such international criticism, which has also come from the United Nations and the European Union as well as individual European countries, is an echo of Assad’s responses to similar criticism from various countries’ leaders, including Turkey’s. Speaking on June 3 during a news conference at the airport in Ankara prior to departing for Morocco on an official visit, Erdogan not only blamed “domestic extremists” for events in Turkey but also “outside powers who do not want to see a strong Turkey emerge.”

It was not just Kerry who threw Erdogan off balance, much to the pleasure of Assad and members of his regime. In remarks that clearly annoyed Erdogan, Turkish President Abdullah Gul came out on June 3 declaring, “Democracy is not just about elections.” He also offered, “The message of the streets has been received.”

Apart from Assad cynically toying with Erdogan, there are practical advantages for his regime emanating from developments in Turkey. First, these developments divert Ankara’s attention from the Syrian crisis, which is good for Damascus since the Erdogan government has been a principle supporter of those trying to topple Assad and his regime.

Second, they undermine Erdogan’s democratic exhortations to Syria, allowing his critics in the region the luxury of retorting, “Practice what you preach.” Erdogan has of course taken issue with those likening Turkey to Syria today by indicating correctly that he is a democratically elected prime minister, unlike the region’s dictators. This has not, however, prevented Erdogan’s domestic and foreign critics from using his previous remarks about Assad to turn the tables on him.

On a different and perhaps far more serious level, Turkey provides an example of how social strife can be triggered, like in Syria, as a result of an uncompromising government bent on defying the will of a portion of the population. This has nothing to do with the question of whether Turkey is a democracy.

In addition, the brutality of the Turkish police — who in the past were frequently accused of having an inbred ideological hatred of leftists, liberals and Western-oriented secular democrats — shows that with the right amount of flexibility provided by the powers that be, Turkey’s security apparatus is potentially no less cruel than Assad’s against unarmed demonstrators and civilians, with scant regard for women, children, the aged or the infirm.

Another warning, in particular, from Syria for Erdogan involves his highly irresponsible remarks to the effect that if he wanted, he could send a million of his supporters into the streets and that he is having difficulty restraining the 50% who voted for him from taking to the streets. Syria should provide a warning to him of where such feckless remarks can take a country, whether it is a democracy or a dictatorship.