Israeli Prime Minister Benjamin Netanyahu is reeling from the loss of Mahmoud Ahmadinejad as president of Iran and a recent poll signaling Israelis are tiring of settlement policies. 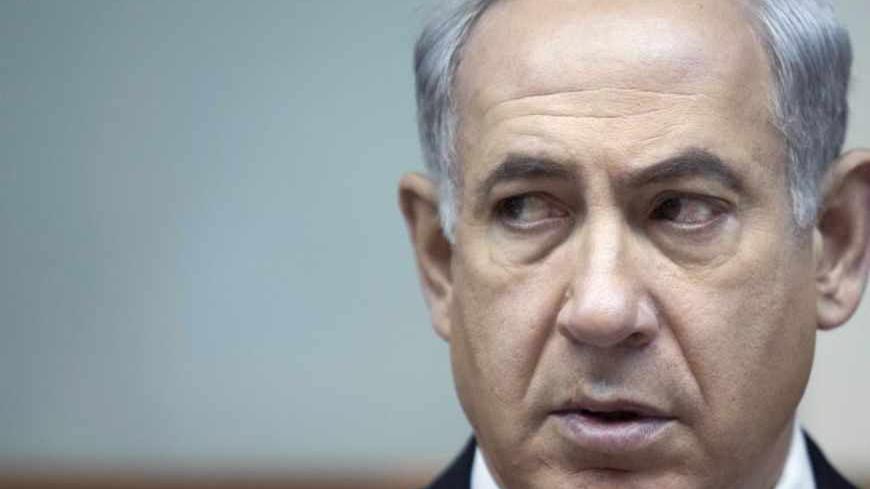 It’s no wonder Prime Minister Benjamin Netanyahu did not even try to hide his disappointment at Hassan Rouhani’s victory in Iran’s presidential elections.

The replacement of “the modern-day Hitler,” as he had described [outgoing Iranian President Mahmoud] Ahmadinejad on one of his visits to the United States (2008), with a leader considered moderate and pragmatic, has shuffled his deck of “advocacy” cards and left him without a joker. The prime minister will be hard pressed from now on to frighten the Israeli public with “a second Holocaust” and thus deflect its attention from the Palestinian problem.

And apropos the Palestinian issue, Netanyahu has another reason to be disappointed. The annual public opinion poll commissioned by Ariel University in the settlement-turned-city of Ariel, was headlined: “The Israeli public is becoming more pragmatic and veering to the left.” The poll, conducted by polling agency Maagar Mochot in the second half of May among a sampling of the adult Jewish population living within the Green Line, indicates that the right wing has lost its majority.

Netanyahu is not alone. It seems that the findings of the poll have startled also the worldview foundations of HaBayait HaYehudi leader, Economy and Trade Minister Naftali Bennet. Otherwise, it would be hard to explain why during a conference of the Council of Judea and Samaria in Jerusalem [June 17] he chose to say, ''The idea of a Palestinian state is behind us.'' This at the same time when other members of the coalition are calling to renew negotiations with the Palestinians and for a permanent state arrangement.

All which brings us to the surprising findings of the poll:

The poll indicates a substantial increase (from 10% to 23%) in support for a wide-scale evacuation of settlements in return for a Palestinian commitment to end the conflict. Accordingly, there was a commensurate, significant decline (from 46% to 24%) in the unwillingness for territorial ''compromise'' [the quotation marks are in the original text — A.E.] of any kind and in the percentage of those supporting full or partial annexation of the territories.

The following findings indicate a clear trend of decline in support for the “settlement enterprise” and in the prestige of the settlers:

The researchers, who have been carrying out the annual study for five years, are Udi Lebel, chairman of the Department of Sociology and Anthropology at the University of Ariel and Miriam Billig, director of Regional Research and Development in Samaria and the Jordan Valley. In analyzing the survey findings, Lebel discerns a “fertile, public platform for the absorption, consideration and adoption of a new diplomatic plan after years during which consideration of such an experiment was delegitimized.”

Lebel believes the change is rooted in the seeping understanding of “the demographic problem” [the quotation marks are in the original text — A.E.] and adoption of “the various options being discussed in the media for withdrawals, including land swaps in return for maintaining the settlement blocs that have become part of the national consensus.”

In other words, “the territories are there, not here” [contrary to the slogan of the settlers, emphasizing the continuity  of Jewish settling on both sides of the Green Line]. Unlike the campaign launched after the 1993 Oslo Accord, no real affinity has been found between the residents of Tel Aviv’s Shenkin Street and the settlers in the West Bank. Like Netanyahu, the right wing, too, has lost its joker and its only remaining cards are the left wing’s defeatism and inability to translate public distaste for the settlers into hard political currency.

Nonetheless, this is how earthquakes begin — in slight tremors of the joints linking the earth’s tectonic plates, which only finely tuned sensors can detect. Since the summer of 2012, when the battle cries to attack Iran reached their peak and were immediately exposed as nothing more than hot air, and even more so during the last elections last January, there is a consistent shift of Israeli public opinion toward the center. This trend was reflected in the eroding power of the Likud party, the appearance of the centrist Yesh Atid Party and the integration of Justice Minister Tzipi Livni into the new cabinet as leader of the negotiating channel with the Palestinians.

The explanations for this phenomenon are two-fold. First of all, the public finally understands the connection between its economic plight and the continued nurturing of the settlements and attendant handling of the conflict with the Palestinians. The public probably understands that the “equal burden” spin of the last election campaign, according to which the root of all evil lies in the economic-social arena, is self-delusion and dangerous repression.

Secondly, the ideological right wing has been in the process of an internal, political split for a decade. Ask yourself, for example, what all these public figures have in common: former Prime Ministers Ariel Sharon and Ehud Olmert, Tzipi Livni, former Knesset members Roni Milo, Michael Eitan, Ronnie Bar-On and Dan Meridor, current Knesset Members Tzachi Hanegbi and Meir Sheetrit. All of them were at one time the aristocracy of the Likud and of its predecessor, the Herut Party, raised on the idea of “a greater Land of Israel”; all of them traded in that ideology for the idea of partition [two state solution]. Several of them even adopted, in one fashion or another, the Arab Peace Initiative as a basis for an arrangement ending the entire Israeli-Arab conflict.

When the late Prime Minister Menachem Begin was called upon to decide on a withdrawal from the Sinai [1979], and when Sharon formulated the plan to withdraw from the Gaza Strip [2005], their friends from the hawkish, ultra-right wing challenged their leadership. Today, this wing is preparing itself for the possibility that Netanyahu will opt for the Begin-Sharon approach over the do-nothing approach espoused by the late Prime Minister Yitzhak Shamir. Defense Minister Moshe ''Bogie'' Ya’alon has already positioned himself at the head of this camp, lifting up the banner of mutiny against the “land for peace” formula and encouraging the belief that the Israeli-Palestinian conflict is insoluble in the foreseeable future.

If the prime minister dares adopt the plan proposed by US Secretary of State John Kerry for resumption of negotiations with the Palestinians, “Bogie” will not hesitate to do to Bibi [Benjamin Netanyahu] what Bibi himself did to the late Prime Minister Yitzhak Rabin 18 years ago, following the signing of the Oslo Accord (in a procession held in Netanyahu’s presence in the city of Raanana, several weeks before Rabin’s assassination, protesters carried a coffin inscribed with the words, “Rabin is killing Zionism”).

As far as Ya’alon is concerned, a disintegration of the Likud party and its transformation into a right-wing, rejectionist entity under his leadership is a strategic move. His first move was putting spokes in the wheels of the reconciliation plan which Netanyahu reached with Turkey more than a year ago. The next was his objection to the formula proposed by Science Minister Yaakov Perry for drafting the ultra-Orthodox. The peak, so far, was his statement this weekend [June 16] that the Arab Initiative was no more than a “spin.” This, several weeks after Secretary of State Kerry sang its praises in a joint news conference with Qatar's prime minister.

In the coming days, Netanyahu will have to choose between a daring decision to climb the mountain and adopt Kerry’s plan, which is based on the Arab Initiative, and spinning his wheels on the slippery slope of the conflict. An opinion poll commissioned by the NGO ''Yisrael Yozemet'' and published by Al-Monitor several weeks ago showed that if Netanyahu picks the first option, seven out of 10 Israelis (69%) will support him. The surprising poll commissioned by the University of Ariel confirms that Israel is no longer the land of the right-wing.

By the way, for Bibi’s edification – the poll indicates that the Iranian threat has the smallest influence of all on the public’s stands regarding the desired solution of the conflict with the Palestinians.