In view of the new austerity plan, Knesset Member Itzik Shmuli and his followers from the social justice movement are about to take to the streets again in protest, reports Mazal Mualem. 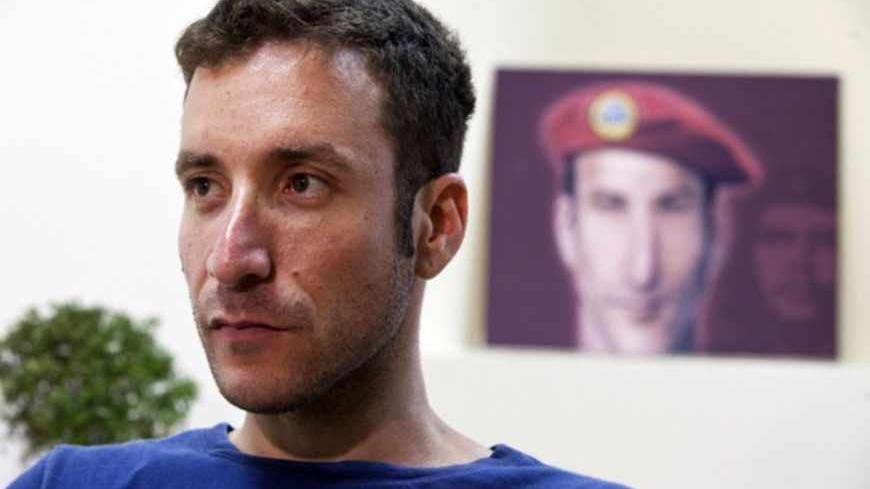 Itzik Shmuli is seen during an interview with Reuters in Tel Aviv on Aug. 29, 2011, when he was head of the National Union of Israeli Students and one of the leaders of Israel's social protest movement. - REUTERS/Nir Elias

"Is the social protest movement coming back?" I asked Knesset Member Itzik Shmuli, who was one of the turbocharged engines that propelled the social "tent" protest of the summer of 2011 and whose climax saw hundreds of thousands taking to the streets.

We sat down for a cup of coffee at the glistening white plaza by the Habima National Theater in the heart of Tel Aviv. Some 50 yards away, at the far end of Rothschild Boulevard is where the first tent, which triggered the upheaval in Israel, was pitched. Or so we thought at the time. Thousands swarmed the boulevard. In one of those tents was Shmuli, who motivated the masses. I specifically recall his speech about the "New Israelis" during the "one million rally," which was held at the Kikar Hamedina Tel Aviv central square and attended by an estimated crowd of some 300,000 to 500,000 demonstrators. Back then, he was chairman of the National Union of Israeli Students. "A leader was born," the press proclaimed the following day.

Nearly two years have passed. What's left of the protest that changed his trajectory, turning him into a politician? What's left of Shmuli's revolutionary passion?

It's May 9 and the attacks on Finance Minister Yair Lapid are peaking. The social networks are abuzz with frustration and rage at the new finance minister, who has dealt harsh blows to the middle class. Nearby, a few young mothers are staging an off-the-cuff demonstration that doesn't take off.

Shmuli actually says that he feels that the public is ready to set to the streets again. On Saturday night, May 11, he intends to show up at a large rally here that is expected to jump-start the protest — but this time around as a Labor Party Knesset member. He says he feels like a fish that's back in the water: "On Saturday night I will demonstrate here wearing a T-shirt, and on Sunday I'll put on my dress shirt and fight at the Knesset plenary."

Has the protest failed?

"We have to honestly say that the protest had no impact on housing prices, the bill at the grocery store or the prices of utilities. This is something we did not accomplish. Yet we did accomplish something important: changing the mindset of Israelis. All of a sudden they believe they can make a difference, and they set to the streets. It happened just recently with Bank Leumi, [with its decision to write off the huge debts of business mogul Nochi Dankner that was retracted following fierce public criticism]. It also happened with the tuition fees that were going to be hiked. In Lapid's case, this is doubly true. Judging by his conduct, he 'counts' only those in his immediate vicinity. So perhaps he thinks that the public's anger can be mitigated through Facebook posts, but in the end we're talking about real life."

Isn't it too late to protest? The elections are over and there's a finance minister.

"The struggle over the budget and the 'Arrangement Law' is only starting now and will last for several weeks at the very least. So waiting with the protest was the right thing to do. Now the public can say: 'We gave the new finance minister a chance. Now it turns out that the person who promised to protect the middle class and set 'red lines' to the prime minister in his 'Bomb Address' has become his executive contractor. He came back with the same plan which got us to the elections in the first place.' [Prime Minister Netanyahu could not pass this budget during the previous Knesset.] So the public has every right to protest. What's odd is that after all of Lapid's talk about 'putting the working man in the center,' he really is in the center — smack in the bull's eye."

You've met with Lapid in the past. He wanted you to join his party. Now you're political rivals. What's he like?

"He asked to meet with me. It was after the protest and the big rallies. The meeting was about ideological matters. He didn't even put any concrete proposals on the table, but wanted to talk about the things in Israel that disturb him. He said things I could identify with. The public identified with the things he said. That's a fact. That's why he is a great disappointment."

Shmuli then adds: "It was already during the election campaign that I thought that the public was being led by the nose. Many people heard what they wanted to hear and it backfired."

But maybe he really didn’t know how big the budget deficit was? When you take on the job, things look different then. Give him a chance …

"From a factual standpoint, that's not true. For the last 18 months we've known that Israel has a budget hole. Former Finance Minister Yuval Steinitz cautioned us about this at the beginning of the year. So we have either one of two options:  Either Lapid knew what the situation was like and was able to convince the public to vote for him by making inaccurate statements — to put it mildly, or that he didn't take the trouble to check out the facts. Either way — that's wrong.

"Yair is a wiz at taking complex problems and issues and summarizing them into very clear and simple bottom lines. Now the radio keeps playing his speech about the 'old politicians in a cigar smoke-filled room, and when they walk out they have the middle class in their crosshairs.' And what did he do? He sat with those who can threaten his position, clinched a deal with them, and in the end he plans to hurt the middle class."

He's been in office only six weeks, isn't it too early to pass judgment?

"From an ideological perspective, Yair Lapid misled the public. And that's a fact. He told the public he believed in one thing, and now he does something completely different. You can't speak on behalf of the 'working man' and at the same time raise the VAT and income taxes, cut social services and make life harder for the elderly.

"It's true that he didn't create the deficit, but as soon as he agreed to deal with it, it's perfectly legitimate to come complaining to him.

"Even this deficit isn't some bolt out of the blue. It's a very clear outcome of an economic and social plan, against which he set out with all his might, but now he's back to implement it with some minor cosmetic changes. Levying luxury tax on furs and yachts [as Minister Lapid did] isn't serious."

Which of Lapid's moves do you find the most vexing?

"The adverse impact his moves would have on the elderly. I focus on this because it embodies the greatest degree of cynicism. After all, 25% of them live below the poverty line. And these are figures provided by the Bank of Israel. For all intents and purposes, the Treasury haunts them all the way to the grave. An infirm old man — what does he have left in life? I ask Lapid: 'Of all the places where you've searched high and low for money — you couldn't find it anywhere else?' I intend to fight it tooth and nail. I will go with the elderly to the streets."

It's very frustrating this story of the protest and its demise ... Has nothing changed?

"We have changed. Just watch the Knesset deliberations: Everyone, bar none, talks about 'social justice.' The sight of half a million people taking to the streets was branded in everybody's consciousness, and that deters the political establishment. What we will do in the Knesset is a complementary process."

"The public now has a deterrent vis-à-vis the politicians," Shmuli underscores.

You've relocated to the city of Lod. Has this helped you be a better Knesset member?

"In Lod, I run into all of Israel's social plights in my own building's staircase."

What would you tell Lapid if you were to meet with him now?

"I would simply replay his speech on the old politicians."