New Generation of Political Stars Under Spotlight of Israeli Elections

The new generation of young Israeli political stars will be tested in the current campaign and beyond, writes Mazal Mualem. 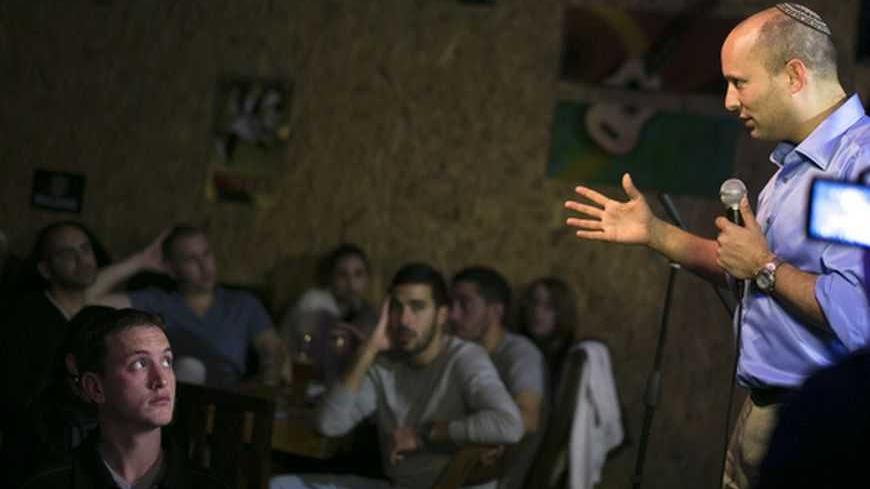 Naftali Bennett, head of the Beit Yehudi (Jewish Home) party, campaigns at a bar in the southern city of Ashdod Dec. 27, 2012. - REUTERS/Amir Cohen

One of the campaign ads for the Labor Party shows the leaders of the social protests, Stav Shaffir and Itzik Shmuli, sitting opposite each other against a neat blue background, nostalgically reminiscing about the mass protests of summer 2011. These were the protests that transformed them from unknown social activists to media stars.

Eighteen months after the protest that shook the nation — the one that began with a single tent pitched on Rothschild Boulevard in Tel Aviv and ended with thousands of tents down the city's main streets and hundreds and thousands of young people blocking streets and filling the town squares to protest the high cost of housing and more — Shaffir, 27, and Shmuli, 32, now have a very real shot at being elected to the next Knesset on the Labor Party ticket.

At the end of the ad, they express their hope that "what started in the streets will continue at the polls." There is no doubt that Shaffir and Shmuli will join the Knesset with a clear agenda, energy to perform and strong public-speaking skills. They are filled with good intentions and avow that they decided to enter the political scene after learning the hard way that "politics was the only way they could make the world a better place."

Only through politics? To be fair, we need to say that many of the young people who dedicate their time to bringing about change have another opinion — one that is diametrically opposed. The most outstanding example of this belief is Daphni Leef, who Shaffir and Shmuli know well. After all, the three of them fought shoulder to shoulder in the leadership of the social-justice protests and marched in the front row of each demonstration. Daphni Leef believes that you can only bring about change from outside the system. As she sees it, as soon as you become part of it, you lose your authenticity. That is why she established a new social organization to try to change things from the outside, and even threatened to closely monitor the political activity of her fellow protesters, "without cutting them any slack."

The big difference between the two approaches cannot be reconciled. On the one hand, the largest social protest in the history of Israel was extra-parliamentary (in this context, recall the cases in which politicians who came to show support were thrown out of the camp). On the other hand, others would say that this was actually its downfall, that the problem was that nobody knew how to politically leverage the critical mass that drove hundreds of thousands of people (most of whom were young people, who did not own homes, but there were also many older people who were in the same situation) to take to the streets in different cities.

Shaffir, Shmuli and others opted to go the political route, which is all well and fine, but will an agenda and good intentions alone be enough to make them effective members of Knesset, considering their lack of experience and facing a well-oiled parliamentary machine they are unfamiliar with? Will they be able to implement their plans for affordable housing and promoting a just distribution of social obligations?

For this to happen, you must first understand that politics is first and foremost a profession. Shmuli and Shaffir can only be outstanding members of Knesset if they learn the political jargon, secrets of parliamentary wheeling and dealing and how to be flexible enough to bring political adversaries on board to pass joint legislation.

And here, I have some advice for them as well as for the others who are taking their first steps in the political arena: You would do well to take a look into the past at the "old politics," and despite how much you dislike this concept, don't be afraid to learn from those who burst onto the political scene when they were young and lived to tell the tale.

Thanks to this "pre-parliamentary preparation course," the three of them were able to become stars fairly quickly. They got processes rolling and set an agenda through legislation and political action they led.

In contrast, the young people who will be elected to the next Knesset — regardless of how talented they may be — will have taken the short route. Much like reality stars, they are propelled forward by the tailwind of the largest popular protest in the history of Israel, a protest that gave them valuable publicity and public admiration that will have essentially paved their way into the Knesset.

Shaffir and Shmuli will be the youngest members of the 19th Knesset. They represent the changing of the guard, a new generation in the long-standing Labor Party. Incidentally, Shelly Yachimovich's election as the leader of the Labor Party, which involved the defeat of a long line of more experienced men, is part of the same trend.

The trend, which has already been dubbed "A Politician is Born,"is not limited to the left. Instant stars have also been born among the right-wing parties. One of them is HaBayit HaYehudi. The well-established party, the successor of the Mafdal (the National Religious Party), was about to disappear off the political map and brought back to life by Naftali Bennett, 40, who was only elected to lead it about four months ago, and since then has become a big name in the elections, with many in the religious Zionist camp following him.

Alongside Bennett is his ideological partner, Ayelet Shaked, 36, who also gained prominence back when they worked together in Prime Minister Benjamin Netanyahu's office. Together, they are the young and promising faces of the party on the election billboards.

While Bennett and Shaked, much like most of the Zionist stream, did not play an active part in the social protests, to a great extent they have been thrust to the fore on the coattails of change and vitality, on their way to capturing the party from the "old-school wheeler dealers."

"Something new is happening" is HaBayit HaYehudi's campaign slogan, accompanied by the young and smiling portrait of Bennett, a graduate of the General Staff Reconnaissance Unit of the IDF and a high-tech millionaire. "He is the future," says the slogan, and it's resonating with many people. There's good reason why HaBayit HaYehudi is considered the party with the youngest supporters — most are between the ages of 18 and 30.

But Bennett is actually a political neophyte. If the actual results are close to the polls, he will find himself at the helm of a party with at least 15 seats in the Knesset. This is a formidable task which ideally should be only assigned to someone with knowledge and experience in the practice of politics. Otherwise, they may end up crashing.

This also holds true for the chairman of Yesh Atid, Yair Lapid. Although he is eight years older than Bennett, like him, he enjoys strong support among young people and has also appeared at center stage on the political scene lacking political knowledge.

Therefore, we could say that the 2013 elections are the biggest test for young people. Success is within their reach, but it won't be easy. After all, the Knesset is filled with very well-seasoned people, who long ago forgot what the newcomers have yet to learn.