The budget cuts did not spark mass participation during the demonstration on May 11, but Finance Minister Yair Lapid should not count on the public staying idle, writes Mazal Mualem. 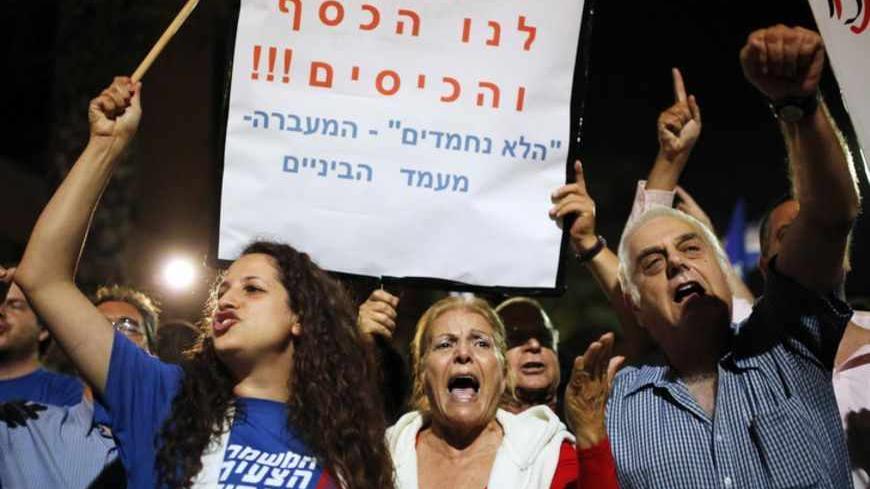 Potesters demonstrate against new austerity measures set to be included in the 2013-2014 national budget at a main junction in Tel Aviv, May 11, 2013. - REUTERS/ Amir Cohen

The middle class stayed home on Saturday night [May 11]. The public did not swarm the streets in an authentic display of anger at the harsh budget cuts thrust on them by Finance Minister Yair Lapid; people did not demonstrate in droves against the election campaign commitments violated willy-nilly by the same man in whom they placed such hopes just four months ago and who now explains to them, with great aptitude, why “he had no choice.” The demonstrations, which were supposed to jump-start a public protest, do not have a leadership for the time being and it is uncertain if one will emerge. Itzik Shmuli and Stav Shaffir, the vibrant young protest leaders who captured the public imagination in the summer of 2011, are now members of the Knesset, representing a strife-ridden opposition party with little influence.

In hindsight, Lapid and Trade and Industry Minister Naftali Bennett were the political leaders of that protest; they were carried on its back like rock stars to their seats in the Knesset and the government. Now that they have been appointed as finance minister and minister of economics, respectively, they are directly responsible for each and every measure against the middle classes.

Of the two, expectations of Lapid were greater and so, too, is the extent of the disappointment in him. From a modern-day savior, he is being gradually exposed as a false prophet. For now, he still appears to be successful in addressing a public sentiment which desperately wants to believe that “the final word has yet to be said” and “better days are just around the corner.” And with the fog of uncertainty and attempts at persuasion hanging over us, it is hard to get people out into the streets.

The 10,000 protesters (or 15,000, depending which paper you read) who nonetheless took to the streets in five flash-points around the country do not even amount to the number of votes which provided Lapid with one of his party’s 19 Knesset seats and sent him to the finance minister’s office. In fact, most of those who marched last night on Tel Aviv’s Rothschild Boulevard, where the protest was born two years ago, are obvious, hard-core “professional” social protesters. They form the organized supporters of left-wing parties such as Hadash, the Labor Party and Meretz as well as representatives of many social change organizations.

A handful of left-wing Knesset members marched alongside them: Merav Michaeli, Itzik Shmuli and Stav Shaffir of Labor, Tamar Zandberg of Meretz and Dov Khenin of Hadash. (All, except for Khenin, are new to the Knesset.)

As long as the other protesters — those who wrote the protest signs in their mortgaged-to-the-hilt living rooms, packed up their children and went out to demonstrate every Saturday night in the summer of 2011 — have not taken to the streets, Lapid can breathe easy.

The vast majority of Lapid’s Yesh Atid voters stayed home yesterday. That is a fact. So did Naftali Bennett’s HaBayit HaYehudi voters. Another fact is that the Saturday demonstrations, which were supposed to oil the wheels of a renewed protest movement, did not leave an impression and failed to create the necessary buzz to get people out of their homes on Saturday night.

Why is that? Is the public who went to vote less than four months ago, and thought it would make a difference, too shocked and battered to understand what is happening? To identify the “bad guys"? To know who to target? And what has happened to Lapid?

The answer to these questions seems simple: for now the proposed cuts, although a slap in the face, are on paper. They are not yet being felt. They will start to hurt when the utility bills, the city taxes on the elderly, the property taxes and the value added tax start to wipe out hundreds of shekels from family incomes. That is when the penny is likely to drop. It will happen soon, and it will happen during the summer vacation, which has already proven an excellent time for social protests.

So Lapid and Prime Minister Benjamin Netanyahu had best not count on the sparse turnout of last night’s demonstrations and conclude that the Israeli public is indifferent. The social awareness of this public has undergone a sea change in the past two years. People understand that they have the power to frighten politicians, bank managers and owners of the large food chains; that may well be the greatest achievement of the 2011 protest.

And one final thought: the Israeli tendency to ''always prepare for the last war'' appears to be a recurring mistake. Perhaps the desire to once again see the exciting scenes of the summer 2011 protest, with multitudes flooding the streets, is mistaken and might even damage the cause. The protest of 2013, even if it is not an exact replica of the previous one, could be no less effective if it breaks out.

Lapid is familiar with the power of crowds. Yesterday’s demonstrations, even if they weren not well-organized and lacked leadership and a clear message, should nonetheless raise a warning flag in front of his eyes.

Mazal Mualem started her journalistic career during her military service in Israel, where she was assigned to the weekly army newspaper Bamachane. After her studies, she worked for the country's second-largest Hebrew-language daily, Maariv. In 1998, she joined the English-language daily Haaretz, covering local governance, and later, she was appointed chief political analyst for that paper. After 12 years with Haaretz, she returned to Maariv as their chief political analyst.