The Downfall of Minister Lapid

Finance Minister Yair Lapid turns strategically, and obsessively, to his main campaign slogan against the ultra-Orthodox, to blur the fact that he has not owned up to his own promises. 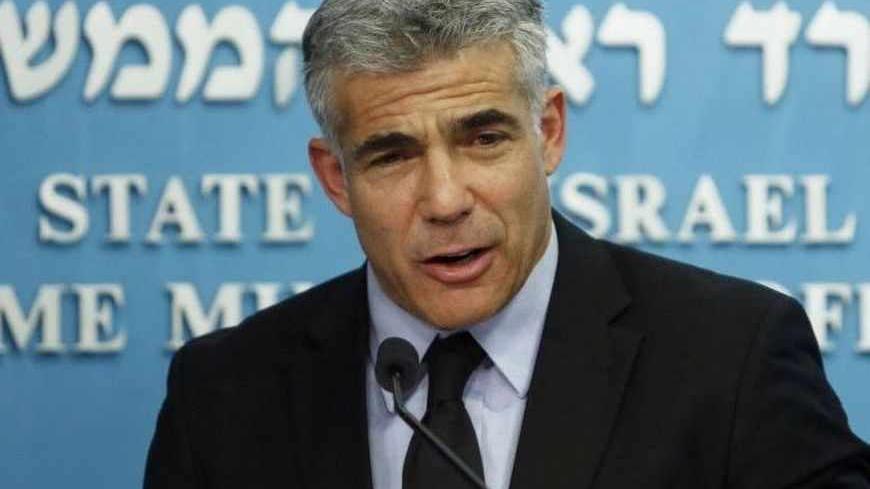 It is hard to remember now, but the issue of the ultra-Orthodox enlistment was by no means on top of the agenda of Yesh Atid Chairman and now Israeli Finance Minister Yair Lapid when he first entered politics and, as a matter of fact, nor was it for a long time afterward. One day in August 2012, Lapid attended a rally coordinated by the leaders of the organizations calling for equal sharing of the national burden, held at the Tel Aviv Museum plaza. Those were the days following the withdrawal from the government of the Kadima Party against the backdrop of Prime Minister Benjamin Netanyahu’s surrender to the ultra-Orthodox factions. At the time, Lapid was barely half a year in politics. The elections were still far off then, and Lapid was losing relevance and declining in the polls. He thus sought any possible way to associate himself with the spirit of the social justice protest and other popular campaigns.

Equal sharing of the burden was considered the day's “hot topic,” which occupied the headlines for some time, and the demonstration called by the organizations advocating equal sharing of the burden was just what Lapid needed. He engaged several dozen Bedouins to act as protesters, dressed them in T-shirts bearing the Yesh Atid logo to create an atmosphere of public support, and set out to take over the ground. Unfortunately for him, the demonstration that he attempted to hitch a ride on turned out to be a flop, and he was accused of having taken advantage of the event to make a political fortune and of driving away the protesters. It was certainly not one of the glorious moments of Lapid’s brief political career.

It was only during his election campaign, when he was stumbling in the polls, that Lapid became aware of the full appeal the struggle for ultra-Orthodox enlistment had for his potential electorate, and he decided then and there to go for broke. Kadima Chairman [and former Defense Minister] Shaul Mofaz looked on in despair as Lapid was taking over his agenda, but he could do nothing about it.

From that time on, whenever the Yesh Atid chairman has found himself sinking to a low point in public opinion polls — which has happened quite often since his appointment as finance minister — he resorted to the same trick, heating up the front vis-à-vis the ultra-Orthodox camp. It may be done by means of a finely honed Facebook post or a well-written Knesset speech. One way or the other, Lapid turns directly to the ultra-Orthodox, accuses them of looting the public coffers and lays on them the responsibility for the budget deficit, while presenting himself as the knight in shining armor sent to undo the damage they have done.

At the end of this month Lapid is about to conclude his first Knesset session. He entered it as the great hope of the new Israeli politics and is leaving it as a big disappointment. The middle class — the sector that granted him a seat in the Knesset, as well as his ministerial post in the Treasury — received in exchange even more taxes and austerity measures, and no hope. Virtually all of Lapid's promises to the middle class have been violated, and it's no wonder then that in recent polls, about a third of his voters said they would not cast their vote for him next time around. The 19 mandates Lapid won in the last election were meant to enable him to realize his campaign slogan: “We’ve come to make a change!” And while the Yesh Atid chairman brought a fresh, young spirit with him, he has failed to make a real change and he cannot point to any significant achievement, whether on the housing plight front or on any other issue related to the welfare and wellbeing of the Israeli middle class.

And what is Lapid actually doing? He is complaining that he inherited a huge budget deficit from the previous government, argues that he has had no choice, and disdainfully dismisses the criticism against him. “Precisely how would you suggest to close a budget hole of 35 billion shekels? Using the wedding checks?” he sarcastically asked his opposition critics in his address to the Knesset this week [July 23] during the debate on the state budget.

However, that’s the crux of the matter. Lapid's voters believed that he would change the method. Alas, he has adopted instead the austerity measures proposed by Treasury officials, which further worsen the situation of his middle-class voters. And he then explains to them that there was no other choice.

The same lack of vision has been demonstrated by Lapid with respect to the diplomatic agenda. For purely electoral considerations, not necessarily justified, he persisted in his efforts to get in with the right, as he was doing all through his election campaign. Lapid refrained from urging Netanyahu to advance the negotiations and, at the end of the day, has had no real effect on the goings-on in the diplomatic arena. And this, notwithstanding the fact that as chairman of a centrist party that has 19 seats in parliament and an electorate that supports, for the most part, the two-state vision, he could and should have played a significant role in this highly important arena.

Lapid, who used to brag in his election campaign that he was the man of the future, quite unlike the old-school politicians, whom he dubbed “yesterday’s men,” has become himself, within a few months, one of them. Lapid promised his middle-class electorate the moon. However, rather than keeping his word, he finds escape in futile skirmishes with the ultra-Orthodox. Now that Lapid is on the decline, Netanyahu can congratulate himself on his successfully accomplished mission, having foiled the plan of his young rival to succeed him at the helm. As far as Netanyahu is concerned, the appointment of Lapid as finance minister has proven to be highly effective.