The attack in Syria may be considered a short term military success, but in the long run it might prove costly, based upon the lessons from previous Israeli military interventions, writes Shlomi Eldar. 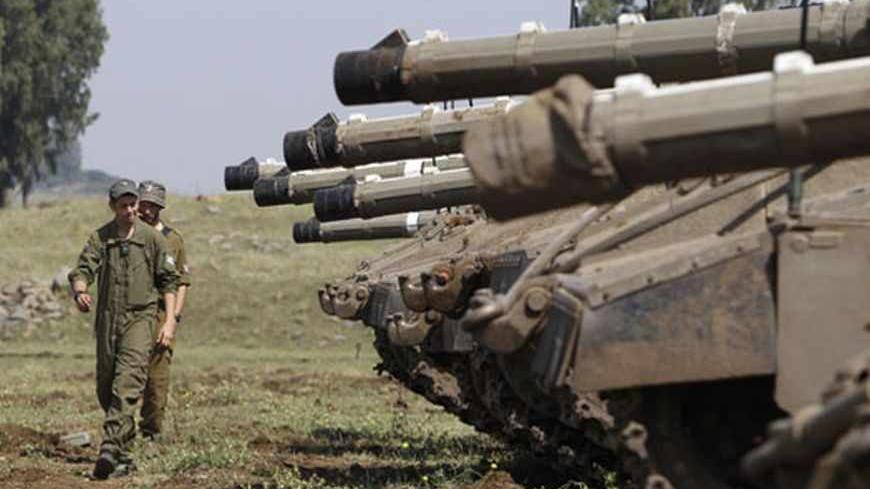 Israeli soldiers walk near tanks close to the cease-fire line between Israel and Syria on the Israeli occupied Golan Heights, May 6, 2013. - REUTERS/Baz Ratner

Even before we know exactly what the Israeli air force’s alleged assault in Syria really achieved, allow me to raise a question.

If reports are correct, the goal of Israel’s decision makers was to prevent Hezbollah from obtaining “game-changing" weapons. If this is the case, I can’t help but wonder: Was it a wise move?

To expand on that: Is Israeli military intervention in the mayhem that is Syria a wise move as far as Israel’s security interests are concerned?

It's doubtful whether at that meeting of the Security Cabinet, which, according to foreign news sources, gave a green light for the operation, the ministers considered the possible long-term strategic impact of such a strike. It is doubtful whether the ministers voiced their opinion about the dramatic impact that such an attack might have on the emerging balance of power in Syria, and if it might actually create a riskier and far more complex situation as far as Israel is concerned.

Were the Cabinet ministers, most of whom lack experience in their new positions, concerned whether military intervention in the seething heart of Syria, with so many conflicting forces at work, might not result in a groundswell of support in unexpected directions — and, as far as Israel is concerned, undesirable directions. In other, clearer terms: Did anyone express an opinion that any effort to curtail the future arming of Hezbollah might create a more bitter, zealous and radical enemy for Israel than Nasrallah’s group now?

There are many lessons from the past:

The Shiite group Amal, founded by the cleric Musa al-Sadr (who later disappeared in Libya), was considered to be the strongest Shiite militia in the Land of Cedars. But that group faced an enormous dilemma when Israel entered Lebanon: Should it fight against the Israeli forces or not. The organization’s leaders stuck to their position that had given Israel’s military prowess, it would be best to take a more passive position, rather than getting into trouble. The resulting rift in the Amal movement led to the founding of Hezbollah.

Yes, the IDF struck a harsh blow against the PLO. It even managed to expel PLO leader Yasser Arafat and his supporters from their safe haven in Beirut. But, at the same time, it also got a new Shiite organization, which was much more complex, better armed and far more radicalized than any Palestinian organization they faced. Later, Israel also had to deal with Arafat and his people in Gaza.

Even Israel’s assassination of Hezbollah leader Abbas al-Mousawi turned out to be the kind of military intervention with implications that Israel regrets to this day. The new leader of the movement, Hassan Nasrallah, was far more militant than his predecessor but also far more sophisticated. It was Nasrallah who gained Hezbollah the status that it currently enjoys in the Middle East arena. Hezbollah’s influence on the balance of political and military power in Lebanon is well known. It seems quite obvious that this is not what Israel hoped to achieve.

Here's another example for you:

When the second intifada erupted in September 2000, Israeli public opinion was led to the “conclusion” that it was vital to strike a devastating blow against the Palestinian entity that Arafat established in the occupied territories. The decision-makers at that time were Prime Minister Ehud Barak, Defense Minister Binyamin Ben Eliezer and Chief of Staff Shaul Mofaz. They had no hesitation about making the decision to lash out at Arafat “before it was too late.” Driven by an almost instinctive fear that the weapons they had would eventually be turned against Israel, they used all the power that they could muster to destroy his armed security forces. Former Prime Minister Ariel Sharon, a man known to have loathed the “rais” [leader], completed the task later on. The result of this was the rise of Hamas.

Everybody knows what happened next. That radical organization won the 2006 elections in the Palestinian Authority. The “Kingdom of Hamas,” or “Hamastan,” as it's known in Israel, was established in Gaza. In retrospect, one can only ask: Wouldn’t a well-established Fatah regime in the occupied territories have been preferable?

This too, of course, is a rhetorical question.

It always follows the same pattern. The idea of just sitting there is anathema to the Israeli leadership. They believe that they must intervene and bring about a change in the balance of power. That is exactly what is happening in Syria today.

On the face of it, the decision to attack the shipments of missiles being sent to Hezbollah seemed like a reasonable response. Ostensibly, Israel could not allow such “game-changing” weaponry to fall into the hands of Hezbollah.

If, however, we were to consider the undesirable implications of all these aforementioned military interventions, would we still reach the conclusion that the most recent move was necessitated by the reality we faced? We may know the past, but we refuse to learn from it. If we did, we would have realized that sometimes it is better to bide our time and see where things are heading, before we try to change the situation.

It already seems clear, and much has been written about it by Al-Monitor, that cells from radical Islamist organizations have already infiltrated the forces fighting against Syrian President Bashar al-Assad's regime. It's still too early to state unequivocally what their role, power and influence might be in the Syria of the future.

Nevertheless, before any decision to attack Syria was made, Israel’s decision makers should have asked one major strategic question: How likely is it that military action in that deadly swamp known as Syria will result in even greater unrest and bring more fundamentalist forces to the country to feed off the chaos?

We have already noted how one can assume that the attack was intended to stop the supply of “game-changing” weapons to Hezbollah. Still, no one can state with absolute certainty that this is not the beginning of some other “game-changing” transformation in Syria, perhaps even one that weakens Hezbollah somewhat, but also boosts those very forces which, when compared to Nasrallah, would make him look like a kind kindergarten teacher.