Without a change in its Syria policy, it will be impossible for the Erdogan government to pull out a win, writes Semih Idiz. 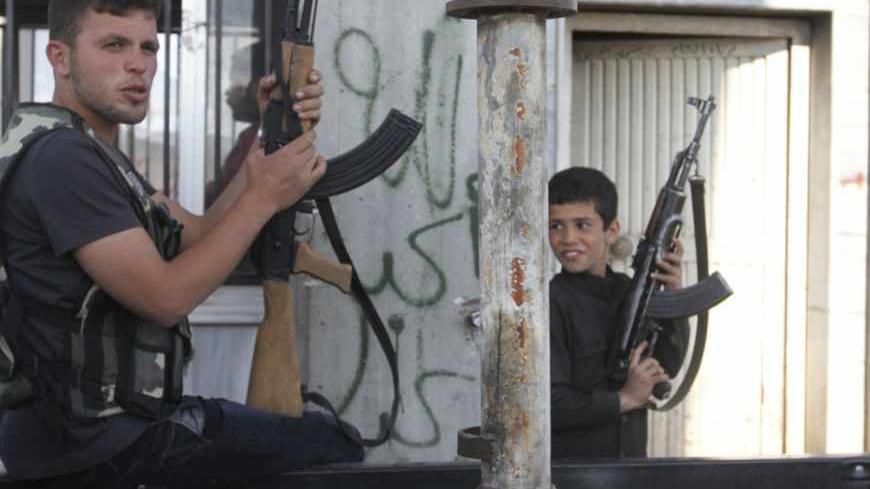 A Free Syrian Army fighter and a boy hold up weapons on a street at the Syrian town of Tel Abyad, near the border with Turkey, April 23, 2013. - REUTERS/Hamid Khatib

As the Syrian civil war enters its third year, evidence is mounting that it will be difficult for Turkey to surgically extricate itself from the crisis while retaining any advantages gained. The chilling statement by Lebanese Hezbollah leader Hassan Nasrallah on May 1, as reported by Al-Monitor’s Ali Hashem in Beirut, not only raises the stakes for Ankara, but also suggests that Turkey could face animosity in a region where it once hoped to play a stabilizing role as a soft power.

A number of analysts in the region believe that Turkish Prime Minister Recep Tayyip Erdogan and Foreign Minister Ahmet Davutoglu’s approach to the Syrian crisis has put paid to Ankara’s desire to be an impartial regional force for good. Turkey has not only been a strong supporter of the Sunni-led Free Syrian Army, but also of radical Sunni groups, like the al-Nusra Front, which aims to topple Syrian President Bashar al-Assad through military means and which Shiites increasingly view with fear and enmity.

Detecting a strong Sunni bias in the Erdogan government’s Syria policy, Shiites across the Middle East are also increasingly looking at Turkey as a country in that camp. This was discernible in Nasrallah’s speech, during which he warned, "Syria has real friends in the region, and the world will not let Syria fall into the hands of America, Israel or takfiri [radical Islamist] groups." As Hashem put it in his Al-Monitor report, “It was as if Nasrallah was warning the opposition and its regional and international backers that the war is no longer between Syrian President Bashar al-Assad and the rebels, but a regional war fought in Syria.”

To no one's surprise, Nasrallah’s statement raised eyebrows in Ankara, where the concern is that the sectarian war in Syria will eventually spread to Lebanon. This prospect appeared to be one step closer following Nasrallah’s accusation that the Lebanese state had failed to protect its citizens in towns near the border with Syria where clashes have been reported between anti-Assad forces and Hezbollah elements.

Prospects grew even dimmer when former Lebanese prime minister Saad Hariri, a leading Sunni figure and close friend of Erdogan’s, slammed Nasrallah in a statement carried by the Lebanese news portal Naharnet. Hariri castigated the Hezbollah leader for “announcing that the Lebanese state does not exist, and the Syrian regime's continued existence is more important than the existence of Lebanon.”

Despite its concerns about the crisis spreading to Lebanon, Turkey continues to lobby for international intervention against the Assad regime and was momentarily encouraged when US Defense Secretary Chuck Hagel suggested that the Syrian army may have used chemical weapons against civilians. Talking to CNN Türk on April 18, Davutoglu called for a UN mission to Syria to investigate the reports, which he said should not be buried.

The Erdogan government is deeply frustrated with international inaction against the Assad regime and was disappointed again when President Barack Obama announced on April 30 that there was evidence that chemical weapons had been used during Syria's two-year conflict, but that it was not yet known how or when they were used or by whom.

Turkey’s uncompromising stance against the Syrian regime has not only angered Hezbollah, but has had the same effect in predominantly Shiite Iran and the Shiite-led government of Iraq, not to mention among Shiites communities across the Middle East. This position is untenable if Turkey wants to become the regional player that Erdogan and Davutoglu desire.

The Brussels-based International Crisis Group (ICG), with its latest report on the Syrian crisis, has added weight to calls that Ankara abandon its policy of putting all its eggs in one basket concerning Syria. “Turkey must stop betting its reputation on a quick resolution of the Syria crisis, and make some long-term changes of emphasis. In order to talk to all parties from a position of greater moral authority, it should avoid projecting the image of being a Sunni Muslim hegemon,” the report offered.

The document, “Blurring the Borders: Syrian Spillover Risks for Turkey,” also maintains that 300,000 Syrians have taken refuge in Turkey to date and that this figure could treble in 2013 and prove to be unsustainable. The report also warns that ethnic and sectarian tensions in Syria could spill over into Turkey’s Hatay province, “where more than one-third of the population is of Arab Alevi descent and directly related to Syria’s Alawites.”

Meanwhile Turkey continues to be in the bad books of Lebanese Shiites after a group of their coreligionists were abducted a year ago near Aleppo while traveling back to Lebanon from a pilgrimage to Iran. The families of the abducted are charging that the perpetrators belong to a group supported by Ankara, and they have been demonstrating outside the Turkish Embassy and Turkish Airlines offices in Beirut.

The English-language Daily Star reported on April 30 that Lebanon’s caretaker interior minister, Marwan Charbel, had announced that the country’s General Security chief, Maj. Gen. Abbas Ibrahim, will soon be traveling to Turkey to follow up on the case. “Turkish authorities can offer a lot of help in this case, and we hope it will raise its level of cooperation, which has been present ever since the beginning of this crisis,” Charbel was quoted saying. He was clearly trying to be diplomatic, appeasing the families of the abductees while being careful not to overly irritate Ankara.

The Erdogan government has been saying that it is doing everything in its power to locate the hostages and obtain their release, but it thus far has failed to convince the family members of the abducted of its sincerity. This episode is yet another example of how Ankara has lost credibility among the region's Shiites.

Considered by a large segment of the Middle East’s population to be inflaming sectarian divisions in the region, faced with the potentially destabilizing effects of  hundreds of thousands of Syrian refugees, and now faced with indirect threats from Hezbollah, it is not clear how Ankara can turn this increasingly dangerous and muddled situation to its advantage — unless, that is, it makes the “changes of emphasis” in its Syria policy called for by the ICG. The Erdogan government does not yet appear ready to do this, but its “winner take all” policy means Turkey risks finding itself in a “lose-lose” situation when the Syrian crisis finally ends.