An exchange of fire between Israel and Syria on the Golan Heights raises the question of whether Damascus has adopted a new policy toward Israel and the possibility of an active Golan front. 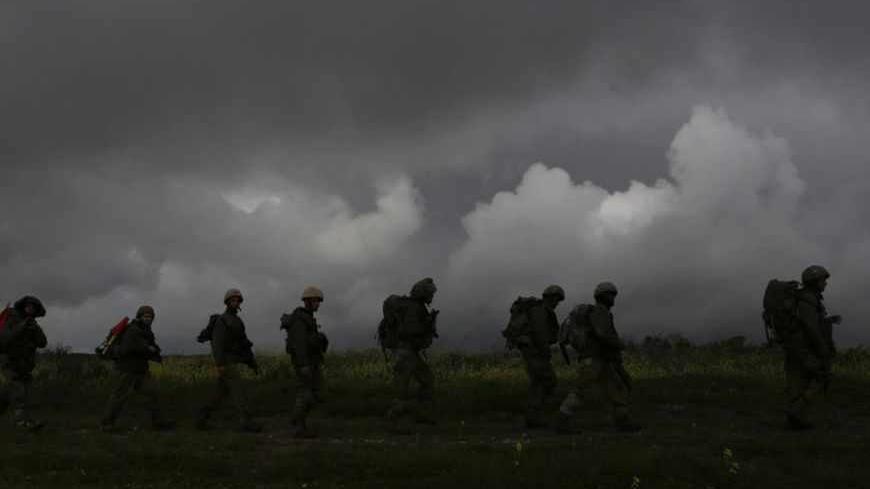 Israeli soldiers from the Nahal infantry brigade take part in a drill in the Golan Heights, near Israel's border with Syria March 5, 2013. - REUTERS/Baz Ratner

The Syrian army’s response to the May 21 Israeli violation of the cease-fire line on the Golan represents its first direct retaliation against Israel since the late 1980s.

The Syrian General Command of the Army and the Armed Forces announced in a statement that same day, “[O]ur armed forces destroyed an Israeli vehicle that entered from the occupied territories and crossed the cease-fire line towards the village of Bir Ajam. The village is located in the liberated area of Syrian territories where there are armed terrorist groups.” It also stated, “Following that, the Israeli enemy fired two rockets from the occupied site of Tal al-Faras toward one of our sites in al-Zubaydiah village; no casualties [were] reported.”

For its part, Israel acknowledged that Syrian gunfire had hit one of its patrols, damaging a vehicle and prompting its troops to fire back.

The Syrian military response appears to have been made without awaiting instructions from the political leadership, as per the orders issued by Damascus following the May 5 Israeli air strikes on Damascus. Regardless, how should one interpret Syria’s handling of this incident? Is it a message to Israel that the government of President Bashar al-Assad will no longer tolerate Israeli aggression? Does the seriousness of Syria’s assertions that it will indeed respond to all future attacks represent a new policy toward Israel and abandonment of the classic Syrian dictum of responding “at the right place and time”?

In a phone interview with Al-Monitor on May 22, Qadri Jamil, deputy prime minister for economic affairs and minister of internal trade and consumer protection, described the Syrian military’s response as “a legitimate right” according to all international conventions on sovereignty. Jamil made clear that he was speaking as a member of the leadership of the Popular Front for Change and Liberation, the opposition coalition in the Syrian parliament, not as a member of the Assad government. He reiterated that after the Israeli raids of May 3 and 5, Syria had warned of retaliation in the event of another penetration of its border or cease-fire line.

SANA, the official Syrian news agency, reported the army’s May 21 statement as saying “that any breach or an attempt to violate the state sovereignty will be responded [to].” The army also taunted, “[W]hoever thinks that he is able to test our strength, alert [sic] and readiness to maintain our dignity and sovereignty is mistaken.”

Syrian MP Faisal Azouz told Al-Monitor on May 22, “[Syria] will not remain silent from today onwards toward any Israeli aggression, and she was completely aware, despite her internal suffering, of the risk that could come from Israel.”

Azouz claimed that the Syrian army has the power and ability to confront any new Israeli attacks. He confirmed that instructions had been “given to all Syrian troops to respond to any violation, even without waiting for the leadership decision, and to undertake a direct response once they are attacked.”

When asked about Israeli threats to respond to Syrian retaliation, Deputy Prime Minister Jamil asserted that the Israelis are “not serious, especially in the current circumstances, because the situation will be complicated more than it is now,… and the international community will not allow a new confrontation.” He added that the army has defensive means for dealing with any attack on Syrian territory.

The General Command’s statement on the exchange of fire alleged that the Israelis, with their penetration of the cease-fire line, were attempting to raise the armed opposition’s “collapsed morale due to the painful blows they received at the hands of our armed forces in more than one place, especially in [al-Qusair].” The statement further claimed that the incident confirmed Israeli involvement in events in Syria and accused Israel of “direct coordination with the armed terrorist gangs,” that is, the armed opposition.

When asked his interpretation of the incident, Jamil responded, “The Israelis did not like the upcoming political solution [Geneva II], so they wanted to ruin it or to declare themselves as a negotiator under the table.” He added, “This is not their right because they are the cause of most of Syria’s problems.”

The Syrian minister also explained, “The achievement of the Syrian army in al-Qusair and the government progress toward a political solution upset both the US and Israel, thus the Syrian response was carrying a message that [they should] stop messing with the national security and sovereignty of Syria.”

MP Azouz considered that the Israeli breach of Syrian territory was meant “to send a message that Israel is ready to assist the armed groups, especially after their losses in al-Qusair.” He added, “Israel is not interested only in Syria’s internal situation, but is aggressing on Syrian territory in a rude and clear way and is engaged directly in support of its tools in Syria,” the reference to “tools” meaning the Syrian armed opposition.

Akram al-Akrami, a member of the opposition’s Executive Office of the National Coordination Body, speaking on the Syrian military’s response, told Al-Monitor on May 22, “We were waiting a long time. [A response] should not have been postponed to this time, but should have been done at the time of the Israeli raids [on May 5].”

He added, “The Syrian response of destroying an Israeli vehicle is a simple retaliation and is not equal to the raids carried out by Israel. It must be the heaviest and most powerful response, such the opening of the Golan front.”

Akrami claims, however, that war will not erupt between Syria and Israel. He observed, “The Israelis do not want the Syrian weapons to be directed on them, because they are very happy today with the internal conflict that destroys Syrian military and economic capabilities without any effort by Israel.”

Despite the shots fired on May 21, the question remains whether the Syrian army is ready to respond to Israeli interference. Hisham Jaber, a Lebanese retired brigadier general, claimed in an exclusive interview with Al-Monitor on May 22 that the Syrian army is in a state of permanent readiness to contain an Israeli attack and that the army still has more than 90% of its combat capabilities.

Jaber said that the Syrian army has respectable assets, even during the current crisis, including commando teams, aerial weapons and missiles that have not yet been used and others that it has recovered. He added that the US military is aware of the high caliber of Syria’s air defense and concluded that the Syrian leadership is capable of responding to Israel and to deterring it. Jaber described the Israelis as having taken advantage of the Syrian government’s occupation with the civil war to target Damascus.

Concerning the objective of the Golan violation, Jaber assessed, “What Israel is doing is harassing Syria, because it is not pleased with the remarkable achievement of the Syrian army against the armed opposition. Israel is trying through its intelligence services in Syria to confuse the Syrian army.”

When asked about Syria’s readiness to open another front with Israel, Jaber contended, “If Syria opens the front against Israel, it will change the rules of the game, and the armed opposition would lose its moral pretext to attack the Syrian army from behind.” He added, “Syria will not start a war, but of course, it will respond to any attack.” Jaber asserted that Assad is content with the internal situation.

In regard to Israeli threats and warnings to Syria, Jaber said that Israel had violated the truce, and the Syrian response had come naturally. He claimed that Israel also has no interest in launching a war because it would turn into a regional conflict. Hezbollah and Iran would intervene, and the most Israel could hope to achieve would be to occupy the buffer zone in the Golan. Such Iranian involvement would mean US involvement and the fall of the Gulf states. He also ruled out a broader international war because the United States does not want one.