Will Syria Retaliate For Israeli Airstrikes?

If Syria is going to retaliate for Israeli's recent strikes, it is unlikely to do so soon, alone or in a manner that would lead to a comprehensive war, observes Haytham Mouzahem in an examination of official statements. 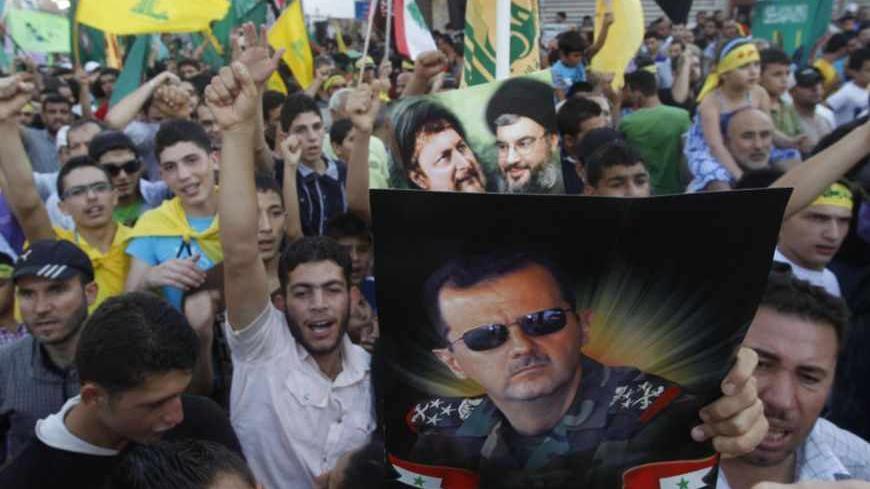 Since the reported Israeli air strikes on Syria on May 3 and May 5, speculation has been rampant about whether Damascus will retaliate. Here is some of what has been said by Syrian, Lebanese and Israeli officials and assessments of their words and past deeds by actors close to the parties involved.

A few hours after Israel's May 5 attack, Syrian Deputy Foreign Minister Faisal al-Miqdad told CNN, “When they attack, this is a declaration of war. This is not something that is [new]. We dealt with this on several occasions, and we retaliated the way we wanted, and the retaliation was always painful to Israel, and they will suffer again.”

Speaking with AFP on May 7, Miqdad announced, “Syria will respond to the Israeli aggression and will choose the moment to do so.” He added, “It might not be immediate because Israel now is on high alert. We will wait but we will answer.”

On May 9, AFP reported Miqdad as saying, “The instruction has been made [to the army] to respond immediately to any new Israeli attack,… and our retaliation will be strong and painful. There is no way Syria will allow this to happen again.”

Furthermore, at the end of an emergency meeting on May 5, the Syrian government announced, “This aggression opens the door to all possibilities” and declared Syria’s right to defend the homeland “by all ways and means.”

Ali Haidar, minister for national reconciliation affairs and former opposition member in the Syrian government, criticized this statement on the grounds that it “is not in proportion to the incident.” He added, “The cease-fire with the enemy is ended, and there is no escaping a swift response in all places, including the Golan Heights.”

Syrian President Bashar al-Assad, in his first comments on the air strikes, stated during a meeting on May 7 with Iranian Foreign Minister Ali Akbar Salehi, “The Syrian people and its army … are capable of confronting Israel's ventures.”

Despite the threats of retaliation, after assessing these statements in light of Syria’s actual history of striking back, one might conclude that Damascus will instead avoid any type of escalation that holds the possibility of leading to a comprehensive war with Israel. It might, however, consider responding through allies or proxies.

On May 7 Haaretz reported Anwar Raja, spokesperson for the Popular Front for the Liberation of Palestine General Command (PFLP-GC), as allegedly saying that his Damascus-based group had received a “green light” from the Assad government “to attack Israeli targets” from the Syrian-controlled section of the Golan. In the same report, however, the Israeli newspaper also cited a “senior member” of the group apparently tempering Raja’s remarks.

The PFLP-GC, headed by Ahmad Jibril, does not possess sophisticated weapons, but it could mount a limited response. The big question today is what will Hezbollah do?

Hezbollah Secretary-General Hassan Nasrallah asserted on May 9 in a televised speech that Syria’s strategic response to the Israeli strikes had been its decision to supply his organization with “game-changing weapons.” He offered, “Syria’s response to Israel’s air strikes was to tell Israel that if your goal is to prevent boosting the capabilities of the resistance then take note.... [Syria] will provide [Hezbollah] with sophisticated weapons that the resistance has never obtained before.”

Nasrallah added that Syria's second response had been to open the Golan front, to liberate it from Israeli occupation, emphasizing that Hezbollah “would stand with the Syrian popular resistance and offer material and spiritual support.”

On May 8, Hussein Shaykh al-Islam, adviser to the speaker of the Iranian parliament, told al-Mayadeen TV that the timing of retaliation will be decided by the “resistance axis,” not by Israel, adding that the response will not be limited to only Syrian, but involve the entire axis. Does that mean Hezbollah will retaliate?

A source close to Hezbollah told Al-Monitor that it is unlikely the party will seek revenge for the sake of its Syrian ally. First, this revenge would drag the so-called resistance axis into a war that would not serve its goals at this time, especially since Syria is engaged in fighting “terrorist groups” and the opposition factions. Second, the Lebanese people are divided on the issue of Hezbollah's arms and its raison d'être as well as by its involvement in the Syrian war. In the event of a new war with Israel, the March 14 coalition would blame Hezbollah for provoking it and being responsible for the inevitably bloody consequences. Memories of the 2006 war with Israel live on in Lebanon.

A former Lebanese minister who leads a party close to the Syrian regime told Al-Monitor, “Certainly, there will be a response, but according to the Syrian timing and not the other’s timing.” When asked whether Syria was ready to go to war with Israel, he responded, “Despite the ferocity of the internal war, all possibilities are open. Any comprehensive war would involve Iran and Hezbollah. Syria’s friends — Iran, Iraq, Russia, China and others — will not leave her alone, and they will cooperate to not allow her to fall.”

Would a war now with Israel serve the Syrian regime and its allies? Walid Sukaria, a Lebanese MP in Hezbollah’s Loyalty to the Resistance bloc, said to Al-Monitor, “War with Israel is not in Syria’s interest and, therefore, the Syrians and the forces of resistance would not respond now, unless Israel launched a war on Syria.”

Sukaria, a retired brigadier general, said that Israel is trying to drag Damascus into war to weaken the Syrian army’s capabilities and indicated that the decision to go to war is not Syria’s alone, but also would involve Iran and Russia. He asserted that Israel would not dare to attack Lebanon at this point in time.

In a sign of confidence that Syria would not immediately retaliate, Israeli Prime Minister Benjamin Netanyahu left for a scheduled visit to China a few hours after the May 5 strikes. Yair Golan, commanding general of Israeli forces on the Syrian and Lebanese fronts, was quoted on May 6 by Reuters saying, “There are no winds of war.”

Some observers believe that Assad's army is exhausted as it continues to battle Syrian opposition forces and jihadist groups. The regime is now weak. They believe Damascus should have retaliated against Israel in 2007, when it was stronger, in an effort at deterrence following the attack on the Deir el-Zour facility. It is too late for that now, but the Syrian regime has nothing to lose by confronting Israel. Perhaps it will come to this same conclusion after realizing that any future aggression will weaken it further and lead to its collapse.

As an Arab proverb says, “When I am drowning, why would I fear getting wet?”