Turkey’s Syria policy neglects the security of its citizens and borders. 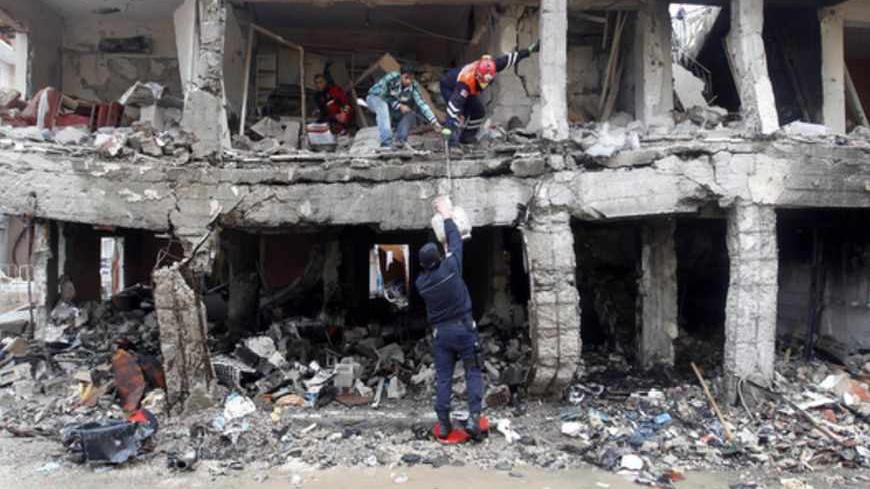 Search and rescue officers work at a damaged building at the site of blast in the town of Reyhanli in Hatay province, near the Turkish-Syrian border, May 13, 2013. - REUTERS/Umit Bektas

The decision in August 2011 by Turkish Prime Minister Recep Tayyip Erdogan and Foreign Minister Ahmet Davutoglu that Turkey would like to see Syrian President Bashar Assad brought down and replaced by the Muslim Brotherhood was not prompted by a vital exigency related to Turkey’s stability and security, but rather was a function of  ideological preference.

There was no rational reason that forced the Turkish government to assume the task of toppling Assad for not heeding Turkey’s advice and oppressing his opposition with unwarranted violence.  There is no international accord that has assigned Turkey as a guarantor of Syrian well being.

There is nothing in international relations that justifies the responsibility the Turkish rulers took on for what was happening in Syria and then trying to set it right. This interventionist approach could only be attributed to a misreading of history. Ankara’s Syria policy is one of choice.  As such, when assessing the destabilizing effects of this policy on Turkey and on the region, you can’t come up with a single mitigating circumstance that would free the Turkish government from its responsibility.

One should examine the disastrous consequences of two car bombs in Reyhanli from this angle. There were 49 killed, 51 seriously wounded and 100 ambulatory injured. Among the damaged structures were 735 workplaces, 121 residences and 62 vehicles. This was a flash spillover of the Syrian civil war to Turkey.

Reyhanli was a scene of devastation that shocked the entire country. A local court in Reyhanli imposed a nationwide reporting ban about this event purportedly in the “interests of the investigation.”

We know that the real cause behind this blatant media censorship is the fear that more exposure of the Reyhanli tragedy could damage the political interests of the Justice and Development Party (AKP) government.

Of course, Syria is the point of origin of this attack. The message conveyed to Turkey via violence and terror certainly goes beyond “welcome to real Middle East." Those who wrote this message in Syria and sent it to Reyhanli perceive an existential threat from the AKP government’s Syrian policy. The message to Turkey is, "Give up this policy or we will bring the war to your country."

How was the message carried to Turkey? Most likely, it came via the Turkey-Syria border that Ankara had smeared to better implement its Syria policy.  A news item in Milliyet on May 12 attributed to police sources said before the Reyhanli attack, the Baath regime’s secret service Al Muhabarat and its cohorts in Turkey packed one ton of C-3 explosives into secret compartments in the minibuses and then sent them across the border.

Ankara has been pursuing a pro-Ottoman, Islamist (and therefore a pro-Sunni) Middle East policy. While deciding to topple the Baath regime, it also opted to blur the Turkey-Syria border without officially declaring war on Syria and without sending the Turkish army into that country. The expression “blur the border” is in the title of the latest report of the International Crisis Group.

Ankara intentionally neglects border security to allow the Free Syrian Army and international jihadists to use the Turkish soil along the border as rear base in their war against the regime.

A blind eye had to be turned on border security to enable Syrian and foreigner fighters of the FSA and Jabhat al-Nusra, which publicly announced its al-Qaeda affiliation, to freely cross from Turkey to Syria, fight there and return with no hassle. Of course, such freedom was also needed to move guns and equipment from Turkey to opposition forces.

But we saw how despite blurred borders, Turkey cannot be immune to negative consequences. It is through Reyhanli on that very border that bombs intended to be used to send messages to Ankara by massacring innocent civilians are transferred to Turkey. Ankara’s Syria policy is not producing security. On the contrary, it creates a security deficit and instability, and that negative outcome is affecting Turkey.

Then we must ask: Does Turkey have a security policy? If Ankara had an approach that looked after the security of its citizens and that recognized that peace and stability in the region could only be assured with a responsible and realist national-security policy, how could it have applied its current ambitious and aggressive Syria policy? And finally, how effective is Turkey’s NATO-oriented security concept when it comes to Syria?

Let’s start with the last question. NATO cannot provide Turkey with security and deterrence as long as Turkey insists on its current Syria policy. This was proven at Reyhanli. Deployment of NATO Patriot missiles in Turkey has become irrelevant after the Reyhanli blasts.

Now to other questions.

If the AKP government had a valid and rational security policy, it wouldn’t have applied this Syria policy despite all its ideological inclinations, and wouldn’t have left our borders wide open to external threats.

If the AKP government  had a policy that prioritized the security of its citizens, it would not have implemented this extreme and disproportional Syria policy despite its now clear deficiencies in the intelligence, military and institutional fields as well as in intellectual capital, human resources and economy.

If the AKP government had developed a Syria policy that gave priority to security of its borders and its citizens, it wouldn’t have sent out invitations to terrorism.