If Turkey doesn't change its partisan, sectarian approach to Syria, it will provoke further sectarian tensions among armed groups in Turkey and the region, writes Kadri Gursel. 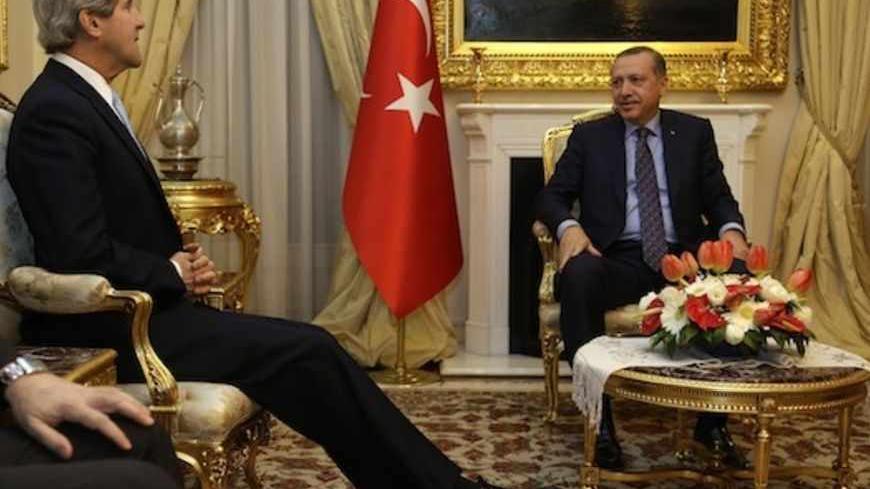 Let’s begin by reading some paragraphs from a speech that captures Turkey’s new profile in the Middle East, complete with its policy, ideology and, of course, rhetoric. International readers who follow Turkey closely will guess who the speaker was. These quotes are long, but not boring:

"Today they are saying prayers for us. They are praying for us in Gaza, Beirut and Mecca. This is the massive responsibility we are shouldering.  You are not only responsible for Edirne, Hakkari and Van. You are bearing the responsibility for Nicosia, Sarajevo, Baghdad, Gaza, Jerusalem, Erbil and Damascus. There is the responsibility for 250 innocent Syrians who were viciously massacred yesterday [May 4] by having their throats slit at Banias. I am appealing to my organization. Every life lost in Syria is one of ours. … We don’t care who says what. What we care about is the conviction that 'Believers are brothers.' ...

"We are not like other states. We are not a state that will keep quiet to protect its interests. We want to be able to account for ourselves when the book is placed in front of us. When screams of slaughtered children are resonating, we can’t be mute devils. You, Bashar Assad, you will pay for this. You will pay heavily, very heavily for showing courage you can’t show to others to babies with pacifiers in their mouths. A blessed revenge will smother you. With God’s permission we will see this criminal asked to account and bless his almighty. What is going on has long reached the point of forcing the limits of tolerance. The international community has not yet taken the steps expected from it about Syria. ... To the Syrians who ask when is God’s help coming, I say there is no doubt God’s help is near."

I took these lines from a May 6 news report in the daily Milliyet. When you read it, you'll see that the speech was on May 5, and that from the references to cities, the speaker was from Turkey.

In its content and style, this text is a perfect specimen of the Islamist, pro-Ottoman political culture that has spread and gained strength in Turkey over recent years. Those who apply the norms of traditional diplomacy and statesmanship that prevail in international institutions to this text might surmise that that the speech was given by a fiery Islamist orator. But these remarks belong to Prime Minister Recep Tayyip Erdogan of the Turkish Republic — generally assumed to be a secular state.

He was addressing members of the parliament and officials of his ruling Justice and Development Party (AKP). The venue was the town of Kizilcahamam, near Ankara. The meeting's purpose was a discussion of party policies.

The prime minister often gives these kinds of talks. Whenever he does, Turkey’s political culture becomes more closely attuned to the Middle East.

The debate in Turkey drags on: What is the reality of Ankara’s Syria policy? What have we reached with this policy, what results did we obtain and how would it affect Turkey if we persist without making changes?

To answer these questions, a reality check is needed that goes beyond Turkey’s feverish, epic-heavy rhetoric. Objective and cool-headed observations from outside become important at times like this.

An April 30 report by the International Crisis Group, "Blurring the Borders: Syrian Spillover Risks for Turkey," represents a significant contribution that objectively narrates the results of Turkey’s response to the Syrian crisis — and the risks it poses for the country.

The follow assessments made in the report's executive summary illustrate the gap between Erdogan’s rhetoric and realities: "Turkey is seen increasingly as a partisan actor. While Turkish leaders claim it has sufficient resources to be the region’s main power, leverage over Syrian events is clearly limited. ... Turkey has no capacity to solve intractable problems inside Syria alone, and is not considering significant military intervention. Stepped-up arming of opposition fighters seems unlikely to enable them to topple the regime quickly. And Turkey’s wishful thinking about the Ottoman past and a leading historical and economic role in its Sunni Muslim neighbourhood is at odds with the present reality that it now has an uncontrollable, fractured, radicalised no-man’s-land on its doorstep."

In the same section of the report, Turkey is asked to accept that the Syrian crisis may continue for a long time and to make long-term political modifications accordingly. The Syrian crisis served as a litmus test that exposed the neo-Ottoman tendencies of those running Turkey’s foreign policy. By definition, the pro-Ottoman inclination of the neo-Islamist ruling political class is also pro-Sunni. Turkey’s Syria policy has put Turkey on the Sunni side of the Sunni-Shiite fault line in the Middle East. This gives rise to a perceived geopolitical threat among Shiite actors.

The report warns on this tendency: "Whereas Turkey in 2008 was praised for its ability to speak to all regional players from Israel to Iran, it has now aligned predominantly with conservative Sunni Muslim partners such as Qatar and Saudi Arabia… In order to talk to all parties from a position of greater moral authority, it should avoid projecting the image of being a Sunni Muslim hegemon. It should also re-secure its border and ask Syrian opposition fighters to move to Syria. Publicly adopting a profile of a balanced regional power, rather than a Sunni Muslim one, would likewise do much to reduce any possibility that the sectarian polarization that is crippling Syria will jump the border to Turkey, in particular to Hatay province."

The International Crisis Group suggests that Turkey not follow a tacitly Islamist foreign policy, but rather a secular one. This is an appropriate recommendation. Of course, to follow a foreign policy not imbued with Islamism, the Islamists have to make extraordinary efforts. But if this Islamist, pro-Sunni and pro-Ottoman Syria policy is maintained in its current form, Turkey will find itself in opposition to alienated Muslim actors who are not conservatively Sunni. This will substantially weaken Turkey's soft power in the Middle East and the world and will limit its ability to launch initiatives.

A pro-Sunni foreign policy and narrative could also upset the already sensitive sectarian harmony in Turkey.

Turkey decided in August 2011 to topple the Baath regime and open its borders to the armed Syrian opposition, thus making Turkey the rear base of rebel forces. Border security was intentionally neglected to ease the movements of rebel forces. To change this policy now, and to act again as a state of law and order, may lead to a loss of prestige and influence by Ankara over the armed opposition, especially the Free Syrian Army. But if this risk isn't taken, the consequence will be that Turkey will substantially fall short of having a state of law. The Turkish-Syrian border may pose threats to Turkey’s security, as seen in the Feb. 11 bombing at Cilvegozu border crossing [Bab al-Hawa] that resulted in the deaths of 14 people.

In addition to internal clashes in Syria mutating into a sectarian civil war, the danger for Turkey involves its image as a party to this war — and the possibility that it may be held responsible for its share of the war crimes committed by Sunni groups it has been militarily supporting.

To be sure, there is a political price to be paid by Turkey for changing its Syria policy — but the cost of not changing it will be higher.