With Syria's oil reserves divided between Kurdish and opposition forces, some fear a clash over the country's energy resources. 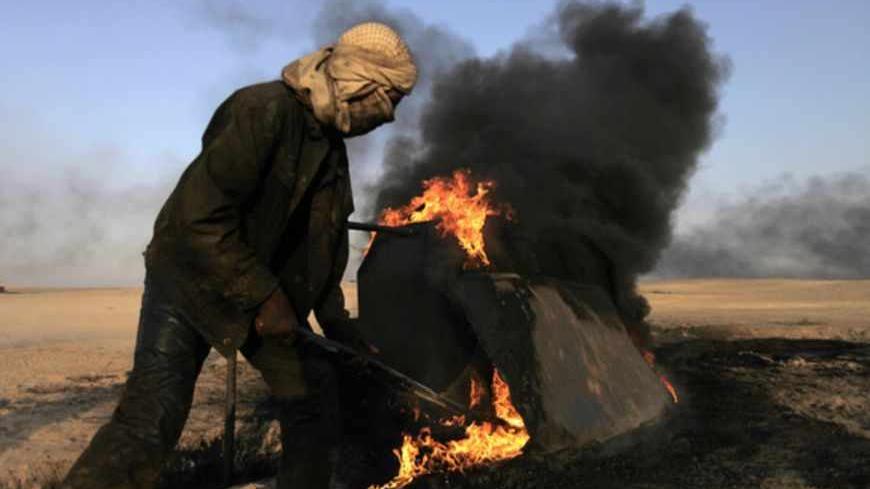 A man works at a makeshift oil refinery site in al-Mansoura village in Raqqa's countryside, in Syria, May 5, 2013. - REUTERS/Hamid Khatib

MALEKIYYAH, Al-HASSAKAH PROVINCE, Syria — The province of Hassakah is the Syrian oil tank. Before the revolution, its 170,000 barrels per day accounted for more than half of the country's oil production, thus representing the backbone of those oil exports covering a third of national export revenues. Syrian oil engineers working in the province told Al-Monitor that the Democratic Union Party (PYD) — affiliated with the Kurdistan Workers Party (PKK) — currently controls around 60% of the oil fields, leaving the remaining 40% in the hands of several factions of the Arab opposition. Since the conflict engulfed the route of the pipelines to the refineries, however, the drills have stopped working.

Despite such a fragmented context, the European Union on April 22 decided to lift the oil embargo on liberated regions in Syria in an attempt to support the opposition. The move, though, is likely to stir up Kurdish-Arab strife and catalyze regime raids on a region that has largely remained immune to the conflict so far. The war for control of Syria’s energy resources has not even started, but mutual allegations are already circulating between the parties involved, which accuse each other of cutting power supplies and dealing with the regime.

Exporting crude oil to Europe would encourage ethnic strife, but Syria’s rebel-held areas urgently need to produce or import fuel, electricity and gas to meet the basic needs of the population under its control, unless the undesirable option of trading with the regime is brought back to the table. For the time being, the few energy resources available remain prey to looting and black-market dealing.

In Hassakah, the response to the European call for oil trade with the Arab opposition's Syrian National Coalition (SNC) has been largely negative. The PYD doesn't recognize any SNC power over its territories and sees the proposal as an attempt to encourage Arab offensives against Kurdish-held areas. The Free Syrian Army (FSA) compares it to plundering as long as there is no transitional government on the ground.

"We consider the EU offer as if they are spurring Arabs to seize our regions and sell oil through the SNC," Aldar Khalil, a veteran PKK fighter and one of the most influential PYD leaders, told Al-Monitor. "For us, the only body entitled to take decisions on oil trade is the KNC (Kurdish National Council)."

"We're against selling oil before the collapse of the regime or until the formation of a transitional government in Syria," Maj. Muntasir al-Khalid, commander of the FSA Military Council in Hassakah, told Al-Monitor. "For the moment, oil sales would be an organized theft of the wealth of Syria, as the wells are in the hands of different factions."

To add further complications, the al-Qaeda linked Jabhat al-Nusra, believed to be the best organized within the opposition, is not subject to the FSA leadership. Jabhat al-Nusra already controls the Ali Agha well in nearby Rmelan.

The regime is also not likely to accept any initiative in the oil trade. “In order to accept the EU offer, the PYD and the opposition need a no-fly zone, as the regime would shell any oil cargo," predicted an electric engineer in the Oil Ministry's department of Hassakah and Rmelan, who spoke on condition of anonymity.

While the door of foreign exports is temporarily closed, the lack of oil has also affected the production of associated gas and, consequently, electricity. The internal supply routes are hindered by hostilities between Kurdish and Arab factions.

"The Sueidia power plant covers around 200 megawatts, so that before the uprising we used to rely on 150 megawatts from the Tabqa power plant in Raqqa to cover the provincial needs," the electric engineer told Al-Monitor. "But now Tabqa is blocked by the clashes and the power needs have almost doubled, reaching 700 megawatts, due to the lack of government control over consumption."

The Baathist regime intentionally compelled oil-rich Kurdish regions to rely on power plants and refineries located in other provinces, but now the Arab opposition is accused of adopting similar practices. "Both Tabqa and Mabrukeh power plants are still supplying Deir ez-Zor, whereas they cut electricity in our direction," PYD's Khalil said. Such allegations were denied by an employee responsible for the maintenance of the power plant in Mabrukeh when contacted by Al-Monitor. The outcome is that Kurdish-populated cities such as Amuda only enjoy a few hours of electricity per day.

Despite mutual accusations, power cuts affect all regions regardless of their ethnic composition. "Blackouts are not necessarily planned by one side or another. In the Arab-Kurdish Tell Tamr the mills serving the whole city are suffering from power shortages, even if the electricity comes from the [Arab-controlled] South," Ayman al-Ahmad, an Arab opposition activist from Hassakah told Al-Monitor.

On the other side, the PYD is accused of cooperating with the regime in managing oil resources. On April 16, some government documents published by the Syrian weekly Jisr indicated an agreement between the Oil Ministry, the military intelligence and the PYD to allow the latter to guard the wells in Rmelan.

"The PYD took over the wells on March 1, but oil kept flowing toward the government refinery in Banyas until approximately March 20, when some Arab phalanxes closed the valves in Tell Hamis," the electric engineer said.

"We have to choose between the current deprivation and the return to drill and pump oil toward Banyas," Khalil said.

"Everything imported from abroad has a double cost: We paid $12 for each gas cylinder coming from Iraqi Kurdistan. The Syrian-subsidized price of a gas cylinder is 425 Syrian pounds (less than $3 on the black market), but it's actually sold at 3,500 Syrian pounds ($25) by PYD supporters," an employee from Sueidia gas plant who spoke on condition of anonymity told Al-Monitor.

The option of keeping the oil flowing toward government refineries is harshly criticized by the Arab opposition as a form of support to the ongoing massacres. Nevertheless, some oil workers claim that even Arab armed groups are easily corrupted by the regime. "We know that the regime happened to pay some factions of the opposition to protect the passage of oil pipelines between Hassakah and Deir ez-Zor," an oil engineer working for the same government department in Rmelan told Al-Monitor.

Besides the need to boycott the regime without viable alternatives, smuggling is dramatically affecting the availability of petroleum products. “We monitored the distribution of oil fuel (mazout) coming from Iraqi Kurdistan through the Supreme Kurdish Committee between November 2012 and January 2013,” recalled Zorab Ali, a young activist from the Amuda Group (Tajammu Amuda). “Twenty-five thousand families were supposed to receive the tanks, but only 6,000 actually did.”

The mazout is mainly refined at home through rudimentary dangerous techniques. “Homemade refining could lead to diseases caused by the inhalation of hydrogene sulfide (H2S),” warned the oil engineer from Rmelan.

“The international community needs to put pressure on the Syrian regime to allow us to import petroleum products from Iraqi Kurdistan in exchange for crude oil,” the electric engineer in the Oil Ministry said. “Upon the arrival of the hot season, we will risk a cholera contagion without enough fuel to clean the streets.”

Andrea Glioti is a freelance journalist who covered the first five months of the Syrian uprising from inside the country. His work has been published by The Associated Press, IRIN News, openDemocracy, The Daily Star (Lebanon), New Internationalist and numerous Italian and German newspapers.