Can Rafsanjani Save Iran’s Economy?

Whoever wins the Iranian presidential election will face a daunting economic challenge. 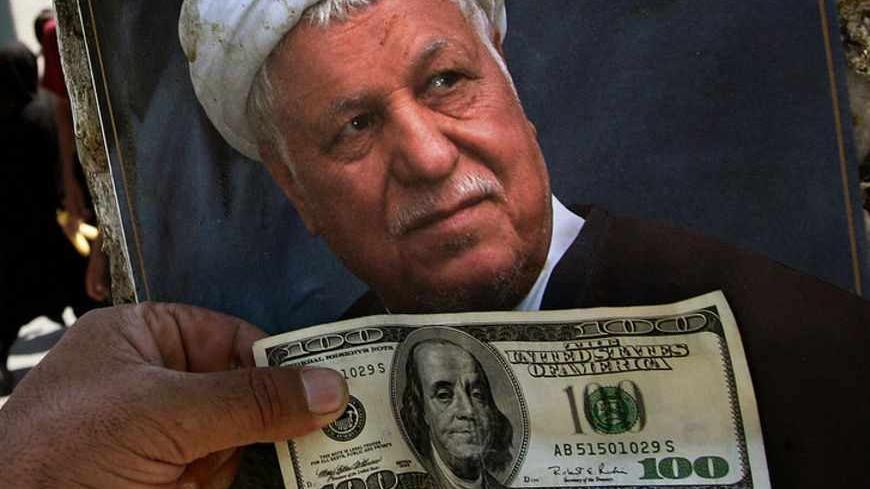 On May 11, when news emerged that former president Akbar Hashemi Rafsanjani might register for the upcoming presidential elections, the free currency market froze for a few hours. Some currency exchange bureaus even announced that hard currency rates would not be announced until it was known whether Rafsanjani had registered as a candidate.

While the last-minute nomination came as a surprise to many, it could be expected that the news would lead to a positive response from the key economic and business players in the country. Immediately after his registration, the price of gold coins (a main indicator of market trends) and foreign currencies started dropping. In fact, the Iranian rial appreciated by about 4% compared to the US dollar within one day.

More interesting than the market reaction was the emergence of news that segments of the powerful Motalefeh Party (the representative of the old merchant community in the Bazaar) would support Rafsanjani in the race. This is a very significant development as the Motalefeh had traditionally always supported the conservative candidates in Iranian elections. However, it also indicates that even the Bazaaris expect Rafsanjani to play a more positive role in managing the economy as opposed to other leading candidates.

There are diverse reasons for the overall positive reaction of market players to Rafsanjani’s candidacy. Emotionally, Rafsanjani is still known as the politician who put an end to the Iran-Iraq war in 1988. He was the one who persuaded then-Supreme Leader Ayatollah Khomeini to drink the “chalice of poison” and accept the cease-fire with Iraq. That day was one of the most significant turning points in modern Iranian history and some believe that a similar event will be needed to generate a new positive momentum. This historical fact bears symbolic significance, particularly when we realize that many Iranians compare the current conditions to the economic misery that had dominated Iran in the 1980s. Rafsanjani is seen as the political figure who can restore some normalcy in the Iranian economy.

Furthermore, Rafsanjani was Iran’s president during the post-war reconstruction era when many of Iranian industries were revived and when the country invested heavily in  building domestic capacity. The same industrial units that emerged under Rafsanjani (and later Khatami) presidency, were dealt a heavy blow under the Ahmadinejad policies. Therefore, many industrialists and market players hope for a more balanced set of economic policies in a Rafsanjani government.

Finally, Rafsanjani has always been seen as a pragmatic “crisis manager” in Iranian politics. Not just for the political elite, but also for many average citizens, Rafsanjani is a more credible political figure to address the current crises in the economy, foreign policy and domestic affairs. Approaching the age of 80, Rafsanjani is also seen as an experienced politician who will not allow the same type of trial-and-error mentality that the Ahmadinejad camp produced over the past eight years.

For one, he would have to reverse or alter some of the damning processes that the Ahmadinejad government has unleashed. For example, he will have to find a pragmatic way to continue the subsidy reforms without undermining the Iranian industry and without adding to the already existing inflationary pressures. To restore confidence among key economic players, he will also have to inject a sense of sustainability in the regulatory environment for businesses.

Furthermore, the new government would have to deal with a transformed economic scene compared to the 1990s.  Not just the volume of economic activity, but the diversity of stakeholders create new challenges and complexities. In the 1990s, the government sector was the dominant player in the economy — today, the share of non-governmental military, religious and revolutionary foundations and cooperatives is higher than the government’s.  Ahmadinejad has also intentionally decentralized economic management and planning giving more powers to the provincial stakeholders creating a scene in which regional and provincial bargaining processes over government investments will become more intricate.

Another sphere of complexity is the impact of external sanctions and how Rafsanjani could influence that parameter in Iranian policy-making. He is known for his more conciliatory approaches, but he will have to maneuver within the internal constraints of the country’s political constellation and he cannot be certain about the policy directions in Washington and Brussels.

All in all, Rafsanjani, should he be elected, would face enormous challenges in navigating the Iranian economy back to a growth economy. The one similarity between the post-war era and today’s Iran is the massive need for capital formation and job creation — a consequence of misplaced government policies in the past eight years. Should he be elected, Rafsanjani would inherit an economy that will be in need of major government investments, but a government that won’t have the same level of domestic and international resources as the country did in the 1990s.

The one facilitator in the event of Rafsanjani’s victory will be the return of seasoned technocrats and former ministers who served in the Rafsanjani and Khatami governments. It can be expected that those technocrats, who in the meantime have experienced marginalization and economic activity in the private sector, would return with a better understanding of what is needed in the country’s economic management. A new attempt at deregulating the Iranian economy could prove to be more efficient this time due to the experiences of the past few years.

It is obviously too early to predict a Rafsanjani victory as there is still time for election maneuvers and alliances. However, it is a conceivable scenario that Rafsanjani will win and will be tasked with managing the complex Iranian economy. One fact that will help him in the election is the new wave of support that he is receiving from reformist constituencies in Iran. Former president Mohammad Khatami and other reformist entities have already endorsed Rafsanjani. In fact, as opposed to 2005, when he was distrusted by the reformists, today he represents an indisputable position of having stood up against the clamp-down on reformist forces after the 2009 elections.

Interestingly, the main phenomenon that helped Mahmoud Ahmadinejad win the election against Rafsanjani in 2005 may actually help the latter this time. In 2005, Rafsanjani represented the “establishment” and was beaten by the young, anti-establishment figure. This year, because of his famous July 2009 Friday prayer sermon, Rafsanjani represents the anti-Khamenei position — a fact that could improve his chances this time.

Bijan Khajehpour is a managing partner at Atieh International, the Vienna-based international arm of the Atieh Group of Companies, a group of strategic consulting firms based in Tehran.